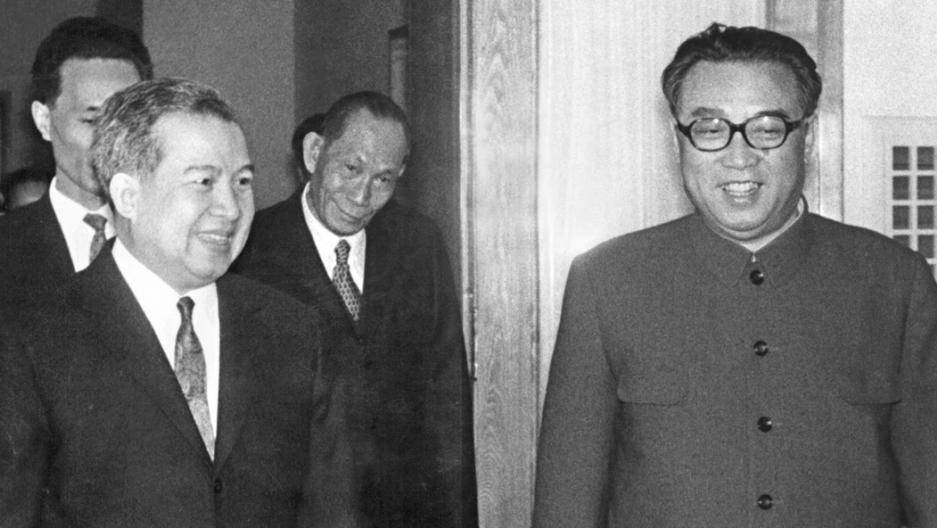 The flamboyant former prince, a national figurehead who oversaw independence of the erstwhile colony from French overlords, will leave one memorable legacy: He was among the last members of a clique of Asian despots who steered their nations during the Cold War.

I learned that when, three years ago, I was lucky to get a tour from a Cambodian prince of the private palace grounds. The king-father was being treated for various illnesses in Beijing at the time, the prince explained, “and had all his North Korean bodyguards with him.”

That’s because, I learned, Sihanouk was best friends with North Korea’s Kim Il Sung, who died of a heart attack in 1994 — and whose friendship forged an odd, brotherly alliance of nations that continues today.

The pair met in Jakarta, Indonesia in 1965, at a conference of “non-aligned” leaders who were trying to find their own path amid the worldwide battle between Soviet communism and American capitalism. He soon broke off relations with South Korea, declaring the North the only legal sovereign of the peninsula.

Sihanouk struck amity with the “Great Leader,” who later offered the monarch his own palace near the North Korean capital of Pyongyang. While Cambodia was locked in a civil war throughout the 1970s, Sihanouk languished for a few months every year in his North Korean home, making a series of films starring North Korean actors.

“He maneuvered among people he felt might support his idea of Cambodia,” said David Chandler, an emeritus professor at Monash University in Australia. That included “anyone else who was unhappy with the US side of the Cold War.”

In his 2005 memoir, Sihanouk wrote that Kim was “my surest and most sincere friend and the most steadfast in my support. Even more than a friend: a true brother and my only 'true relative' after the death of my mother.”

Today, North Korea and Cambodia have continued their quirky and close friendship. Cambodia has fallen mainly under Chinese influence over the past decade, receiving more than $8.2 billion from 2006 to 2012. But North Korea has kept whatever footprint it can.

The North Korean artist group, the Mansudae Art Studio, is helping build a $10 million national museum near Angkor Wat, the 900-year-old temple ruins near Siem Riep that hold enormous national symbolism for Cambodians, even appearing on the Cambodian flag.

Since the early 1990s, the North Korean government has also run a chain of restaurants in Siem Riep and the capital of Phnom Penh, a venture that brings the regime much-needed foreign currency. The eateries are rare spots where South Koreans get direct contact with North Koreans who are not defectors, because they’re served by pretty North Korean waitresses.

Cambodian Prime Minister Hun Sen, who holds power in the country while the monarchy has largely taken a ceremonial role, has added pragmatism to Sihanouk’s approach. The strongman caters to companies from South Korea, which is the second largest investor in the country behind China, while taking in the occasional North Korean delegation.

But Hun Sen’s personality cult, at least in terms of rhetoric, isn’t far from what would be expected from the Kim dynasty. In the classic flamboyance of Asian leaders, Hun Sen holds the ridiculous title, “Samdech Akka Moha Sena Padei Techo,” or Illustrious Prince, Great Supreme Protector and Famed Warrior.

The prime minister’s antics make him, along with Sihanouk and Kim Il Sung, a sort of autocratic kindred, even though the Cambodian leadership is far less despotic than North Korea.

So, farewell King-father Sihanouk, as we remember your legacy of building relationships with “non-aligned” leaders, even if that be the Eternal Leader of North Korea himself.