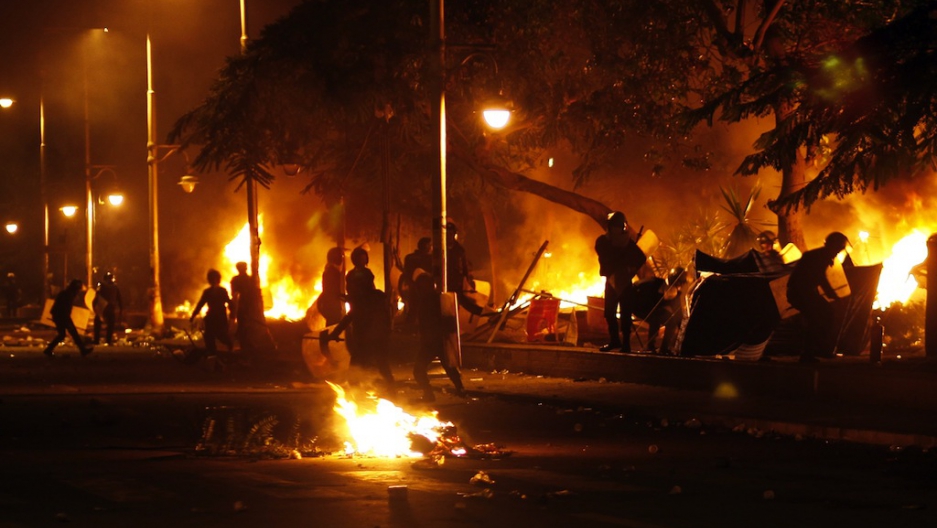 Egyptian riot policemen set fire in the tents of the protesters in front of the gate of the presidential palace in Cairo on February 1, 2013, as people took to the streets across the country in a show of opposition to Morsi and his Muslim Brotherhood. Egyptian security used water cannon and fired shots into the air as protesters threw petrol bombs and stones into the grounds of the presidential palace.
Credit: MAHMOUD KHALED
Share

If confirmed, the move reflects growing public anger in Egypt over the death of an activist rumored to have been tortured while in detention and a recent video allegedly showing police beating a naked civilian.

The report came as the US State Department also responded to reports of violence, with spokeswoman Victoria Nuland telling reporters: "Egyptians participated in their revolution in order to bring democracy, in order to bring rule of law and freedom for all - not more violence, not sexual assault, and not looting," reported Reuters.

"We strongly condemn the recent violence and the attacks that have taken place in Egypt," she continued, saying the US leaders are "extremely disturbed by these incidents, including sexual assaults against women and the beating of a defenseless man last week," according to Reuters.

Similar concerns reportedly prompted Arab's resignation, but it was not immediately clear whether or not the move had been approved by the Prime Minister -- this is the third time Arab has tried to leave office, reported  Al Masry al-Youm.

If he succeeds, Arab will be Egypt's third culture minister to resign since Mubarak's overthrow two years ago, according to Egypt's Ahram Online.

Agence-France Press, citing state media, said Arab had been angered by the video allegedly showing police brutality but Saudi Arabia's Al-Arabiyah said the official MENA news agency did not give a reason.

An unidentified source reportedly close to Arab told Ahram Online: "He has been in a bad emotional state since the [video] incident and he kept repeating that he does not want to continue in his position anymore."

Egyptian authorities apologized on Saturday for the video, but details surrounding it remain in debate, reported The New York Times on Sunday.

Also today, Al-Arabiyah cited witnesses as saying that police used tear gas in Tanta to break up protesters attending the funeral of the activist who died after being held by the police.