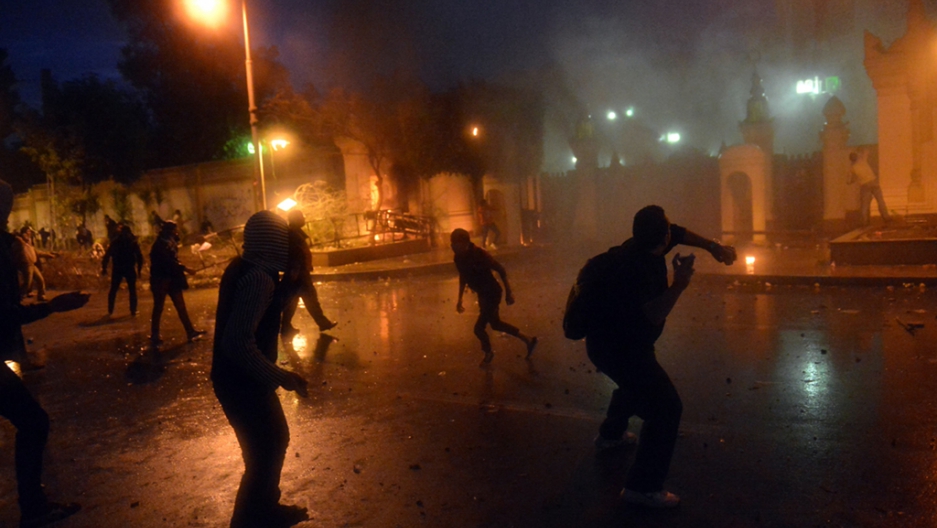 Egyptian protesters throw stones during clashes with riot police in front of the presidential palace in Cairo on Feb. 1, 2013, as thousands of Egyptians flooded the streets in a show of opposition to the Islamist President and the Muslim Brotherhood. Egyptian security used water cannon and fired shots into the air as protesters threw petrol bombs and stones into the grounds of the presidential palace.
Credit: Khaled Desouki
Share

CAIRO, Egypt — Thousands of protesters returned to the streets of Egypt on Friday, many of them battling with police in a call to overthrow President Mohamed Morsi.

The president, in a tweet Friday, said security forces will "deal firmly" with violence against state institutions, even as demonstrators tried to set his presidential palace aflame.

"The most intense clashes are outside the presidential palace, where protesters threw at least one Molotov cocktail that landed near or inside the palace grounds," says GlobalPost's Senior Correspondent in Egypt Erin Cunningham.

Some protesters are fighting using fireworks as weapons, while police unleash tear gas on the crowds. Police also have burnt tents belonging to a sit-in.

"This will likely escalate throughout the night," Cunningham says.

The Muslim Brotherhood, the Islamic organization that dominates the government, announced it is ready to "defend the legitimacy of the president."

But a Brotherhood spokesman insisted that the group will not send supporters to the presidential palace. In a previous instance, in December, at least eight people were killed when pro- and anti-Morsi demonstrators clashed outside the palace.

President Morsi said he plans to hold responsible political groups that called for protests if investigations reveal they took part in the violence.

Egypt's main opposition coalition, the National Salvation Front, said it was leading an anti-government march to the palace, Voice of America reported.

Protesters had vowed to remain peaceful.

"We are going out tomorrow, to Tahrir, and there is a group going to the palace," Ahmed Maher, a founder of the April 6 youth protest movement, said on Thursday, according to NBC News.

"We also confirm our peacefulness and that weapons must not be used, because we see that violence, weapons and Molotovs have cost us a lot," Maher added.

On Thursday, representatives of Egypt's opposition, including secular, leftist and liberal groups, met with the Muslim Brotherhood.

The meeting did not address opposition leaders' demand that Morsi form a national unity government, The New York Times reported.

The opposition and the Brotherhood did, however, sign a joint statement denouncing violence, according to the Associated Press.

Leftist leader Hamdeen Sabahi said in a statement Thursday night that signing the peace initiative did not mean an end to protests. He said he would not enter into dialogue until the bloodshed ended.

"Our aim ... is to complete the goals of the glorious January revolution: bread, freedom and social justice," he said, according to NBC News.

The AP noted that the meeting between the Brotherhood and the opposition may have caused rifts among the opposition, with some groups criticizing the Front for signing a statement that seemed to focus on protester violence without mentioning excessive force used by the police.

Men wearing black shirts of mourning also marched through the Suez Canal city of Port Said, the scene of the worst violence in a week of protest.

"There is no God but God and Mohamed Morsi is the enemy of God," they chanted, carrying pictures of those killed in the latest violence, according to Reuters. "We will die like they did, to get justice!"

Friday is also the first anniversary of a soccer stadium riot that killed 70 people last year.

More on GlobalPost: Egypt protests: Can the army keep the peace?