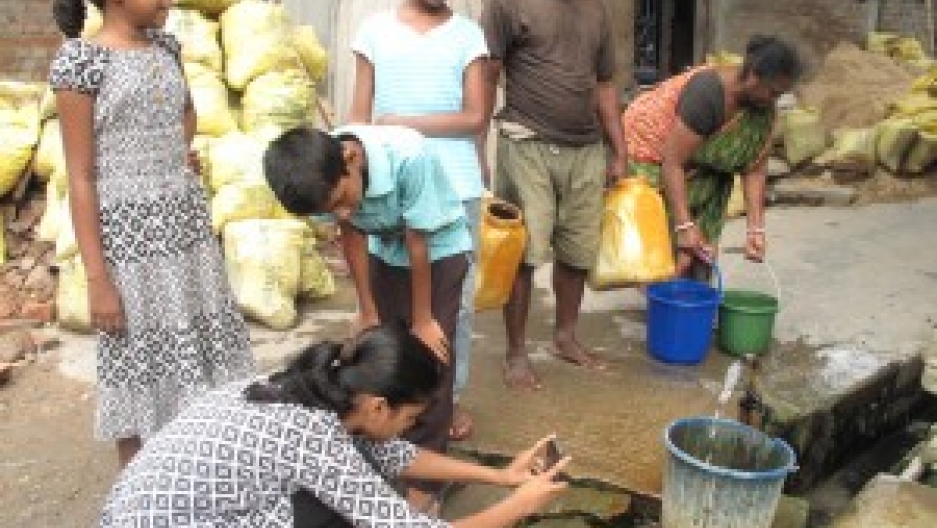 Shikha Patra, 14, center, and her friends conduct a water survey to document the lack of clean drinking water in their community. (Photo by Rhitu Chatterjee.)

In the heart of Kolkata, on the edge of the railroad tracks, is a sprawling slum. Hundreds of tiny huts and small brick houses sit along a maze of narrow streets.

Just outside the slum, new roads have been built and modern apartment complexes have sprung up, but here the people have been left behind.

Most homes don’t have toilets. Infectious diseases are common. Residents don’t even have access to clean drinking water.

But 14-year-old Shikha Patra is determined to change that.

Patra and some younger kids from this neighborhood have gathered around a public faucet, a simple pipe that sticks out of the ground.

While women wash dishes and clothes and fill their empty buckets, Patra asks them questions.

Patra explains that she and her friends are conducting a community water survey. She asks the women about the quality of the water.

Patra types their responses, along with the address of the nearest house, into a smartphone.

All of this information is directly uploaded from the phone to a database. It’s how Patra and her friends are documenting the absence of drinkable water in the community.

Patra plans to create a map with that data and use it to demand clean drinking water from the local municipality.

“Our number one priority right now is water,” she said. “It doesn’t matter what it takes, how many years it takes. But we must bring drinking water.”

This is one of many projects Patra and other kids in the neighborhood are working on as part of a child-driven community organization called Prayasam.

Working with children is not what he had envisioned. He intended to work with adults to address public health issues.

Ganguly recalls trying to convince parents to take simple measures, like washing their hands with soap, to prevent the spread of infectious diseases. Time and again he met with the same cynical response.

“They said, ‘We don’t have any time, and we don’t have to listen to this rubbish,’” Ganguly recalled. “If I’m talking about giving them drinking water, or toilets, or something, they will be interested."

But the adults were unwilling to take responsibility for improving their lives themselves.

Just as he was about to give up on the project, something unexpected happened.

“Some of the children who were listening to all these conversations for days long, they approached me and said, ‘Can you work with us?’” he recalled. “So I said, ‘Why not?’”

Today, Prayasam works with more than 600 children, some as young as 5 or 6. They live in slums all over Kolkata.

Ganguly meets regularly with small groups to review and guide the work they’re doing, but it is the children who decide what problems to tackle — and how.

The children often use music and art to educate community members. They also engage the media and push government officials to pay attention to the slums’ problems.

Turning a Dump into Playgrounds

One of the group’s initial successes was battling a garbage dump that sat next to people’s homes.

“The smell from the garbage was so strong that it hung in the air, everywhere,” said Shibashish Ghosh, who was among the kids who led that fight. “It killed people’s appetites.”

At first, Ghosh and his friends approached community elders for help.

“They said, ‘We’ll think about it.’ Well, they kept thinking,” he said. “In the meantime, more and more garbage from distant places was being dumped there.”

So the children decided to act.

Ghosh and his friends held rallies and performances all over the neighborhood. They invited a famous singer to help their campaign. He’d written a song about the need to clean up Kolkata.

The singer and the kids performed the song in the middle of the garbage dump. That brought media attention.

Local papers featured the kids and their work, the city was shamed into taking action, and the dump was removed.

Today, two playgrounds sit where the garbage dump was.

Ghosh now works for Prayasam, and he tells the younger kids in the organization the story of the playgrounds. He says it demonstrates the power young people can have.

“I want them to know what we have accomplished with hard work,” he said. “Nothing should stop you from trying.” In fact, the word prayasam means to try.

Patra, the 14-year-old girl conducting the water survey, works with the younger kids in her community. She helps them organize and execute a range of projects.

Patra says working with Prayasam has given her a new sense of who she is.

“Before, my identity was either as my grandfather’s granddaughter or my father’s daughter or as someone who lives in the house by the temple,” she said. “Now, they say, ‘Oh, that’s Shikha.’ Or, ‘That’s the girl who does surveys — or teaches kids to paint, or trains them in sports.’ I feel like they know me for who I am.”

It’s not just people within her community who know her for who she is. Last year, she and a friend traveled to Oxford University to present their work to an international gathering of social entrepreneurs.

Through her work, Patra says she has learned a lot about how to mobilize a community.

“People should feel, 'this neighborhood is mine — any developments, any improvements, will affect me, too,'” she said. “We don’t need our group to grow in numbers. But we do want this kind of thinking, this sense of ownership, to spread both within the group and in the rest of the community.”

She says a sense of ownership creates a sense of responsibility, and that is what drives a community to change for the better.