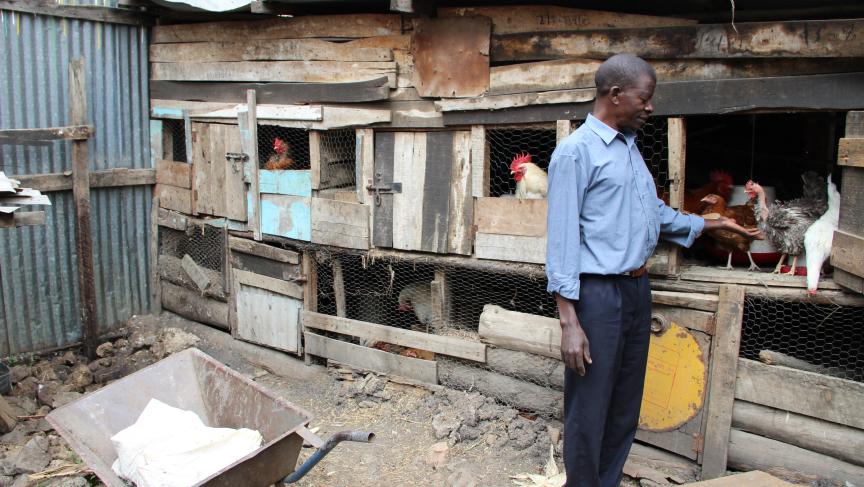 Francis Wajira raises chickens and goats in downtown Nairobi. He also teaches other residents how to raise livestock in the city. (Photo by Anders Kelto.)

In Kahawa Soweto, a slum on the northeast edge of Nairobi, Kenya, children chase each other down a narrow dirt road, passing women with water jugs.

It’s a densely packed area, and it’s not just people that live here.

“We have (chickens) here,” says Regina Wangari as she opens the door to a shack that she recently converted into a coop. “Outside we have almost 20 of them — here in the ghetto.”

Wangari lets the chickens roam freely around the slum, nibbling on bits of garbage and grass.

She also raises other animals. In a tight alley behind her shack, she keeps a dozen goats.

And in a shanty nearby, she has rabbit cages stacked from floor to ceiling. There are more than 400 rabbits in the small metal shack.

Raising livestock in the city isn’t new in sub-Saharan Africa, but it is a growing trend.

“It’s on the increase and, in fact, increasing faster than the rate of urbanization,” says Diana Lee-Smith, a food policy expert with the Mazingira Institute, an urban farmers education and advocacy group based in Nairobi.

Lee-Smith says that, for years, many African governments staunchly opposed allowing farm animals in cities. That’s because the animals produce waste, can transmit diseases and may cause traffic accidents.

But Lee-Smith says, in the past few years, there’s been a shift in the attitudes of some governments — including Kenya’s.

“Local and central governments are beginning to adopt favorable and supportive policies,” she says.

And that shift is partly due to the benefits of urban farming.

Livestock in the Slum: A visit to an urban farm in Kenya from PRI's The World on Vimeo.

“Livestock products are pretty perishable and hard to move around,” says Delia Grace, a public health researcher with the International Livestock Research Institute.

She says in developing countries where there is little refrigeration, it makes sense to keep livestock close to the cities. Grace says the most important benefit of urban livestock in the developing world is its impact on childhood nutrition.

Wangari, the woman who raises chickens, rabbits and goats, says her four children are healthy and strong.

“They are strong because we have everything here: milk, egg, meat, all those things we get free,” Wangari says.

Raising animals has also allowed Wangari to make a good income. She earns nearly $1,000 a month by selling eggs and chickens. That’s an incredible amount of money for a family in this area.

Wangari has invested some of that money in an egg incubator and is now selling more than 700 baby chicks per month, mainly to neighbors who want to breed chickens themselves.

Another urban farmer who has enjoyed great success is Francis Wajira, who teaches classes on raising livestock at his home in downtown Nairobi.

“We always have about five to 10 people almost daily visiting me, to come for the training,” he says.

Wajira charges about $6 per person, per session. That’s a hefty sum for many.

The fact that people are willing to pay it shows they value the instruction.

His small yard in a dense Nairobi neighborhood is overflowing with fruit trees, vegetables and animal pens.

But there’s an irony to the success of urban farmers here.

Wangari says her family has saved up enough money to buy a home in a more expensive part of Nairobi. But she hasn’t found a nice neighborhood that will let her keep her animals.