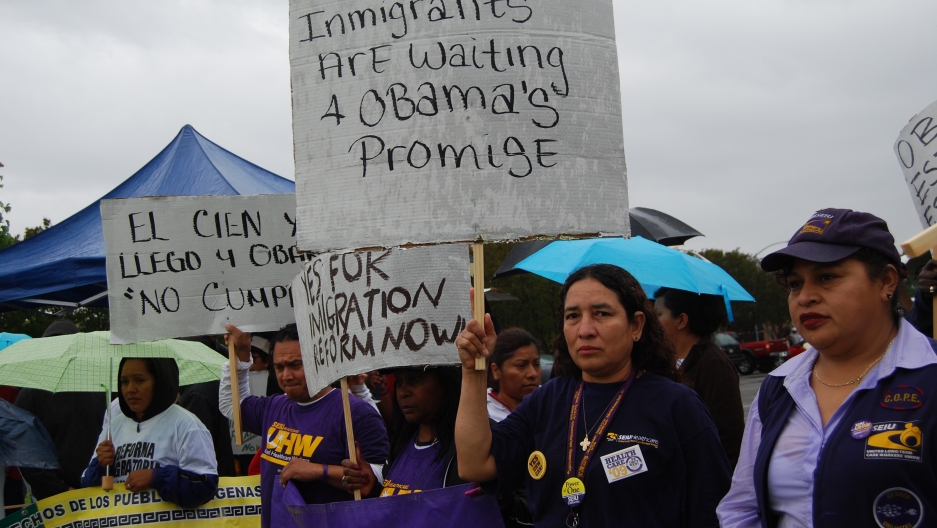 Still waiting: an immigration reform rally in Fresno, Calif. during the spring of 2009. (Photo: Jason Margolis)

President Obama has spoken a lot about the need for "comprehensive" immigration reform. That means taking on a lot: Securing the border, providing more visas, protecting worker's rights, and figuring out how to deal with an estimated 11 million unauthorized immigrants living in the US. That's a lot to sort out. Some argue, too much to take on at once, especially when the parties agree on small pieces of the immigration debate.

One of the downsides of this all-or-nothing approach is that a lot of immigration issues that have bipartisan support don't get done.

Nasif arrived at that 70 percent figure from university and think tank studies, along with statistics from W-2 forms that have mismatched social security numbers.

Every farmer will insist they check legal documents before hiring. But it's well known that phony documents are rampant on American farms. It's a risky game: Workers with fraudulent papers can get deported. The farmer can lose his workforce – and his harvest.

Politicians on both sides of the aisle agree that the system needs fixing. A bill in Congress called AgJobs has enjoyed bipartisan support. It offers a path to citizenship for undocumented agricultural workers and makes it easier for growers to hire temporary immigrant workers. But the bill has died, mostly because politicians couldn't reach a bigger compromise on the entire immigration problem.

Nasif said American agriculture can't go on like this.

"When the legislature wants to act on a sticky issue, such as immigration reform, they can do it very quickly," said Nasif, pointing to the example of Major League Baseball. When baseball teams exceeded their visa allotments, Congress quickly made things right in 2006.

"We have an adequate supply of outstanding baseball players in the United States. And so if anyone is taking jobs Americans would love to have, it's foreign baseball players," said Nasif.

(Nasif makes this point for effect, not because he wants foreign baseball players out of the country.)

Meanwhile, plenty of other interest groups want their own issues addressed as well. So-called "Dreamers," young people brought to this country illegally by their parents as children, want a path to citizenship. And then there are high-tech companies that want more visas granted to foreign engineers and scientists.

On tech worker and agricultural visas, Democrats and Republicans actually agree on key points. But as political scientist Mark Jones at Houston's Rice University points out, politics over who gives up what, or who gets what, in a massive immigration debate can kill smaller bills. With the AgJobs bill, the Democrats blocked it.

"They don't want to give away what they know is the one immigration reform that most Republicans want without getting something in return," said Jones.

Of course Republicans have stopped immigration-related bills that Democrats want too.

Frustrating, for many, but avoiding the piecemeal approach to immigration reform makes political sense to Edward Alden, a senior fellow at the Council on Foreign Relations.

"It's a very tough tactical question and it always has been. And the reason has to do with the most difficult issue of all, which is: Do you do some kind of legalization for the 10 to 11 million unauthorized immigrants living in the United States? And every time the discussion comes of doing immigration reform piecemeal, the problem is that that's the issue that gets left to last. And if that's the issue that left to last, it probably does not happen.

That's why many people on the bottom of the food chain in America — undocumented immigrants — favor going after comprehensive reform during this presidential term.

"It's harder to do, but it's harder if we keep another four years separating families, thousands of families," said Alain Cisneros, a community organizer in Houston with the Texas Organizing Project.

Cisneros said working immigrants without papers are basically trapped — they can't return to their home countries to visit family and they're afraid to speak out against abusive employers. When he came here, he worked as a janitor cleaning buildings in downtown Houston.

"Clean up every single night for hours, go and clean up the buildings. I see many, many people just come in and for any reason get fired. And the companies pay less, like in the black market. And (the workers) don't receive protection for the time working. I say, 'This is something wrong.'"

Cisneros said with comprehensive immigration reform, everybody's rights and needs will be on the table.

Like many who follow the immigration debate, Mark Jones at Rice University said if comprehensive reform has a chance of passing, now is the time.

"In the end, I think a lot will depend on what type of priority President Obama and the Democratic Party give to comprehensive immigration reform. If he really does make this the healthcare reform of his second term, it's likely to be passed," said Jones.

There are, of course, a lot of other important issues the president would like to address in the next four years. And don't underestimate party politics. Hispanic voters have been flocking to the Democratic Party, in large part, because of the Party's support for immigration reform. Jones said this puts Democrats in a position of strength.

"Really it's in the best interest of the Republican Party to remove this issue. For the Democrats, it's a win-win situation. Either they get the immigration reform they want, or they keep this alive as an issue that allows them to drive a wedge between the Republican Party and Hispanic voters, which means the Democratic Party just does better and better electorally."

In Washington, political gamesmanship can mean stalemate. There hasn't been meaningful immigration reform since 1986 when Ronald Reagan was president.