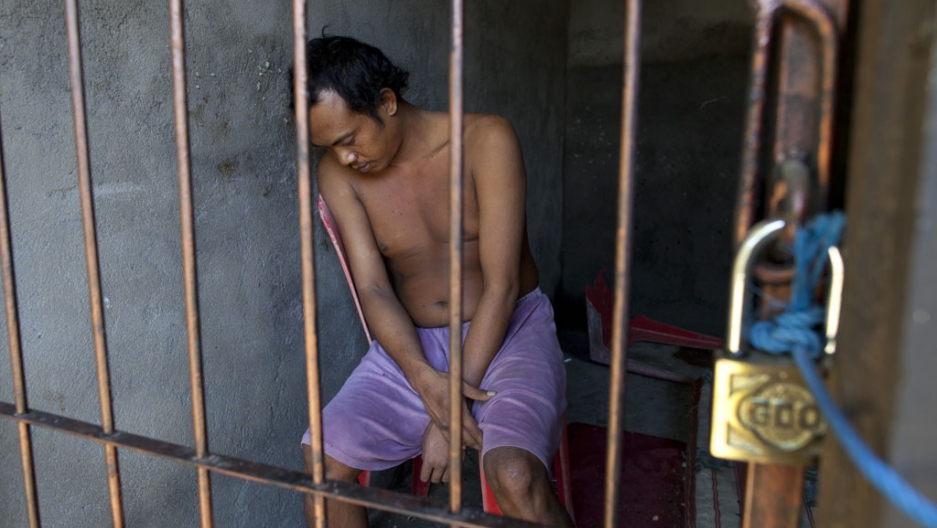 Gede, 35, sits in his cell May 5, 2012 in Buleleng, Bali, Indonesia. His family keeps him in a locked room to control him so he doesn't run away and disturb the community. Diagnosed with Schizophrenia, he has had mental problems since 2001 and has been hospitalized seven times. The Indonesian health ministry spends 2.3 percent of the total national budget on health care for a population of approximately 240 million people. Bali has a shortage of psychiatrists and one government-run mental hospital.
Credit: Paula Bronstein
Share

US Congress isn’t the only place where mental health discussions have surfaced recently.

The World Health Organization (WHO) discussed the latest draft of a new Global Mental Health Action Plan last week, which, if adopted, would set clear goals for progress and aim to improve accountability in improving mental healthcare around the world.

The action plan will be officially voted for at the World Health Assembly in May, but the draft of the plan received wide support at the recent WHO Executive Board meeting, according to Kelly O’Donnell, coordinator of the Mental Health-Psychosocial Working Group of the NGO Forum for Health, who attended the meeting.

The adoption of the action plan would represent a turning point in global mental healthcare, said O’Donnell.

“Regardless of income levels,” he said, “countries are really coming on board and rallying around the need to put policies and resources in place and calling on WHO to help with technical guidance.”

The National Alliance on Mental Illness gave the US a grade of “D” for mental healthcare in 2009. But statistics surrounding mental healthcare in low-income countries are more astounding. Between 76 percent and 85 percent of people with severe mental disorders receive no treatment in low and middle income countries, according to a January 11 WHO Executive Board Report by the Secretariat. Some other statistics, according to the 2011 Mental Health Atlas, include:

• Almost half of the world's population lives in a country where there is one psychiatrist or less to serve 200,000 people. Put another way, if that statistic held true in the United States, that would mean eight psychiatrists for all of Manhattan.

Delaney Ruston, physician turned documentary filmmaker, is now making a film about global mental health called Hidden Pictures. She has spent the last six years on this project, investigating mental health in India, China, South Africa, France, and the US. She said that in some places she went, she found it nearly impossible to find someone affected by mental illness—even leaders in mental health activist groups—willing to appear on-camera. Stigma against mental health disorders is so rampant in some places, she said, that some people affected by mental illnesses won’t even tell family members about their conditions.

In addition to the problem of stigma itself, she said, the field of psychiatry is not always well-respected in countries with the most stigma against mental illness.

“The marginalization or demeaning of the profession has been the same in many countries,” she said. “When you have a country where only one percent of the health dollars go toward mental health, it means that the focus on all aspects of mental health have been disregarded.”

In some places, filling a void of medical services are overcrowded hospitals with doctors who are not trained in mental illness, or perhaps worse, abusive psychiatric institutions. In October, Human Rights Watch published a video that examined “spiritual healing centers” in Ghana, where people with mental illness are severely abused.

Changing these deeply engrained barriers to adequate mental healthcare will not be easy, said O’Donnell. He said that the biggest sticking points to widely reforming global mental healthcare are funding and allocation of resources. These challenges will pose a problem even if the action plan is adopted this spring.

Still, O’Donnell has hope that this action plan might be the beginning of a sea change in mental healthcare around the world.

“What do I hope will happen? I really hope that there will be greater awareness, and that mental health will be integrated more into healthcare systems,” he said. “I hope and pray that the economic and social aspects that contribute to mental disorders will be better addressed.”