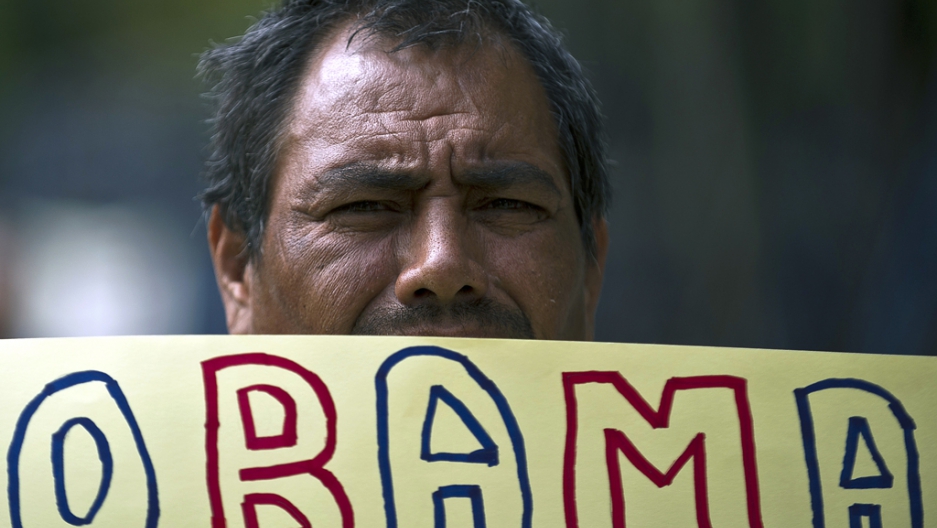 A Mexican man holds a sign during a protest in front of the US embassy against the failure of the US immigration reform, on Jan. 21, 2013, in Mexico City.
Credit: Ronaldo Schemidt
Share

BUZZARDS BAY, Mass. — What a difference an election makes.

It was not so very long ago that Republican presidential hopefuls were trying to outdo each other in their tough stances on immigration. With proposals ranging from Herman Cain’s electrified border fences to Mitt Romney’s “self-deportation,” it seemed that the GOP was intent on demonstrating just how unwelcome undocumented workers were in this country.

Then came Nov. 6, and a resounding victory for President Barack Obama.

Today, just days after the inauguration, eight senators are presenting a plan for immigration reform — and with bipartisan support, it may actually pass.

The Senate can hope to steal a bit of the president’s thunder by acting quickly. This afternoon it will unveil a "Bipartisan Framework for Comprehensive Immigration Reform," sponsored by eight senators, four from each party.

Politicians, too, heeded the wake-up call. With demographers predicting that the number of Hispanic voters could double by 2030, the GOP had to change its stance in a hurry.

Sen. Lindsey Graham (R-SC) said it best, even before the election.

“The demographics race we’re losing badly,” he told the Washington Post in August. “We’re not generating enough angry white guys to stay in business for the long term.”

Immigration reform is an important issue for Hispanic voters; many have relatives or friends who are in the country illegally, and they have naturally gravitated toward the party that promised an easier path to normalization of status.

Obama earned plaudits from Hispanics and scorn from Republicans when he issued an executive action in June lifting the threat of deportation from illegal immigrants who came to the United States as children. The Republicans called it “pandering,” the Democrats saw it as a shrewd ploy to drum up support in crucial battleground states.

Whatever it was, it seemed to work, and Republican lawmakers have seen the writing on the wall.

Immigration reform has been kicking around the Senate since at least 2001, when it was introduced by a Republican, Orrin Hatch of Utah, and Democrat, Dick Durbin of Illinois.

Called the DREAM Act (for Development, Relief and Education for Alien Minors), it very nearly passed in 2007, but Democrats were unable to overcome a Republican filibuster.

Since 2009, the legislature has been hopelessly gridlocked, and the mere fact that the president has called for immigration reform was enough to damn it in the eyes of many Republicans.

The new proposal will try and resurrect some provisions of the DREAM Act.

As John McCain (R-Ariz.), put it on ABC’s "This Week," “It is not that much different from what we tried to do in 2007 …. What has changed is, honestly, that there is a new appreciation on both sides of the aisle — including, maybe more importantly, on the Republican side of the aisle — that we have to enact a comprehensive immigration reform bill."

That appreciation was due in large part to the Republicans’ poor showing among Hispanics last November, he acknowledged.

"Look at the last election,” said McCain. “We are losing dramatically the Hispanic vote, which we think should be ours, for a variety of reasons, and we've got to understand that."

But McCain, who is one of eight sponsors of the new reform plan, might have a hard time selling the idea to others in his party, or even in his own state.

Arizona is the home of SB 1070, one of the country’s harshest anti-immigration bills. Many of the bill’s provisions were struck down by the Supreme Court this summer, but it still has enough teeth to make life uncomfortable for the state’s Hispanics, who make up 30 percent of the population.

The new bipartisan proposal hopes to address some of the problems created by SB 1070 and bills like it; for one thing, it will “strengthen prohibitions against racial profiling and inappropriate use of force.”

But one man’s “racial profiling” is another man’s “common sense.”

“I don’t have a problem with racial profiling,” said Connie Thomason, a retired stockbroker who lives in Tucson, in an earlier interview. “Some things are statistically more apt to happen with certain groups. What might appear to be racial profiling is actually just common sense.”

The framework is long on generalities, but a bit lacking in solid plans for implementation. It touts a “tough but fair” path to citizenship for unauthorized immigrants currently living in the United States, but does not explain whose definition of “tough” or “fair” will apply.

Furthermore, such a path will be contingent on “securing our borders,” another issue that has proved divisive over the years.

The proposal will be more lenient toward those who were brought to the United States as children, and will also create special terms for agricultural workers, who “have been performing very important and difficult work to maintain America’s food supply while earning subsistence wages.”

The Republicans hope that throwing their weight behind this reform will court favor among the nation’s Hispanics, and draw them to their side. They have put Marco Rubio, a senator from Florida, front and center as a party favorite, in a bid to woo the Hispanic vote.

As McCain pointed out, the Republicans feel that Hispanics, many of whom tend to be Catholic and socially conservative, should be a natural Republican constituency.

But it will be an uphill battle. Many Hispanics are used to thinking of the Democratic Party as their only choice, and it will take time for them to learn to trust a party of “angry white guys” that has been so unwelcoming to them over the years.

The proposal could still fall apart, stalled by the bitter partisan bickering that has become a hallmark of Washington. But for the first time in a decade, there is a real prospect that the long agony for undocumented immigrants might be nearing a solution.