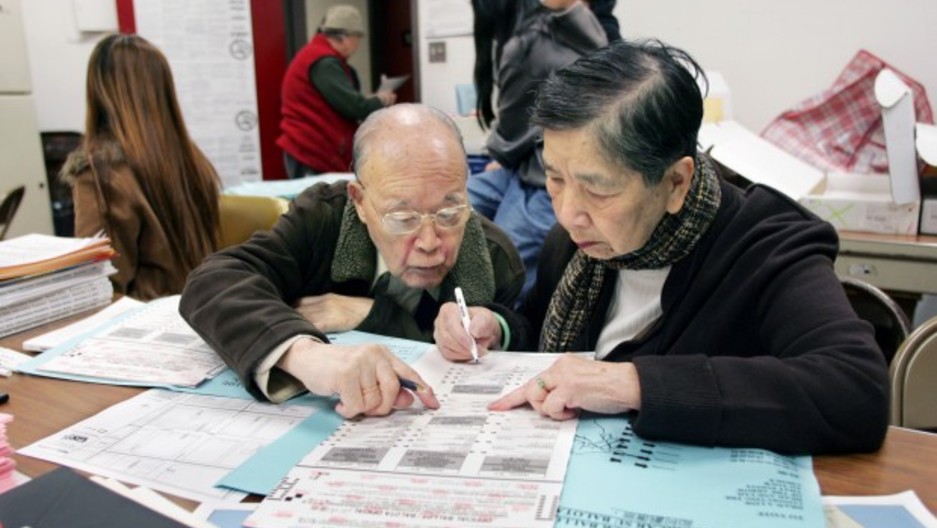 A Chinese-American couple sit down at a table to fill out their election ballot at polling station in the Chinatown section of San Francisco, November 2, 2004. Voters turned out in large numbers on Tuesday to deliver an unpredictable verdict on U.S. President George W. Bush and Kerry as the long, bitter and deadlocked White House race drew to a close. As many as 125 million Americans were voting to choose their leader for the next four years and set the country's course on the Iraq war, the fight against terrorism, the economy and foreign relations. REUTERS/Lou Dematteis US ELECTION Pictures of the month November 2004 LD/GN - RTRETVX

One of the fastest growing immigrant communities in the US are Asians.

While Asian Americans voted for President Obama this past election in record numbers, when it comes to the immigration reform it seems that the Latino vote dominates the conversation.

Andrew Lam, a Vietnamese-American writer and editor at New America Media talks with anchor, Marco Werman about how people in the Asian community are talking about immigration reform.

This is a highly debated subject among many groups says Lam, especially those Asian immigrants who came to this country as refugees.

"Some people feel that people who are undocumented are stepping in front of them in line for citizenship whereas they were law abiding and waiting patiently for years."