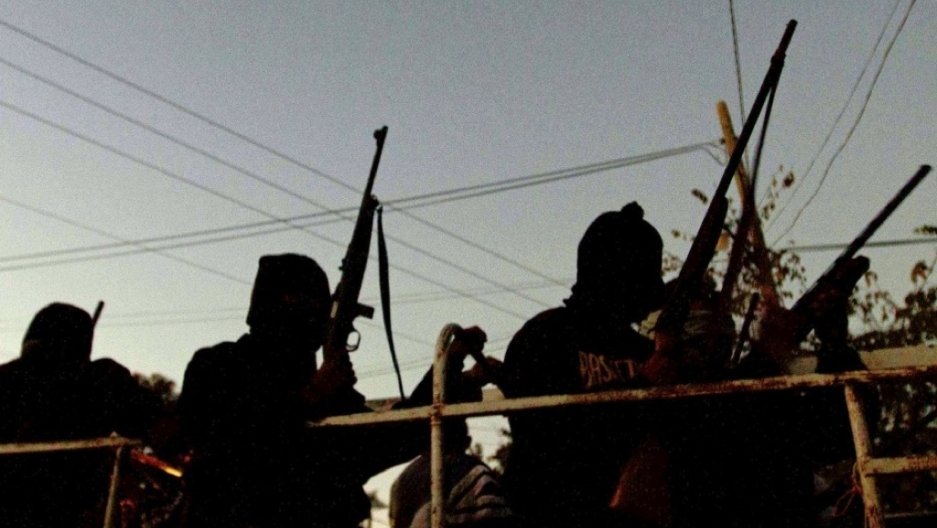 Hooded residents of Ayutla de los Libres, in the Mexican southern state of Guerrero, stand guard at a checkpoint on Jan. 19, 2013. Hundreds of civilians armed with rifles, pistols and machetes decided to create their own security squad for the communities of Tecoanapa and Ayutla de los Libres because of the presence of unidentified gangs committing robberies, kidnappings and murders.
Credit: Pedro Pardo
Share

MEXICO CITY, Mexico — For all the murderous mayhem that has haunted Mexico in recent years, its capital city has remained essentially untouched.

But recent carnage in Mexico state, enveloping the capital like a folded tortilla, has many worried that's about to change.

In response, federal and state officials have beefed up army patrols in the state's largest cities, hard on the capital's borders — and people are taking note.

“There's alarm in Mexico state,” reads the headline of the top story in Friday's Reforma, the capital's largest newspaper.

“The people have requested it and we are going to continue the operations," Eruviel Avila, Mexico state's governor, told reporters. He confirmed an increased reliance on military patrols.

Underworld hits are not unheard of here. And the gangs have assassinated top police officials in Mexico City in years past. Several capos have been arrested in the capital's finer neighborhoods.

But the city's poor barrios have largely avoided the massacres of small time drug dealers and gang lookouts that have spiked the violence in other cities.

Violence of the kind that has plagued Mexico's northern cities would unhinge a metropolis that serves as the heart of Mexico's political, entertainment and financial worlds — like Washington, DC, Los Angeles and New York combined.

That discovery came 18 hours after police gathered up six other victims, whose dismembered bodies were also left in trash bags near one of Toluca's principal avenues.

Officials blame the killings on a feud between La Familia Michoacana, a gang that federal police had declared finished more than two years ago, and two groups that deserted it.

“The criminal group is clearly identified,” Salvador Neme, chief of the state's public security department, said Wednesday in announcing the arrest of 11 alleged La Familia gunmen. “They are priority targets of the state and we will continue working for their detention.”

Federal officials had assured Mexicans the vicious Familia Michoacana was finished after security forces reported killing its messianic founder Nazario Moreno in December 2010. But the recent violence confirms that the group, dedicated to retail drug dealing, extortion and other rackets in Mexico, Michoacan and Guerrero states, is still very much a threat.

News reports last December suggested that Moreno, whose body was never recovered, may still be alive.

But the experience of Mexico state, which has been governed by the president's Institutional Revolutionary Party, or PRI, for most of the past century, suggests that may be difficult to do.

Pena Nieto, who assumed Mexico's presidency Dec. 1, finished a six-year term as Mexico state's governor 16 months ago. He handpicked Avila to replace him and much of the state's security apparatus has survived the change in administrations.

Banners hung in recent days and purportedly signed by the Familia Michoacana accuse top Mexico state security officials of allying with the breakaway groups, the Knights Templar and Guerreros Unidos.

"Where is your strategy?" sneers a comment directed at Pena Nieto, posted at the bottom of one news story about the latest killings and arrests. "This is the Mexico you want to promote internationally?”

More from GlobalPost: How Colorado and Washington could help end the drug war

Former President Felipe Calderon deployed some 50,000 soldiers, marines and federal police against the gangsters soon after taking office in December 2006. Analysts blame the move, which officials expected to be temporary, for unleashing the violence that's killed more than 60,000 people as rival gangs fight one another, and security forces, for control of drug smuggling routes and other rackets.

Like Calderon, Pena Nieto has repeatedly said he hopes to return the troops to the barracks as soon as police are capable of taking on the gangs. That remains the goal, however distant.

“The majority of us feel that the moment needs to arrive in which the states take responsibility for security," Miguel Angel Osorio, Mexico's interior secretary, said this week.