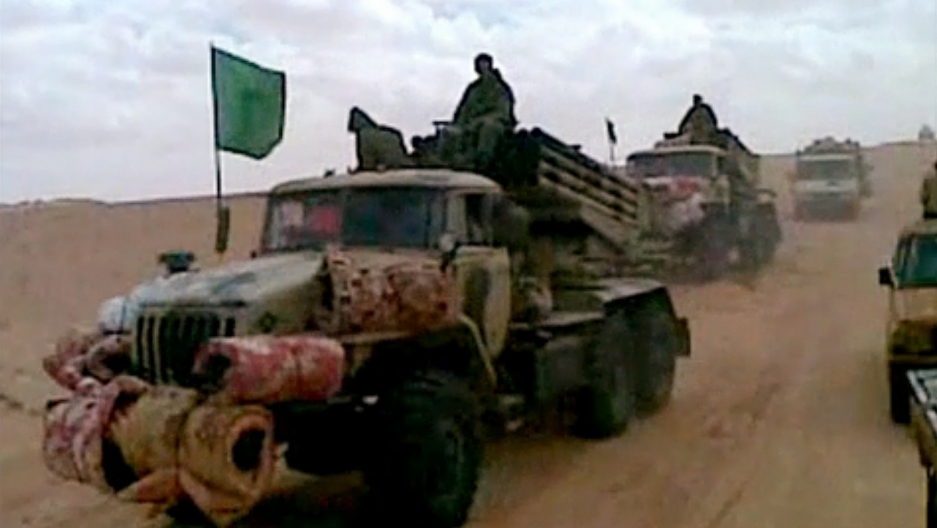 A picture grabbed from a mobile phone video shows rebel fighters in the Malian desert. The Arab Spring has enabled such groups to become more mobile.
Credit: STRINGER
Share

CAIRO, Egypt — The rise of Islamist movements following the recent popular uprisings in North Africa played a direct role in the hostage crisis that claimed more than 80 lives in the Algerian desert last week. And they’re set to become a defining characteristic of the region’s political landscape, analysts say.

The Arab Spring fostered an environment in which transnational Islamist movements from different countries can operate freely across the lawless Sahara and Sahel deserts, their numbers boosted by the release of militant jihadists from Egyptian prisons and the growth of ultraconservative Salafi jihadism in Tunisia. They’ve been armed with weapons from unguarded Libyan caches since the fall of Muammar Gaddafi.

The Algerian raid — in which dozens of militants seized a BP natural gas plant in the town of In Amenas on Jan. 16 — included at least 11 Tunisian and seven Egyptian attackers, an Egyptian intelligence official said in an interview. Weapons experts and Algerian officials have said their weapons came from Libyan stockpiles.

The transitions in Egypt, Libya and Tunisia have also helped militants by giving rise to weak governments.

“It’s helped spawn more room for radical Salafis, jihadis, what have you, to openly preach their ideals, but to also incite individuals to incite jihad,” says Aaron Zelin of the Washington Institute for Near East Policy.

Post-revolution governments in all three Arab Spring countries released dozens if not hundreds of former Islamist militants, many of whom had been unfairly tried or tortured in prison.

Some had engaged in an Islamist insurgency against the Egyptian government or fought with the mujahedeen in Afghanistan in the 1990s. And although most renounced violence, some have returned to militant activities.

Now they’re starting to attack what they see as obstacles to their goal of founding a pan-Islamic caliphate.

“We’re talking about low- to mid-level players who don’t necessarily pop up on the radar of the intelligence services,” Barak Barfi of the New America Foundation said about Egypt’s would-be jihadists. “But they are trying to reorganize constituent cells.”

The upending of regional intelligence agencies along with governments means they’re no longer monitoring and sharing information as before, he adds. “[The militants] have a whole array of places they can work now — in Sinai, or they can drift westward toward Libya, Tunisia and Algeria.”

Details about the Egyptians who fought in Algeria this week are scarce, including how long they were based in Mali or its environs under the organization established by the raid’s Algerian ringleader, Mokhtar Belmokhtar.

He fought against the Soviets in Afghanistan in the 1980s, where Al Qaeda chief Ayman Zawahiri first met Saudi Osama bin Laden.

“I wouldn’t be surprised if they knew each other,” he says, “or if there were recruiters or facilitators in Egypt who allowed individuals to get to the zone of war.”

US officials believe at least one Egyptian, Muhammad Jamal Abu Ahmad, to have been involved in last year’s attack on the US consulate in Benghazi, where Libya’s fledging government has struggled to assert control outside urban areas.

The sparsely populated deserts and mountain holdouts in Libya’s ungovernable hinterlands have made fertile ground for militants.

The New York Times quoted an Algerian official as saying the hostage takers staged the attack from the west Libyan border town of Ghat. Some experts believe they were armed with assault rifles and rocket-propelled grenade launchers culled from the robust weapons stocks of Gaddafi’s defunct army.

Libya has become a regional hub for weapons proliferation and smuggling since the dictator’s toppling, contributing to supplies from Gaza to Syria and Mali. Belmokhtar told a Mauritanian newspaper in 2011 that he had “benefited” from Libyan arms.

More from GlobalPost: Al Qaeda leader killed. Or was he?

Although few of those weapons are believed to have reached Tunisia, the rise of a vocal ultraconservative Salafi movement there has provided jihadists for militant groups at home and abroad, including the group that carried out the BP raid.

The previous regime’s crackdowns on even the most moderate Islamists had swelled support for more severe interpretations of Islam that are now flourishing in Tunisia.

Economic recession is helping, too. Ali Zeddini of the Tunisian League for the Defense of Human Rights says looser security and fewer crackdowns on mosques and imams have made it easier for militant Islamist groups to recruit young, impressionable men who are often unemployed.