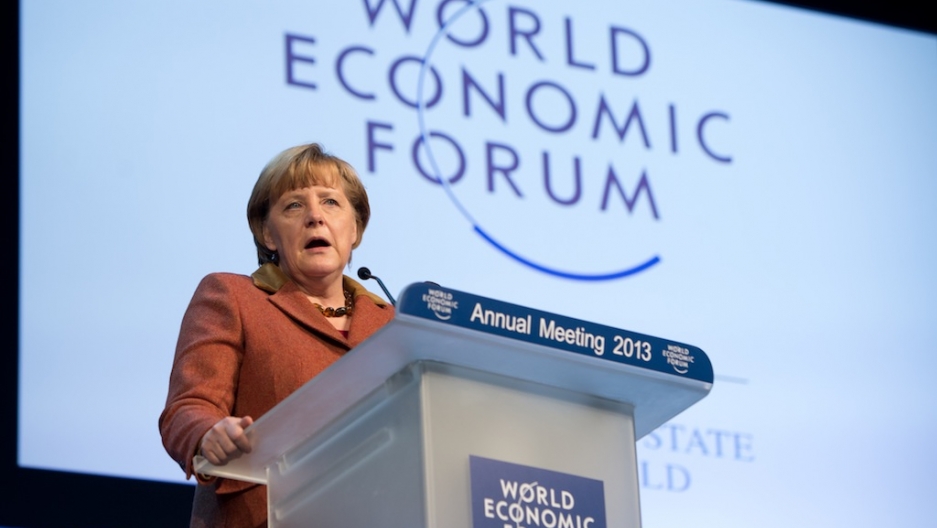 German Chancellor Angela Merkel addresses a session of the annual World Economic Forum (WEF) meeting in the Swiss resort of Davos. The WEF will see top politicians and business leaders pursue talks on whether they have seen the back of the global financial crisis. Meanwhile, the situation in Greece gets further out of hand.
Credit: JOHANNES EISELE
Share

Davos, Switzerland is a utopia. The blue sky is winter-clear and the white mountain landscape is dotted with chalets full of warm raclette and mulled wine. It's the perfect place to host the world's "one percent," the top political and business minds, who come together once a year in this most beautiful of places, to decide what's in store for the rest of us at the annual World Economic Forum.

Last year, the topic of concern at Davos was the Greek economic crisis. German Chancellor Angela Merkel convinced the other heads of Europe to crack down with severe cutbacks and austerity measures, much to the dismay of everyone in Greece.

This year, the crisis has only gotten worse, and despite their better hopes, it looks as though Merkel and the rest of Davos crew haven't been successful in pulling Greece out of its depression.

According to the Wall Street Journal, this year's theme is "resilient dynamism," a push for more creative ways to strengthen the economic safety net of the global economy to "resist sudden emergencies like the euro zone debt crisis."

But while nearly 1,000 business leaders, Hollywood actors, and heads of state conspire on what to do, the resiliency of the Greeks, arguably hardest hit by the crisis in Europe, has pushed things in a different direction.

There's a fear that the Greeks are contributing to deforestation of their land, as the scrounge for anything they can burn to keep warm this winter – because who can afford heat?

Meanwhile, the United Nation's International Labor Organization reported Monday that Greece's youth unemployment rate has surpassed 50 percent and since 20 percent of Greeks were considered living under the poverty line in 2010, that number has since risen. Eurostat puts it at 30 percent.

Some believe Germany, France and the rest have no right to tell Greece how to control its purse strings, as the measures suggested and enacted by the wealthier EU countries at conferences like Davos doesn't seem to be working and a humanitarian crisis is still unfolding.

At protests last year, Merkel was depicted as a Nazi, as Greeks see the economic measures as a new form of occupation, not unlike the German invasion of Greece in 1941. And considering the income inequality between Greece and Germany (their Gini indexes are 37.6 and 34, respectively), the anger and frustration is not surprising.

Many Greeks still want to excise themselves from the rest of Europe and they have taken the situation into their own hands.

More from GlobalPost: Greece trapped in the middle of IMF, EU dispute, no end in sight

The Guardian reported this week that the Euro had been discarded in some communities in favor of an alternative currency called the "Tem," and old-fashioned anarchistic bartering. Bars, boutiques, and even babysitters are using the Tem/barter system.

"It's all about exchange and solidarity, helping one another out in these very hard times," said Angeliki Ioanitou, a farmer in the city of Volos, to the Guardian. "You could say a lot of us have dreams of a utopia without the euro."

A bomb was detonated at a shopping mall last week, reported the LA Times, part of a two-week surge of politically-themed violence by terrorists opposed to the Eurozone and capitalism.

Crime experts said the attack "bore the hallmarks of a new generation of revolution-minded anarchists, nihilists and middle-class troublemakers."

"That they chose to target a bank [on Sunday] or a political party a week prior, is neither new or surprising given their long-standing anti-capitalist views," said Mary Bossi, a leading Greek terrorism expert and professor at Pireaus University, to the LA Times.

Not to mention, without heat, Athens is covered in a cloud of smoke, according to NPR, as people are burning everything from firewood to furniture, and some opportunistic entrepreneurs are cutting down trees in Greece's already bare forests to sell the wood to their neighbors.

"People are destroying everything in a desperate effort to survive, or they're using the crisis to make a profit," environmentalist Grigoris Gourdomichalis said to NPR, fearing what the effects of deforestation could be.

Dutch prime minister Mark Rutte, questioned at Davos about Greece yesterday, said it should be possible for a country to leave the euro zone, sparking controversy.

Rutte was on a panel and was asked if he was certain that countries wouldn't be leaving after all the planning last year to keep Greece afloat by what Reuters called "draconian austerity measures."

"I believe our aim should be to have the whole euro zone intact," he said, reported Reuters. "At same time, you can never predict whether some country may want to leave the euro zone. I think that should be possible."

Considering a new report that once again predicted negative growth for 2013, and that a member of European Central Bank board said this week he didn't think the euro would last, combined with an increasingly popular sentiment that Greece could be the first to leave, it seems like the situation may be out of the hands of those at Davos.

For more of GlobalPost's reporting on income inequality in Europe and all over the world, check out our Special Report "The Great Divide: Global Income Inequality and its Cost."