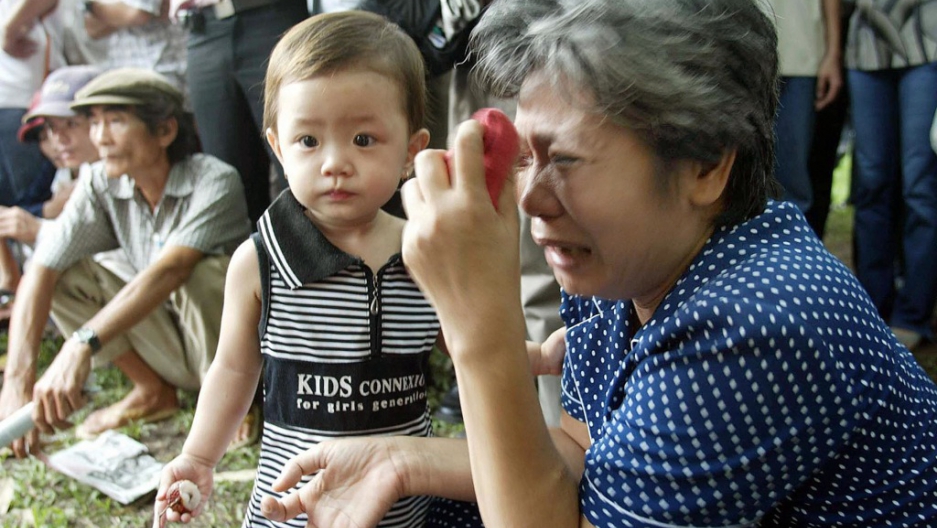 Nguyen Thi Ha, aunt of Ho Thanh Tung, one of six defendants sentenced to death, sits crying next to her grand-son outside Ho Chi Minh-City's Court where the judge announced the sentences of the country's biggest ever corruption scandal, June 5, 2003.
Credit: HOANG DINH NAM
Share

Like many of its Communist brethren, Vietnam enforces the death penalty. The European Union abhors it.

This is a dilemma for Hanoi, which wants to use lethal injection drugs on its 500-plus prisoners on death row. Germany is a major supplier of sodium thiopental, a standard execution drug that's also used to induce anesthesia. But modern European mores dictate that enabling capital punishment is unethical and that Vietnam is unfit to receive the drug.

So, as the BBC and many other outlets are reporting, Vietnam now intends to create "domestic poisons" that will end the lives of its death row inmates.

Vietnam doesn't profess to care much about its death row inmates' condition. There's a reason Vietnam is suddenly seeking lethal drugs: last year, the government opted to quit using firing squads because it worried about the psychological toll on the shooters, not the anguish of the executed.

Those bound for execution — many of them drug traffickers — are reviled as "the seeders of white death to society," according to this excellent series on Vietnam's firing squads by the outlet Tuoi Tre. As Tuoi Tre uncovered, the firing squad was typically treated to an "alcohol-fueled party so that they could air their grievances and relieve their minds before going home."

Lethal injections are certainly easier on those tasked with carrying out state executions. But whether Vietnam's homegrown death cocktail will prove as painless to the executed as sodium thiopental — or offer a more painful death experience — remains to be seen. If it's the latter, the EU ban may inadvertently play a role in making the capital punishment system it disdains just a touch less humane.