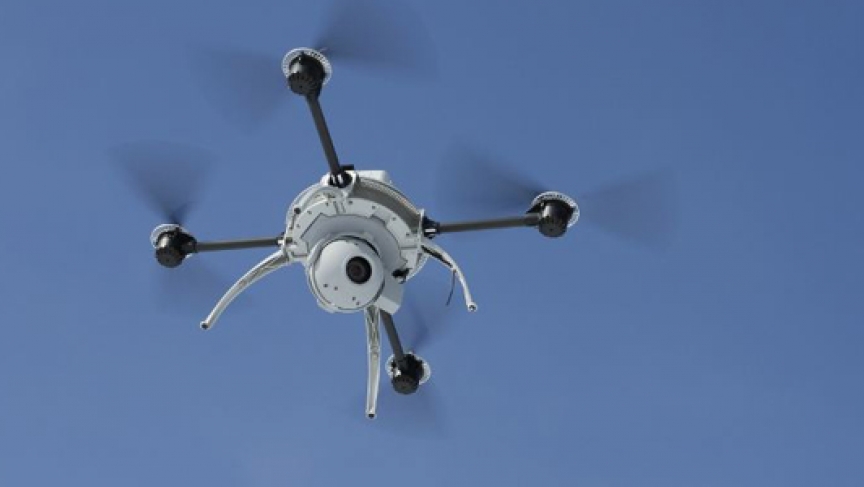 The "Scout" is an unmanned aerial system, equipped with a camera, designed by Aeryon Labs in Ontario, Canada. It weighs three pounds and can stay airborne for 25 minutes. (Photo courtesy of Aeryon Labs.)

The civil applications for unmanned aircraft are numerous, from spreading pesticide on fields, to delivering medical supplies in remote areas, to monitoring hundreds of miles of oil pipelines for leaks.

The University of North Dakota recognizes this huge potential — the school now offers an undergraduate major in unmanned aircraft systems operations. Most soon-to-be graduates will end up in jobs that support the military. But program head Ben Trapnell said civilian uses will eventually far outpace those for defense.

“Some of the big things, agricultural uses, we can get imagery to farmers a lot faster than having to wait for satellites to do the same thing,” he said.

For instance, an unmanned plane could fly over a field and send back pictures to show where pests are located or where crops are moist.

“There’s the possibility of flying organs from one place to another to get them there faster for transplants,” said Trapnell, who has a list of about 90 potential civilian applications.

Today when we hear about unmanned aircraft, we’re accustomed to imagining a big military drone, basically a plane without a pilot. These fighter drones have to be big to carry missiles. But unmanned aircraft for civilian purposes can be built much smaller.

Jeff Johnson gives a tour of the labs at Appareo Systems, a company that makes avionics equipment in Fargo, N.D.

“That little black box you’re seeing there is the device we made for the office of naval research,” he said pointing out a device that detects obstacles and keeps an unmanned aircraft from crashing into a building or other plane.

The device is a cube small enough to hold in the palm of your hand.

“As small as that is, it’s too big,” said Johnson.

The cube needs to be smaller because unmanned planes of the future will be really, really small. Picture a model airplane.

Johnson said making one small enough to be portable could be helpful, for instance, in fighting a forest fire.

“One of the applications we’ve been asked about is to have a person being able to carry a UAV on their back that they assemble and can send through a smoke plume to see what’s on the other side,” he said.

These devices may be small, but they still need oversight when they’re in the air. In the United States, the Federal Aviation Administration is in charge of that and is proceeding cautiously.

For now, the FAA has banned most domestic uses of UAV’s while it figures out the risks these devices pose and draws up regulations. In the meantime, the agency has authorized limited use of UAV’s for important missions deemed “in the public interest.”

That includes things like disaster relief and law enforcement. Still, operations are prohibited over densely-populated areas.

To the north, Canada is moving ahead more quickly. You can get a permit to fly a UAV in a matter of weeks through the Transport Canada agency. But even with that license, which is handled on a case-by-case basis, you can’t fly a UAV higher than 400 feet.

Once certified, pilots can purchase a UAV from a company like Aeryon Labs in Waterloo, Ontario. They sell a device called “The Scout.”

“The system comes out of a small case or backpack, about the size of carry-on luggage. So the system can be deployed anywhere and carried by a single user,” said company Vice President Ian McDonald.

The Scout is like a helicopter, but uses four propellers to stay airborne. While in the sky, cameras take video or photos.

McDonald said in the past three years, his company has sold the Scout to military and commercial customers on every continent, except Antarctica.

“A customer in South Korea used the system as part of security planning and response for the 2012 nuclear summit,” McDonald said.

McDonald said there are a few key reasons to use the Scout: Namely, it’s cheaper and safer than hiring a pilot to fly a plane or helicopter. And it flies lower to capture higher resolution images.

Add it all up, it’s big business. Already, worldwide sales for unmanned aerial vehicles top $7 billion, according to industry estimates from the Teal Group.

And that figure could more than double within a decade, especially as UAV’s start to be used for more civil applications.