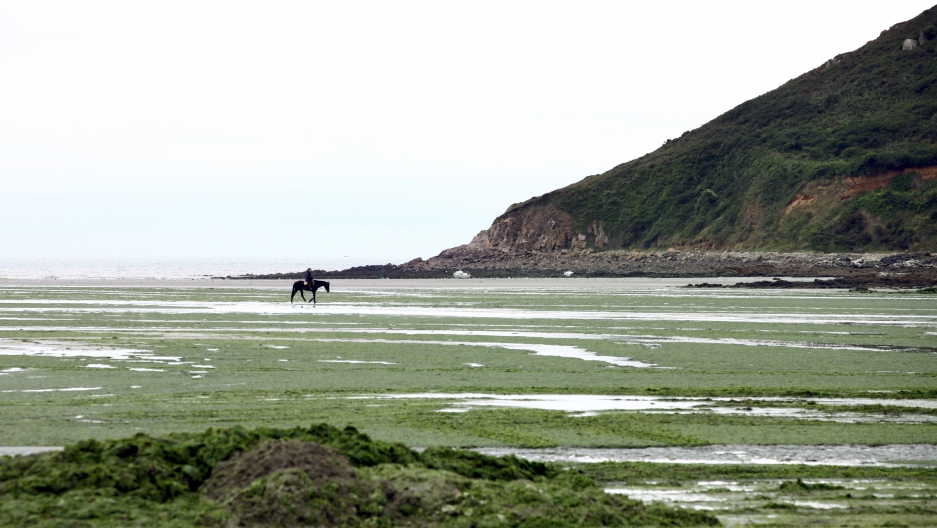 Could sprinkling mineral dust on the world's oceans actually help slow down climate-change? New research into geo-engineering indicates that it might be possible to remove tons of carbon dioxide from the atmosphere with this technique — but the potential environmental side-effects are giving scientists pause .

The researchers, led by Peter Köhler, of the Alfred Wegener Institute for Polar and Marine Research in Germany, found that distributing olivine — one of the most common minerals on the planet — on the world's oceans would help make sea water better able to absorb atmospheric carbon dioxide, thereby slowing down global warming.

Further, the mineral technique might also help to staunch the spread of ocean acidification, which is currently wrecking havoc on coral and other delicate marine ecosystems.

Why aren't we doing this today? For one thing, such a project would require an absolutely enormous mining effort, as large as the current coral industry — which would create harmful emissions, points out the Guardian.

Logistically-speaking, there would also be a lot of ships involved: according to the original paper, to carry out such a project would require in the range of a 100 bulk tankers and shipping vessels to be used to distribute the minerals "ten times a year," requiring the frequent usage of ships needed for international business purposes.

Further, the ocean-wide changes caused by the distribution of minerals could affect the species composition of plankton populations, which form a key component of essentially every marine ecosystem.

"Taking all our conclusions together – mainly the energy costs of the processing line and the projected potential impact on marine biology – we assess this [geo-engineering] approach as rather inefficient," lead researcher Köhler told Environmental Research Web on the scheme, indicating that this plan may remain an interesting thought experiment.

Similar geo-engineering techniques call for seeding the ocean with iron to stimulate the growth of algae, which capture carbon dioxide using photosynthesis — although it's unknown what might happen to ocean species composition if such a technique was used on a large scale.

Geo-engineering, the science of using human technology to counteract climate change on an epic, planetary scale, is a technology in its infancy, warned the British Department of Energy and Climate Change, and little regulation or oversight of techniques that could literally change the face of the earth currently exist — a reality that is somewhat worrying.

The US Government echoed the UK's concerns in a recent report on bio-engineering, noting that "At the international level, there is no international agreement or organization governing the full spectrum of possible geo-engineering activities."