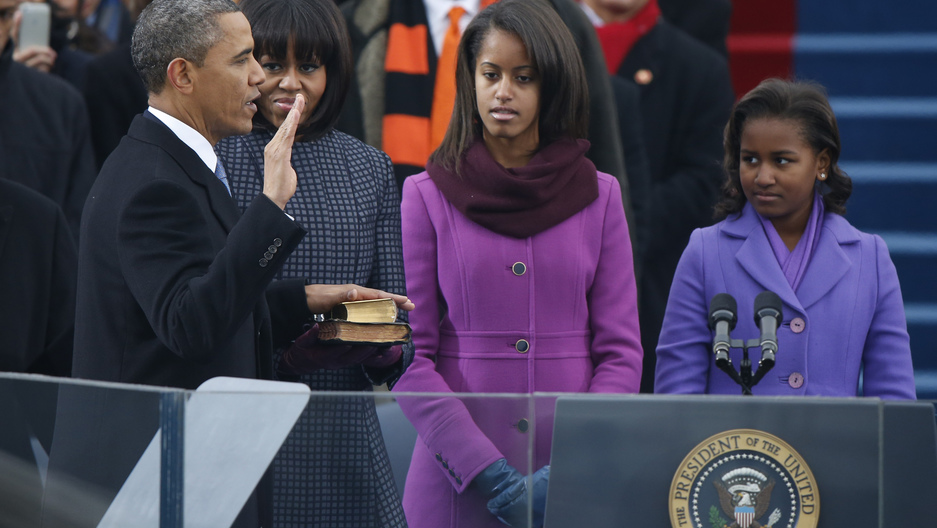 U.S. President Barack Obama takes the oath of office as first lady Michelle Obama (2nd from L) and daughters Malia and Sasha (R) look on during the swearing-in ceremonies on the West Front of the U.S. Capitol in Washington, January 21, 2013. REUTERS/Jason Reed (UNITED STATES - Tags: POLITICS)

President Obama's second inauguration has been a subdued event, says Gary Younge, a columnist for the British newspaper The Guardian. Younge tells anchor Marco Werman why he thinks the notion that America might elect a black president now seems like little more than a banal fact of life.

Younge, who writes for a primarily British audience, says expectations abroad for a second Obama administration are greatly reduced.

"There was this unfounded expectation that Obama's election would signal not just a radical departure — and I think it has been a significant departure from the Bush era — but a radical reconstruction, a reformation of American foreign policy and that hasn't happened," he says. Younge adds that discussions of the Obama regime abroad are not likely to prompt mention of civil rights or efforts to combat racism, but instead spark discussion of "drones, Pakistan and Guantanamo Bay …These are the touchstones abroad," says Younge.