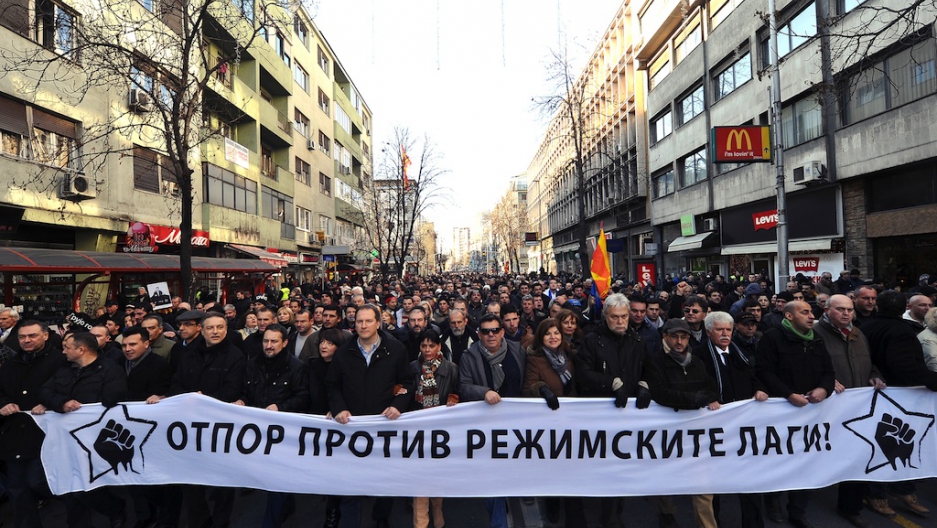 Macedonian opposition supporters carry on January 12, 2013 a banner, reading: 'Resistance Against the Lies of the Regime,' during a protest called the 'Truth March' in Skopje. Macedonia on January 11 called local elections for March 24 in a tense political climate that has reigned since opposition boycotted parliament last month. Macedonia has been in a deep political crisis since December 24, when 17 people, including 11 policemen and two deputies, were slightly injured in scuffles over the 2013 budget.
Credit: Robert Atanasovski
Share

SKOPJE, Macedonia — On Jan. 12, thousands of citizens in the Republic of Macedonia marched through the streets here to express shared outrage over their government’s use of force against journalists and opposition members of parliament on Christmas Eve.

The forcible suspension of press freedom and the physical violation of parliamentary immunity were the final acts in an extended political drama to pass the government’s controversial budget proposal for 2013.

After the majority right-wing VMRO-DPMNE party cut off committee deliberations, and the speaker called for an up-or-down vote, opposition MPs blocked further progress by occupying the speaker’s platform.

Under orders from government ministers, and to the applause of VMRO-DPMNE MPs, burly security personnel first cleared journalists from the viewing gallery, then swept into the chamber to break the blockade. Despite the government’s exclusion of the media, a courageous MP used her cellphone to document the entire episode, as opposition MPs were dragged or carried from the chamber. The incident also sparked scuffles between police and opposition demonstrators outside Parliament.

VMRO-DPMNE’s PR team and pro-government national media were quick to blame the opposition entirely, accusing them of provoking tensions and even attempting a coup d’état. Such calculated distortion is familiar; since 2007, Macedonia has slid from 36th to 94th in international rankings for press freedom, and Reporters Without Borders last year anticipated a “never-ending decline.”

This time, though, citizens have had enough. After a week of countrywide nightly protests, Skopje hosted Saturday’s mass demonstration, and a river of humanity flowed through the city. Again, pro-government media swiftly concocted a tale of threatening, thuggish demonstrators committed to violence and bent on confrontation.

My own experiences that day — confirming my impressions from twenty years of research in the country — affirmed that, despite the best efforts of government propaganda, deep wells of civility and mutuality endure.

Before the march started, police politely guided demonstrators to the start point, and could be witnessed chatting with participants. Outside parliament, a self-styled VMRO-DPMNE sympathizer walked with us for a while, openly sharing worries over rising pharmacy prices and misleading government promises.

After the crowds dispersed and we headed away in a cramped taxi, the driver, another VMRO-DPMNE supporter, listed his criticisms of the current regime, including its financial policy, expensive and relentless self-marketing, and its narrow ethnic chauvinism.

He even gave us a book as a gift: a bilingual, anti-nationalist volume authored by an “initiative of comrades” from Greece and the Republic of Macedonia, which criticizes the historical illiteracy and neurotic heritage politics of “antiquation” epitomized in expensive rival statues of Alexander the Great in Skopje and Thessaloniki.

The gift demonstrated that even VMRO-DPMNE supporters are sick of their party’s poisonous brew of bombast, faux patriotism and provocation.

Such banal, trivial exchanges undoubtedly occurred all over Skopje that day. They signal that civility can take root in city streets and that despite top-down fear mongering, citizen protest does not jeopardize democracy, but may be its last, best hope.

The challenges facing disenfranchised Macedonians today are not new, nor is the non-violent protest I witnessed in the streets of Skopje.

The dynamics are eloquently captured by Dr. Martin Luther King, Jr. in his 1963 Letter from The Birmingham Jail, where he lays out the principles behind his campaign of direct, non-violent action, explains the enduring injustice of ongoing segregation and responds to critics who judged civil disobedience as premature and unnecessarily provocative.

The regime recognizes the danger of citizen mobilization, and has escalated its efforts to divide citizens against each other. Foreign diplomats with concerns over stability have already urged opposition parties, currently boycotting parliament in solidarity, to return and participate in the regime-controlled institutions of representative democracy.

For those with the will to utter them and the sense to hear them, King’s words pose a straightforward challenge to anyone who recognizes that the shocking images of Dec. 24 laid bare a party-dominated government’s utter contempt for free media and parliament, two key institutions of democracy.

Keith Brown is professor of international studies at the Watson Institute for International Studies at Brown University, and is currently a Fulbright Fellow in the Republic of Macedonia.