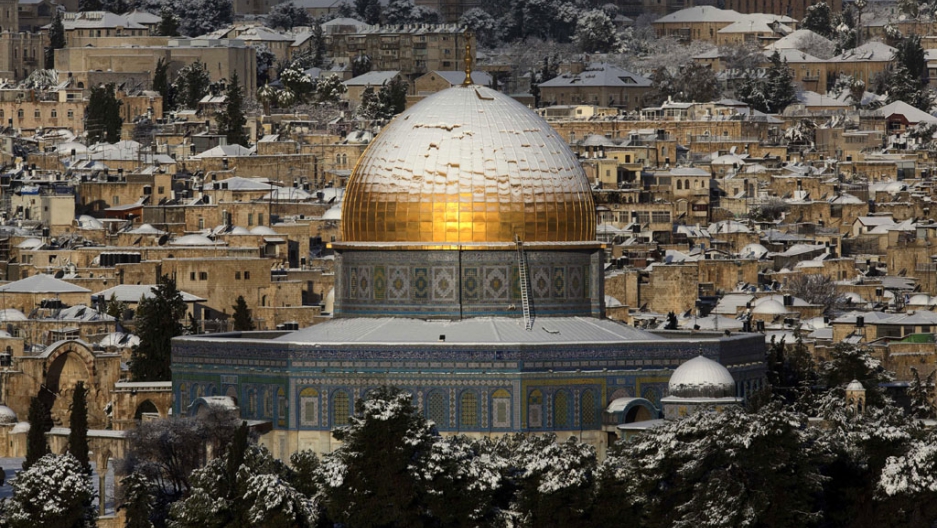 Snow covers the Dome of the Rock at the Al-Aqsa mosque compound in the old city of Jerusalem after a winter storm on January 10, 2013.
Credit: MENAHEM KAHANA
Share

Jeremy Gimpel, an American-born candidate running in next week’s Israeli elections, has inflamed the race after video surfaced of him asking what would happen if two mosques on Jerusalem’s Dome of the Rock were blown up and replaced.

Gimpel, a candidate for the right-wing religious party Habayit Hayeudi, made the comments during a speech to a Fellowship Church gathering in Winter Springs, Florida, on Nov. 13, 2011.

His speech caught the attention of Israeli media, with the popular Channel 2 television broadcasting parts of it Friday, Haaretz reported.

“Imagine if the Golden Dome – I’m being recorded so I can’t say ‘blown up’ – but let’s say the Dome was blown up, right? And we laid the cornerstone of the Temple in Jerusalem,” he told the crowd in the video, now available on YouTube.

Dome of the Rock is a sacred Muslim shrine, and the third-most holy site for Islam. Gimpel was born in Atlanta and moved to Israel as a boy.

Israelis vote on Jan. 22 with Prime Minister Benjamin Netanyahu’s newly formed Likud-Beiteinu party favored to win, according to The Jewish Chronicle. The party has also rapidly lost support in the final weeks of campaigning.

There are 34 parties on the ballot. Habayit Hayeudi is led by 40-year-old ex-soldier turned software tycoon Naftali Bennett, himself the son of American immigrants to Israel.

“We are in an area no one foresaw,” Tarnopolsky writes from Jerusalem. “People are tired of Netanyahu and are searching for alternatives. So individuals like the No. 14 guy on what was until recently a totally marginal party list are suddenly thrust into the limelight, and the warts show.”

This isn’t surprising, she said, because the worst gaffer in the party is Bennett himself.

Bennett is fresh off a TV interview two weeks ago in which he stumbled over a question about evacuating settlements by suggesting he’d refuse military orders.

“This is why he found himself backtracking for two weeks, and recently announced that illegal settlements on private Palestinian land should be evacuated,” Tarnopolsky said. “Habayit Hayehudi is for now an inchoate, maybe incoherent group of people, not a serious political party.”

The next hot-button issue will come quickly, with several appeals on Sunday before the Supreme Court and National Elections Committee to have Gimpel declared unsuitable to run.

Former foreign minister, and current candidate, Tsipi Livni has called for Gimpel's removal on the grounds of inciting violence.

Gimpel has defended himself by saying the comments broadcast this weekend were taken out of context.

He said he was lecturing the group about the book of Ezra, and tried to make it more impactful for the audience.

“I made a few jokes and you clearly hear the audience laughing,” he told The Jerusalem Post. “This is a cheap political attack and I would urge anyone to watch the video in its entirety and decide for yourselves.”

To reinforce their point, critics found another video that featured Gimpel saying the Dome of the Rock "doesn't really belong there."