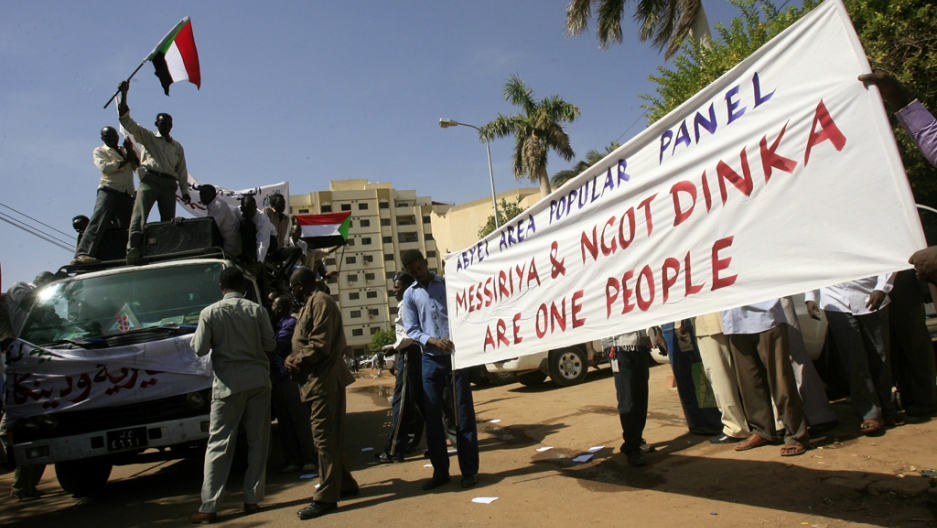 Some 100 protesters from the nomadic Arab Messiriya tribe demonstrate in Khartoum, Sudan, on Nov. 28, 2012. The 20th African Union (AU) Summit is set to gather in Addis Ababa, Ethiopia, on Jan. 21, 2013, to discuss measures to leads the Sudans toward peace — including ways to ensure the final status of the hotly-contested region of Abyei.
Credit: Ashraf Shazly
Share

ABYEI, Sudan — In December I traveled to Abyei, a disputed resource-rich region straddling the ill-defined border between Sudan and South Sudan. For more than four decades, Abyei has been a flashpoint of conflict between the two countries and as long as its final status remains unresolved, violent outbursts will devastate local communities and the threat of war will loom large over the Sudans.

As regional and international leaders descend on Addis Ababa, Ethiopia, next week for the 20th annual African Union (AU) Summit, they have a critical opportunity to prevent further violence on the ground and lead the Sudans toward peace by ensuring that the final status of Abyei is resolved once and for all.

Since the 1970s, there have been multiple internationally supported and observed agreements to determine the final status of Abyei. Failure to enforce the agreements has been followed by bloody civil wars that have taken the lives and forced the displacement of hundreds of thousands of people. Negotiations over a referendum to determine whether the area is part of Sudan or South Sudan is hence one of the most controversial outstanding issues remaining after South Sudan’s secession from Sudan.

A well thought out political proposal exists for determining Abyei’s status, but more pressure is needed to ensure that the two countries make use of it in a timely manner. In September 2012, the AU High-Level Implementation Panel (AUHIP) tabled an Abyei proposal that provides mechanisms for conducting a referendum.

The proposal would also protect the long-term migratory, civic, political and economic rights of the two communities with the greatest stake in Abyei — the southern-aligned Ngok Dinka, who have historically inhabited Abyei, and the northern-identifying nomadic Messeriya, who have traditionally traversed the area with their cattle in search of water and pasture.

The proposal provides a strong, comprehensive basis for further negotiations on the referendum and has been supported by Norway, the United Kingdom and the United States. Despite these endorsements, more must be done to pressure the governments of Sudan and South Sudan to make progress on negotiations over its contents.

Consequently, AU leaders face a critical choice next week: address the Abyei issue head on — holding the governments of Sudan and South Sudan responsible for quick progress on negotiations over a referendum and ultimately toward a more peaceful coexistence — or risk the outbreak, yet again, of brutal violence in Abyei.

The stakes this year are incredibly high. For the first time since May 2011 — when conflict violently displaced more than 100,000 Ngok Dinka and left Abyei almost entirely empty — large numbers of Ngok Dinka and Misseriya have returned to the area. As of my December visit to Abyei, the International Organization for Migration estimated that more than 16,000 Ngok Dinka have returned from displacement, while the UN Interim Security Force for Abyei estimated that 9,000 Misseriya with 350,000 cattle have already migrated into the territory.

I spoke with people in the Ngok Dinka and Misseriya communities about their concerns over this year’s migration season and a possible referendum. It was clear that high-level political wrangling and inaction over the territory’s final status have deepened fears and paranoia among local communities. Surprisingly, neither Ngok Dinka nor Misseriya communities seemed aware of the specific contents of the AUHIP’s proposal or the rights and protections it affords them.

Misinformation or a lack of information among local communities has allowed the governments of both Sudans to fuel angst and pit the two communities against each other. The longer Abyei’s status remains unresolved, the higher the tensions among local populations and the two states become.

During next week’s AU Summit, three critical steps must be taken to lay the path for resolving the final status of Abyei.

First, the African Union Peace and Security Council (AUPSC) and other influential international actors must publicly recognize the AUHIP’s proposal as the best available mechanism for resolving Abyei’s final status. Statements of support from Ethiopia, South Africa, Qatar, Egypt and China, among others, are urgently needed to increase pressure on the two countries to make use the proposal as a basis for further negotiations.

Secondly, a new, inviolable deadline for progress on negotiations over Abyei should be set by the AUPSC and a commitment made to accept the AUHIP’s proposal as final and binding should the deadline pass without sufficient progress.

And lastly, international actors working in Abyei should lead a civic education campaign with the Misseriya, Ngok Dinka and other local and international peace actors on the contents of the AUHIP Proposal. This can help manage both governments' attempts to manipulate and misinform communities on the ground, in addition to serving as a way to mitigate violence this migration season.

Renata Rendón is the policy and advocacy director at the Enough Project, an organization dedicated to ending genocide and crimes against humanity.