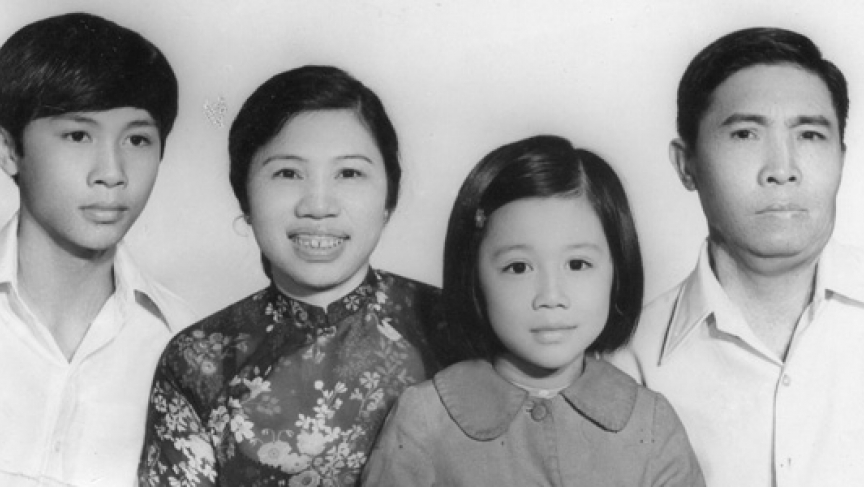 In Vietnam, traditions are often passed down from generation to generation through song and dance — and for some Vietnamese Americans, through stories. In California, a group of college students are taking on oral storytelling to draw out how Vietnamese immigrants, many of whom arrived here after the Vietnam War, remember life back home.

The storytelling project is being spearheaded at the University of California, Irvine, by a course called the Vietnamese American Experience. Recently, Professor Thuy Vo Dang held class inside a temporary trailer on the overcrowded campus. It's a small, warm room. It makes you drowsy. Students nodded off; others did not do their homework.

Professor Dang discussed a short story she had assigned her students about a young Vietnamese refugee in America and his efforts to fit in. Dang asked questions, but the students kept quiet, maybe because the story seemed foreign to many of them. They were all born in the United States.

But Dang has figured out a way to wake her class up. Getting students — many in the class are of Vietnamese descent — to turn to their own relatives for their stories.

Sophomore Vince Vu was born in the States, but his parents came as refugees in 1975, during the first wave of Vietnamese migration after the Vietnam War and the fall of Saigon. Vu always wanted to interview his dad, and this class, he said, is the push to do just that.

"At first it was easy, because my parents are older and I think they wanted to get their story out somehow," Vu said. "The hard part was trying to get them to remember certain things like racial segregation, stuff like that, specific stories."

Vu struggled to squeeze details from his dad, and he isn't the only one here trying to get older generations to open up, even if they've been living in the US for decades. Even Professor Dang found it tough to get her dad to speak candidly about his life, especially during wartime Vietnam.

"When it comes to private life and home space, that's where we see the silences, and the ghostly haunting of the Vietnam War," Dang said.

Recent studies confirm that. Researchers at UC Irvine say that Vietnamese who came to the United States as political refugees suffer from higher rates of mental health problems than white Americans. Near the university, there is an area known as Little Saigon, Vietnamese-Americans are successful in business and education, but depression, anxiety, and a fear to get medical help can also run rampant among the older generations.

"If you think about refugee trauma and refugee experience, people have left everything behind and have gone through really terrifying experiences in order to build a new life, a better life," Dang said. "And what that actually means is that the new home space that they create is really incompatible for these sorts of stories to emerge."

Dang added that young Vietnamese-Americans want to hear these stories and, after they stop clamming up, older Vietnamese are eager to share their memories.

Earlier this spring, student Andrew Lam interviewed 40-year-old Christopher Phan, a local city council member; a lawyer, and a former Navy officer. Phan said that he arrived to the United States when he was "maybe 9 or 10 years old." 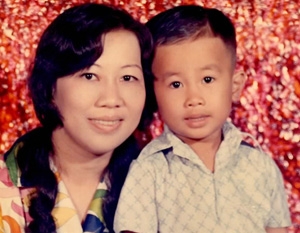 Christopher Phan and his mother Thrinh.

Phan remembered his first moments in the United States. It was deep into winter. "We had our first snowstorm and it was just phenomenal," he said. "I had never seen snow in my entire life. It was awesome."

Following oral history protocol, Lam took field notes. "He smiled for a majority of our conversation," Lam later wrote. He added: "And rather than an interview, it seemed more like a conversation amongst friends."

When Lam asked Phan what he missed from Vietnam, Phan thought of the durian fruit and said, "I don't know if you're familiar, Andrew, but durian is either very aromatic to some, and very pungent to others. But I'm a huge fan of that and I can eat five, six perhaps, if you would let me."

In Phan's oral history, he also talks about how he used to collect crickets as a young child in Vietnam, and how he served as a Navy attorney in Fallujah, Iraq. He also talks about the Vietnam War and how his family's political involvement led to their persecution and the confiscation of their property, and what it means to him to be Vietnamese-American.

The story archive is still growing. So far, it contains oral histories from Nguyen Thi Hanh Nhon, a great-grandmother in her 90s who trained female soldiers; Ha Bich Van, the head chef of a successful Vietnamese-French fusion restaurant in California; and Thanh Ngoc Nguyen, who escaped Vietnam by boat in 1982 and passed through refugee camps in Malaysia and the Philippines before arriving in the US.

At the University of California, Irvine, students are engaged in an oral history project to collect the stories of Vietnamese immigrants, many of whom arrived here after the Vietnam War. We include three of the students' oral history recordings here: