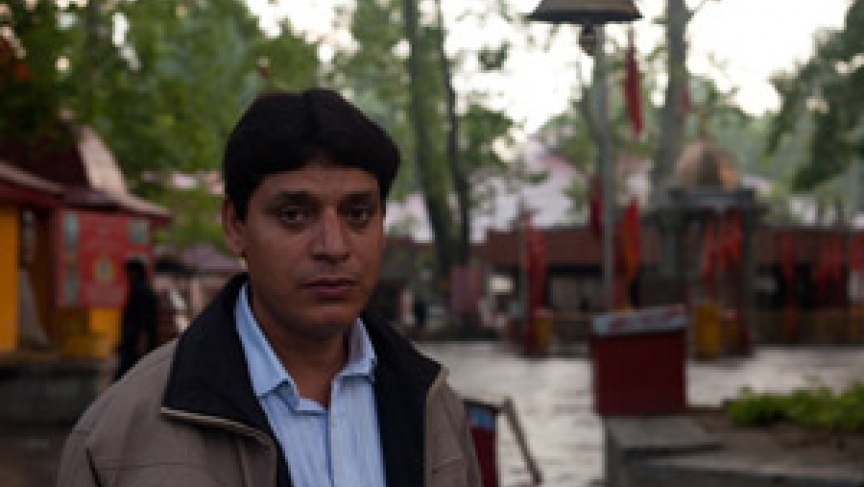 Anil Saproo, a Hindu Pandit who returned to his ancestral homeland in the Kashmir Valley. (Photo: Abid Bhat)

Share
Mughal emperors called the Kashmir Valley a "paradise on earth." But the northern, India-administered region sits next to Pakistan. And it has long been contested by those both countries. That has lead to a lot of strife. On both sides. For centuries, upper-caste Hindus, known as Kashmiri Pandits, lived alongside the region's majority Muslim community. They shared traditions of food and poetry, even certain holy sites. They visited each others' homes, celebrated each others' marriages. But in 1989 Islamic militants began an insurgency against the Indian government. The Pandits were easy targets. Anti-Hindu rhetoric was broadcast at weekly prayers, dozens were murdered. Virtually overnight, some 400,000 Pandits fled, mainly to the Hindu-dominated town of Jammu, a precarious seven-hour drive away. In most cases they simply locked their houses and left, imagining they'd return in a few weeks or months. But years passed and the violence never let up. Early government efforts to bring the Pandits back were met with often-violent resistance. But now, the Indian government is trying again. In the last three years, attacks in Kashmir have been infrequent; tourism is booming. Chief Minister Omar Abdullah of the state of Jammu and Kashmir said that this is the time to put things right for the Pandits. "They left because their sense of security was taken away from them, Abdullah said. "I believe they will only really come back when that sense of security is restored—and that's what we're aiming to do." In 2008, Indian Prime Minister Manmohan Singh, with the Kashmiri administration, announced that 6,000 coveted government jobs in the valley would be made available to young Pandit migrants. Since 2010, nearly 1,500 of those posts have been filled by men and women who were born here, but who have only vague memories of this place. Among them is Anil Saproo, a Pandit in his late 20s. "Every Kashmiri Pandit is missing our motherland. Every Kashmiri Pandit," he said. Saproo was 6 when his family left for the city of Jammu. Like many returnees, he has mixed emotions about being back in Kashmir. Saproo's father was shot and killed by Islamic militants. "I will not forget that time. Time and day. This was the saddest day of my life. And my mother's, too." Saproo has been given a government teaching job at a small village school on the outskirts of Srinagar. He is the school's only Pandit instructor; all the students are Muslim. The school stands less than 10 miles from where Saproo's father was gunned down. Despite painful memories and a fear of renewed violence, young Pandits like Saproo are eager to take advantage of the prime minister's package. Most held private sector jobs before they returned to the valley. But in Indian Kashmir, government work brings an almost unheard of stability–fixed hours, generous holidays, retirement benefits and job security. These advantages are particularly meaningful to the members of a community that lost everything. But it isn't easy to be back. The Kashmiri government puts the migrants up in dormitories, sometimes assigning half a dozen people to one apartment. The nearby houses where they were born sit vacant and decayed. And almost all the returnees have left their families behind in Jammu, a "real city," with quality schools and an existent nightlife. Still, Saproo and the others feel a profound connection to Kashmir, to the lakes and snowy mountains of their childhoods. "We feel both are our homes," he said. "We are born here; it is our motherland. We are growing there; that is our motherland. Both places are good and both places are good for me." Saproo was born in a five-story house surrounded by orchards. He lives now in a single room in a Pandit temple complex. But he's grateful even for that–to be among Kashmiri Hindus, in a place of prayer. Evenings at 7:30 they gather to sing to the divine, a growing number of returnees bound in their religion, their nostalgia and their ambivalence.