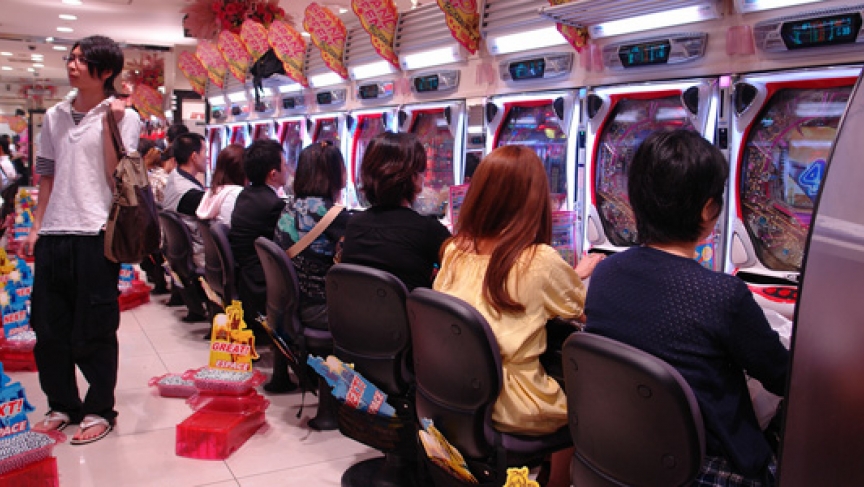 American gambling companies have been pushing for Japan to legalize casinos for years. And when you step into the Zeus pachinko parlor in Kitakyushu, it's evident why. The country has a massive gambling habit. But then again, they call it "gaming" not "gambling."

Even at noon on Sunday in this small industrial city, players pack the narrow aisles of the parlor. Smoke carpets the room, and the sound is deafening. Lined up in long dizzying rows, the jangling machines look like the mutant love children of old school pinball games and futuristic one-armed-bandits, each one pimped out with powerful speakers, intense video montages, and a barrage of flashing lights. The cocktail of sound, smoke, and light shake out to a full-on assault of the senses.

The players sit transfixed–one hand resting on the machine's dial, another on a joystick–their eyes glued to individual video screens and cigarettes dangling from their lips. Most of them look like they retired more than a decade ago, but not Takahara Daiki.

Daiki is 20 years old and works as a line cook in a local restaurant. He explains the game to me, and it's pretty simple–in theory. You buy a bunch of small silver balls and then use a dial to control how fast they shoot through a course of pegs. Get them in the right holes, win more balls. "The game is interesting," he says, "and I play half for fun and half to make money." Although, when it comes down to it, he's a little evasive about his actual net gain or loss.

Daiki thinks he knows how to beat the machine. He always looks for a "hot" game, one that's been paying out a lot. You can read the number of payouts over the past few days above each console. It's all part of a strategy that makes players feel like the game is skill-based, when in reality, the machines have all been rigged in the parlor's favor. It's just like Western slots. The house always wins.

The pachinko industry constitutes Japan's largest leisure activity. The sector employs over 300,000 people and brings in about 225 billion dollars a year. That's more than two times the revenue from all legal US gambling operations–in other words, about the GDP of a country like Israel.

The parlors are everywhere. You can see the flash of their neon signs from the train as you pull into stations across the country. Turn on the TV and you'll catch commercials for new parlors and machines, some like this bizarre series done by Nicholas Cage for Sankyo, one of the country's largest pachinko manufacturers.

Daiki says he came to Zeus today because it has a new game, one the parlor has advertised as easy to win. The game exemplifies recent changes in the industry to snare a broader demographic, particularly retired women. It's cheaper to play than standard pachinko and has a more intense video game component. This one has a narrative based on the popular anime series, Evangelion.

Naoko Takiguchi is a sociology professor at Otani university in Kyoto. She runs gambling addiction rehab programs, and she says the video game aspect can heighten pachinko addiction–a condition she claims is already widespread in Japan. "The government does not acknowledge this is a big problem," she says.

Japan has recently made some regulatory changes to deal with addiction–most notably requiring the payout system to be less "exciting." But Takiguchi says since pachinko is still considered a game — not gambling — the highly addictive nature escapes scrutiny. And she says in Japan, addiction is already a topic that people don't want to admit or even talk about. "It takes a long time for people to seek help," she says, "it's the shame."

Pachinko was first introduced to Japan the 1920s, but it really took off after World War II when the country's largest minority group started opening parlors. Sung-Yoon Lee is a professor of Korean studies at the Fletcher School at Tufts University. He says Koreans flocked to pachinko because they faced citizenship issues and discrimination that barred them from standard businesses.

The pachinko industry has slipped some since it peaked in the 1990s. Back then the government did little to regulate parlors, and the industry brought in about 300 billion dollars a year. But after about a decade of decline, the industry has leveled out, and there's even speculation now of a steady rise. Parlors actually out-performed Las Vegas casinos back when the financial crisis hit in 2007.

Pachinko was first introduced to Japan the 1920s, but it really took off after World War II when the country's largest minority group started opening parlors. Sung-Yoon Lee is an assistant professor of Korean studies at the Fletcher School at Tufts University. He says Koreans flocked to pachinko because they faced citizenship issues and discrimination that barred them from mainstream businesses. "This pachinko industry would have afforded an easier avenue to a livelihood," he says, "it's a cash industry of course. It's shady business."

Lee says most pachinko parlors are still owned by Koreans living in Japan. And about thirty percent of those owners have ties to North Korea. He says at the peak of the industry in the nineties those owners were sending several hundred million dollars a year — in cash — to Pyongyang. "For a poor, small economy like North Korea, that isn't an insignificant sum," he says, "in fact, that would equal about North Korea's annual export earnings for that year. So that's a lot of money back then."

Japan has since cracked down on those money transfers. But Lee says North Korean-affiliated pachinko magnates are still raking in cash. And they aren't the only ones. For years the Yakuza, Japan's famed mafia, played a crucial role in running and regulating the industry. Now that task has been taken over by the national police, and there have been reports of corruption and nepotism. There's a joke in Japan that the real police pension is a cushy high-paying job in the pachinko industry. But Takiguchi says people in Japan don't talk much about that either.

So how has such a shady, addicting, game of chance remained legal in a country that bans casinos and online gambling? It all has to do with one small, extra step in the cash out system. Pachinko whiz Takahara Daiki shows me the trick.

When Daiki finishes his session, he trades in the balls he's won for a "special prize" — a card with his winning information and a little candy box. It's got picture of Hello Kitty on it. Daiki takes the card and candy outside the parlor to a shoebox-sized slot in the wall about ten feet from the entrance. He passes them through the hole. A shadowy figure hands him his winnings. And presto. Since the money is obtained through this third party exchange shop, pachinko is not technically gambling.

Daiki says he thinks of pachinko as half gambling and half fun. But for his boss, the head chef, it's a different story. Daiki says he goes all the time and often loses most of his pay check.