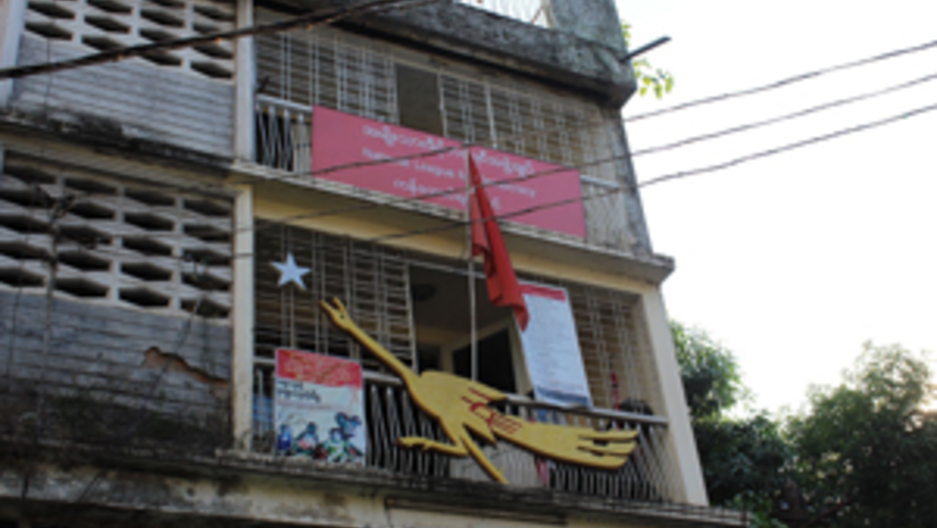 On Wednesday in Naypyidaw, Myanmar's new capital, the country's new parliament gaveled into session. It's the sixth session since the country started to emerge from decades of one-party military rule two years ago. And it's the third since by-elections ushered in the first members of the National League for Democracy, or NLD, the country's main opposition party. Among them was that party's leader, Aung San Suu Kyi.

As the country continues to figure out what a democratic system looks like, the NLD's long-time activists, dissidents, and political prisoners, are figuring out how to work within that system. Phyu Phyu Thin is one of the NLD's new parliamentarians.

Her office occupies two floors of a narrow building along a noisy street. It's buzzing with activity–some related to her new role as an elected lawmaker, some to her old role as a prominent HIV/AIDS activist.

Her activism made getting out the vote easy. Supporters thronged campaign events, and she won handily in last April's elections. Her party, the NLD, now has 42 seats. They're a tiny, but symbolically significant, piece of the 664-seat parliament.

We visited her in her Mingalar Taung Nyunt township office in eastern Yangon. She paused and laughed a little when asked about making the transition from activism to parliament. She said she's glad to be there as her country starts to democratize, and she sees potential to get a lot done. But parliament moves slowly and she sometimes feels like she's wasting time.

One of the NLD's first legislative actions actually aimed to speed things up.

"When they introduced bills, most parliamentarians would talk for an hour. Then questions would take another hour or two," she said, speaking in Burmese. "Everything took so long. So Aung San Suu Kyi and our party made a motion to limit the time spent on these statements to 10 minutes. And it worked."

In fact, Phyu Phyu Thin says the NLD's working relations with the ruling party, the USDP, are pretty good. She says the USDP gave them a warm welcome. And they're open to new ideas, even though they're more conservative than the NLD. It's remarkable considering the USDP is an offshoot of the former military government that was the NLD's main antagonist and oppressor for decades. For many, including Phyu Phyu Thin, it was their jailer.

The current military has a block in parliament. The constitution reserves a quarter of the seats for them. And these guys? They're not as welcoming, she says. They keep to themselves, sitting off to one side in the chambers.

"Even when we break for tea or lunch – most of the MPs will talk and socialize," she says. "But the military MPs go off to a separate part of the room and don't talk to anyone."

Still, she's upbeat about the progress her party has made in its short time in elected office. She points to efforts to upgrade some of Yangon's major institutions–including Yangon University and General Hospital. Soon she hopes to move on her central concern–the country's woefully inadequate health system.

Although observers note a severe lack of resources and the awkward isolation of the country's new purpose-made capital, this parliament has surprised many by a willingness to flex its muscles.

"I live here in Washington where the congress doesn't manage to take on many big issues in one session or even one congress," says Murray Hiebert, a Southeast Asia expert at the Center for Strategic and International Studies in D.C. "These guys have taken on some really heavy, heavy issues. They're now looking at a mining law, they've taken on freedom of assembly. There's just an awful lot of issues, very complicated issues that they're taking on. And getting done with reasonable speed, which I think is impressive."

Before the next general election in 2015, the NLD and others are hoping to push through constitutional amendments that would loosen the military's grip on power. And these things, as Phyu Phyu Thin is learning, take time.