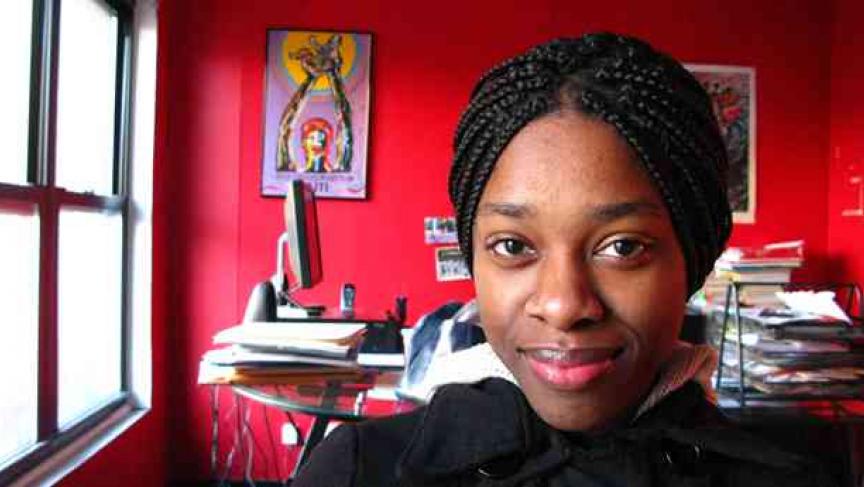 Jardonna Constant has made the most of her move to the United States, after fleeing earthquake ravaged Haiti. (Photo by Alex Gallafent.)

When we met for the first time, Jardonna Constant spoke, in French, about the dramatic shift in her life.

“After the earthquake, I started going to school under a tent,” she said. “Then, without any warning, my aunt called me to tell me I was coming to the States. She was sending for me.”

"When you come here young you learn very quickly,” she explained.

Over the last couple of years, Constant has been on something of a tear. Back in 2010, it wasn’t clear what the future would hold for her. She was living with her aunt in Brooklyn, home to many Haitians, and she held only a tourist visa. Since there was little chance of her returning to Haiti, there was a concern she might end up living here as an undocumented immigrant.

By the end of that year, though, she’d already taken a big step forward by winning a place at a Manhattan high school that specializes in helping immigrant kids catch up. Constant graduated in June. Her aunt became her legal guardian, too. And that led to arguably the most consequential change in her status: a green card.

Darnell Benoit has known Constant since she arrived in 2010. Benoit runs the Flanbwayan Haitian Literacy Project here in New York, a community group for young immigrants from Haiti.

“I’m so excited for her, because the thing she wanted the most, she got," she said. "I know it’s really hard to be here undocumented.”

After the earthquake, Benoit was seeing new Haitian kids turn up at Flanbwayan every day. Things have quieted a bit, but everything in Haiti is still, as she puts it "after the quake." Newcomers do still arrive, moving in with family members who are already here.

Not all of them do as well as Constant.

“We see many other young people that are in her situation and that (progress) didn’t happen. So she’s special, basically,” Benoit said.

Benoit’s youth organization encourages Haitian teenagers to look beyond the confines of the community. The community is necessary, but not sufficient.

Constant has already flown the nest: in September she started at a community college in Queen’s. Thanks to her green card, she’s eligible for financial aid. Right now, she’s studying international relations.

“I wanted to be a diplomat,” she said. “(But) when I told my parents, my aunt, my dad everyone, that I was going to choose the major international relations, they told me diplomacy is not for me.”

Constant’s parents in Haiti want her to pursue a career that will provide sure work, and enable her to make a financial contribution to the family. She speaks French, Creole, English and a good amount of Spanish. She loves the idea of traveling and translating for a living. But she’ll be changing her major next semester.

“The diplomacy has turned into nursing, so I’m really confused,” she said.

It’s a challenge, but hardly greater than any of the challenges Constant’s had to face already. Benoit is confident about her prospects, though.

“The beginning’s always tough, you know," she said. "Once she’s done with the school and ... as she gets older, I think she has a very, very bright future ahead.”