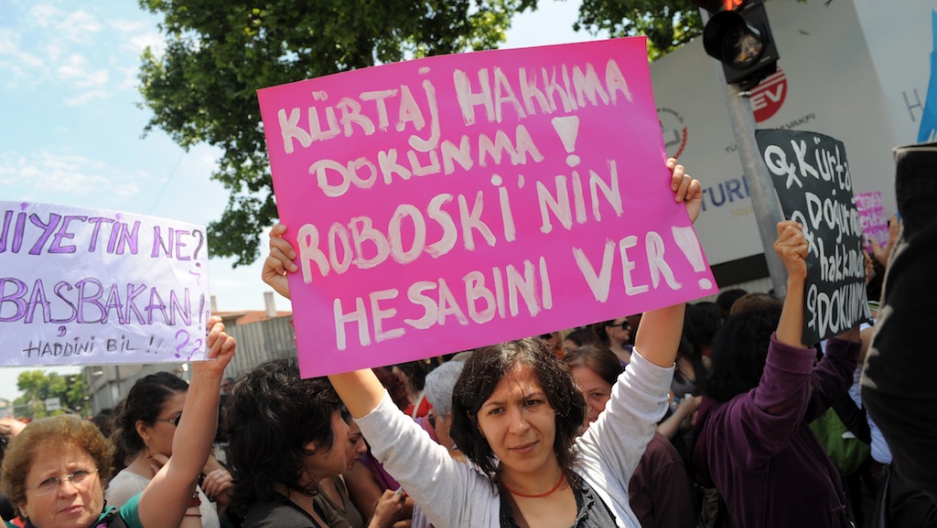 A Turkish feminist (R) holds a placard reading 'Don't touch our abortion rights' during a protest outside Turkish Prime Minister's office in Istanbul in May, 2012. In Turkey, abortion is technically legal during the first 10 weeks of pregnancy, but women have recently reported significant roadblocks to safe procedures.
Credit: BULENT KILIC
Share

Eda K.B., a 37-year-old mother of two, was shaking as she awaited an ultrasound that would determine whether she was pregnant with a third child.

For Eda, raising another child would have been a blessing, but neither she, nor her husband had the financial capacity to do it. They decided to have an abortion.

When the doctor carried out the ultrasound she found the fetus straight away and smiled, but as soon as Eda told her she wanted an abortion, the doctor turned sour, and with a stern voice she said, “elementary school graduates, university graduates, you are all the same.”

This type of harsh rhetoric applied to women seeking abortions is nothing new in Turkey. In June 2012, Turkish Prime Minister Recep Tayyip Erdogan called abortion “murder,” referring to it as an insidious plan and calling for legislation to restrict women’s access to it.

Abortion has been legal in Turkey for almost 40 years, but is restricted to pregnancies up to 10 weeks. The Prime Minister’s call to ban the procedure all together came after mounting concerns over rapid growth in a 75 million people strong, youthful population.

Erdogan’s comments sparked mass protests across Turkey, which ultimately played a big role in keeping the 10-week-long period for legal abortions, a decision announced the by the Ministry of Health in late December.

However, under the new draft of abortion laws, the procedure is becoming increasingly difficult for women to obtain, with patients being forced to undergo a period of reflection with a consultant to “reconsider her decision.”

Eda’s personal abortion account, which was published by Hurriyet columnist Ayşe Arman last week, shows that the process for abortion is already becoming more challenging for women. Eda couldn’t afford to have the operation at a private hospital. She went to a public hospital where she would pay 700 Turkish Liras ($395).

“I waited an hour before the doctor called me in. As if I were her child, she abruptly told me to go and sit down,” Eda recounted to the Hurriyet. “The next thing I knew she was explaining how the reproductive system works. And then in a condescending manner she asked me questions like, ‘So how are you going to protect yourself from now on? If you know how to protect yourself, why didn’t you take the full precautions before?’”

Without being able to digest the emotional abuse she had just been subjected to, Eda was summoned into a room and was told to lie down on a gynecology chair placed in front of an open window. She was not given any information about the procedure that was about to be carried out on her, and the operation took place in a room with an open door, in full view of passerby, and without anesthetic.

Eda says the physical and emotional trauma she underwent will haunt her for life. “They literally vacuumed my baby right in front of my eyes. It rocked me and suddenly I hated everything: myself, my husband my helplessness,” she said.

More from GlobalPost: Turkey has some serious human rights issues

“I felt like I had been raped and then I realized that I had indeed been raped, emotionally.”

Eda’s case is not an isolated one. Thousands of women have sent in similar accounts to the “Abortion is a Right” campaign, which is supported by over 40 NGOs in Turkey.

Many of these women say that the savage way the operations are carried out is a way the government is using to punish women for seeking an abortion in the first place.

Evrim Gozener, Founder of Hayata Dokun, a women’s and children’s rights advocacy group, says that even in 2013 abortion is considered a crime by both men and women in Turkey.

“Putting abortion under the category of a ‘crime’ is sadly supporting by media outlets, soap operas, the education system and thus it is embedding into society, impacting both men and women alike.” Gozener said.

In terms of abortion procedures in public hospitals, Gozener would prefer to not think of it as a punishment per say, but as a result of a lack of resources.

“With such dense patient circulation, I would hope that the real reason for these five minute abortions, without anesthetic or pain relievers, is because doctors can not yield to the demand. But even though I wish to think this way, what Eda was put through even goes beyond a form of punishment – what we call ‘neighborhood pressure and condemnation,’” she said.

Research carried out by Daily Hurriyet has also found that many women who seek abortions at state hospitals are turned away. While some hospitals have time restrictions as little as six weeks, some say their schedules are booked up to dates that pass the legal 10-week period. And many hospitals do not allow abortions for women who are not married.

“Unwanted pregnancies are viewed as a crime committed by a woman alone,” says Lale Tirtil, a member of the Istanbul Chamber of Medicine’s Women’s commission. “No one looks to the husband, or the man responsible. The woman always pays the price, even though it is her body and her right.”