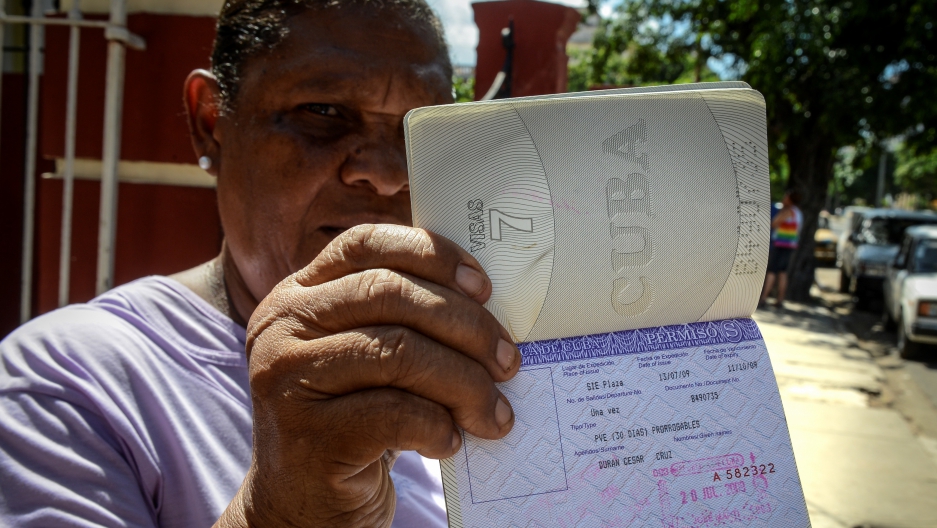 HAVANA, Cuba — When new travel rules go into effect Monday allowing Cubans to leave the island without an “exit permit," many here will be watching airline offices and foreign embassies for signs of a surge in emigration.

The Castro government has controlled the comings and goings of its citizenry for the past half-century with a maddening array of costly permits, fees and other bureaucratic obstacles. Most Cubans wanting to travel or emigrate had to spend hundreds of dollars and hours in lines to petition (and pay) their own government for the chance to get on a plane.

Not anymore. In October, Raul Castro’s government announced that travelers will need only a valid passport to depart. It has slashed fees and decreed additional measures to make it easier for Cubans who live or work abroad to maintain their residency status on the island.

Castro’s move has been widely praised on the streets, even though in practice the exit permit was rarely denied under the old system. Immigration authorities say more than 99 percent of Cubans who completed the onerous process of applying for travel authorization received it.

But even if the country wasn’t quite the “tropical prison” its detractors alleged, Cubans have chafed at the symbolic humiliation of having to get permission from their own government to leave.

“It marks a very significant conceptual change,” said Aurelio Alonso, deputy editor of the state-owned Casa de las Americas journal in Havana. “It was a policy that created a lot of tension.”

“There will be a lot more Cubans traveling, not just for tourism, but also for business,” he said, predicting a new class of travelers would travel to and from the island to supply their small businesses.

Immigration authorities will open 195 processing centers across the island next week in preparation for a surge in the number of residents applying for new passports.

The policy change is also expected to increase the number of people who go abroad for work but maintain homes on the island to take advantage of Cuba’s relatively low cost of living. That may enable many more Cubans to live like other Latin American migrants, and some may even work part of the year in the United States.

Since the Obama administration lifted its own travel restrictions on anyone with family on the island two years ago, floods of Cuban-Americans have returned to visit.

The US law essentially treats all Cubans who arrive on US soil as political refugees, allowing them to stay and receive benefits.

Not all are making emotional trips back to see long-lost relatives or a childhood home. Some come for religious ceremonies, cheaper dental work, and even plastic surgery.

A top Cuban immigration official said on a state TV broadcast this week that even Cubans who obtain US residency through the 1966 Cuban Adjustment Act can retain their residency status on the island.

The act essentially treats all Cubans who arrive on US soil as political refugees, allowing them to stay and receive benefits.

State Department officials released a statement Friday saying the United States would be ready for a jump in visa applications, but that visa regulations for Cubans remain unchanged. "The United States welcomes any reforms that allow Cubans to depart from and return to their country freely," the statement said.

The new Cuban policy will stop short of recognizing travel as a right for all Cubans, however. Military officers and others working in sensitive occupations will need special authorization, as will star athletes such as boxers and baseball players who could earn huge salaries in the American big leagues.

The rules also contain provisions to preserve the government’s ability to deny passports to anyone deemed a threat to national security or for other “public interest reasons,” a category so broad it could be applied to almost any traveler, particularly those whose anti-Castro activism has displeased the state.

Government opponents such as blogger Yoani Sanchez and members of the Ladies in White dissident group could be denied passports simply if Cuban authorities don’t want them traveling abroad and spreading criticism of the island’s one-party, military-led government.

Novelist and dissident activist Orlando Luis Pardo Lazo has declared himself on a “travel strike” until full travel rights are extended to every citizen. “The immigration politics of the Cuban government haven’t changed a bit,” he said.

“Maybe what they’re trying to create is a low-profile way of releasing pressure,” he added. “It’s always been said that the migration question is a secret plebiscite taking place in Cuba. People go out. They vote by leaving.”

By opening up travel to the vast majority of Cubans — even doctors — Raul Castro seems to be making a risky wager that even if more people do go abroad, most will want to return.

Cuba analyst Phil Peters says the authorities hope Cubans allowed to leave “will indeed return in large numbers and bring important benefits to Cuba’s economy, not to mention to citizens who have long chafed at restrictions on the basic right of movement.”

Travel agents at airline offices in Havana say they haven’t seen a significant increase in the number of Cubans trying to make reservations after Jan. 14.

But the lines outside the US Consulate in Havana have been longer than usual in recent weeks, according to the Cubans who run businesses helping visa applicants fill out their paperwork.

“Things are getting more flexible on this side,” said one man waiting in line who asked not be named, gesturing toward the fortress-like American compound along Havana’s Malecon seafront boulevard. “But they still have to give you the visa.”