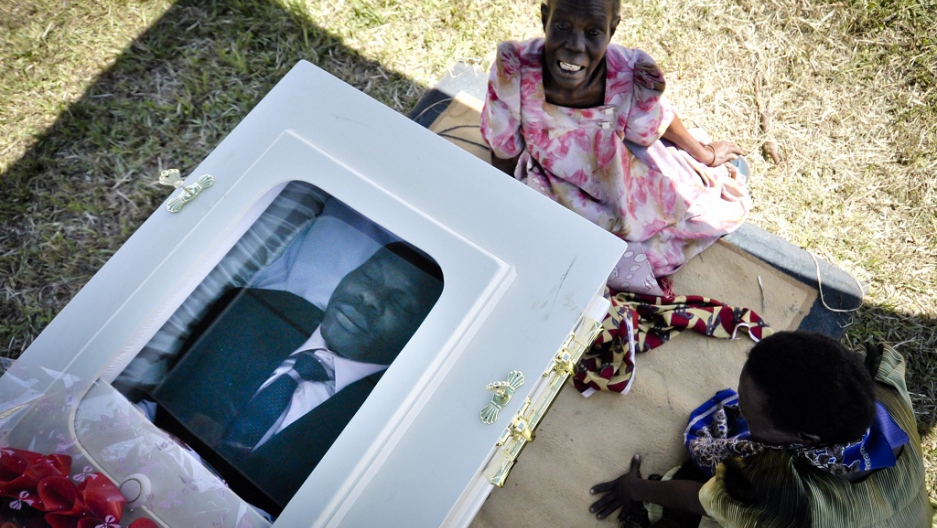 A woman mourns at the funeral of murdered activist David Kato near Mataba, on January 28, 2011. Although the police claims it was most likely a petty crime, targeting Kato's money, many members of the gay and the human rights community hold the Ugandan government responsible for not battling the growing resentments against homosexuals in the Ugandan society. Homosexuality is illegal in many African countries and is punishable by a prison sentence.
Credit: Marc Hofer
Share

LGBT rights advocates within the hacker collectives Anonymous and GreySecurity (Gsec) have continued their campaign against Uganda’s anti-homosexuality bill as government sites and .ug domains have fallen victim to further online attacks.

The websites belonging to the Ugandan Petroleum Exploration and Production Department of the Ministry of Energy and Mineral Development and the Department of Agriculture came under attack by Anonymous on Sunday night, and the attacks have not abated.

The Ministry of Energy and Mineral Development’s website was defaced with the Anonymous logo and a message from the collective.

“Citizens and government of Uganda, take heed, Anonymous is calling,” read the message.

“If nobody else will take action and the government of Uganda refuses to see reason, Anonymous will adopt a scorched earth policy towards Uganda's network infrastructure. You should expect us, for we do not forgive and we will not forget.”

In addition to the defacement of the Ministry of Energy and Mineral Development’s website, a database leak from the Department of Agriculture’s website was published as well. Administrator emails, usernames and passwords were released by Anonymous on the site pastebin, granting access to the site for anyone willing to use the information provided.

Along with the two government sites, myuganda.co.ug was also defaced with a message and a photo from the funeral of Ugandan LGBT activist and teacher David Kato.

Kato, known as Uganda’s first openly gay man and the father of Uganda’s LGBT rights movement, was murdered in 2011 in the Mukono District of central Uganda.

In a message posted to myuganda.co.ug, members of Anonymous stated that the hacker collective is adding government servers to a botnet. A botnet is a group of security-compromised computers connected to the internet with control seized by a third party or hacker. The controller of a botnet is able to control each compromised computer remotely.

“We have been examining your servers from inside and out for some months now, what we have found should have you very troubled. Files containing passwords in plaintext visible from the web, servers so misconfigured it is a wonder they even work well enough to be hacked, backdoors, spurious admin accounts and at least one of your government servers is currently forming part of a botnet that is now firmly under Anonymous control (thanks for that by the way, lulz),” read the statement.

Hackers associated with the Anonymous collective involved with OpUganda have pledged to carry out further attacks against Uganda’s online infrastructure in the coming weeks.