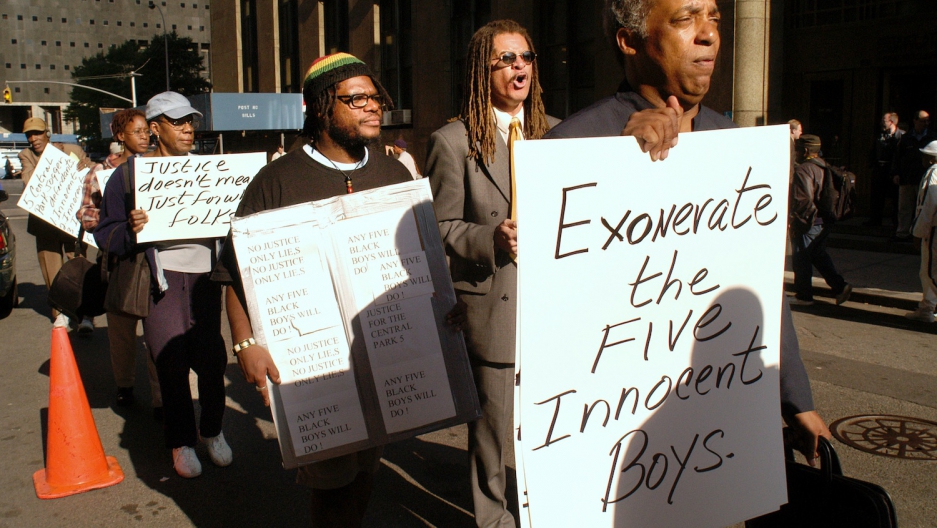 New York City Councilman Charles Barron (R), from Brooklyn's district 42, leads a protest outside of Manhattan's Criminal Court September 30, 2002 in New York City. The group was protesting what they feel has been the wrongful conviction of five Harlem men in the 1989 rape of a Central Park jogger. All of the men have served from seven to twelve years in prison. Prior to the men's conviction, the case sparked a media frenzy similar to the one elicited by the December 16, 2012 gang rape of a 23-year-old physical therapy student in New Delhi.
Share

Can the five adults and one juvenile suspects in the notorious Delhi gang rape case expect a fair trial? Probably not.

On paper, the men accused of the vicious assault will enjoy all the advantages of India's liberal justice system, apart from the high-priced, influential lawyers that only the wealthy can afford. But cases are not tried on paper, and this one exhibits every sign that it will not be tried in the Saket district court where they made their first appearance on Monday. Instead, like so many court cases, government policies, and bureaucratic actions, it will be decided by the country's real rulers: The Mediocracy.

"This is a media trial," senior Delhi High Court advocate Rajinder Singh told me in a Q&A yesterday. "Even the judges who are going to be responsible for these trials are motivated by the media and what is going on in the country."

In almost every story I've reported, whether it's about poor people starving because of government corruption or a city cleaning up its act after an unhealthy dose of the plague, somebody will say it: All this is only happening because of the media attention. And if the media attention goes away too soon, "all this" stops happening, too.  (Consider the Wall Street Journal's neat encapsulation and the Washington Post's history of "high profile" Indian rape cases and the policies they engendered, such as an innovative and effective Delhi Police outreach program called Parivartan, which began in 2006 after a sensational case and then quietly died as the media attention to the issue waned, according to the Economic Times).

Call it the power of the press, and it's a good thing. The government isn't functioning -- it's failing to feed the hungry, or failing to curb corruption (the main cause of the first failure), and the journalists step in.  But the short attention span of the news cycle isn't enough to initiate real change--consider the country's revolving door elections--and as the Delhi gang rape case indicates to some degree, what makes news is often connected with caste- and class-related biases. (Rape and humiliation is a daily reality for women from the castes once known as "untouchable," for instance, yet the media's sporadic coverage of the problem has never gained much traction, as Badri Narayan pointed out for The Hindu).

On Wednesday, a high-handed New York Times editorial cautioned that "there are disturbing aspects to the way the case is being handled." They're right. But the editors might have a look at the newspaper morgue before they get TOO snippy: There are several parallels (as well as contrasts) here to the brutal New York City rape and beating of the so-called "Central Park jogger" in 1989-- which ignited a similar media frenzy.

In both cases, the police were under massive pressure to make arrests following the assault, and quickly netted five (or six) suspects. In both cases, graphic descriptions of the assaults captivated the national news media for weeks, opening new debates on public safety, violence against women, and various sociological concerns to do with race and class. And in both cases, most media reports described the assault in a tone that was, appropriately, horrified, but also in ways that played into existing class prejudices.

In India, words like "savage" and "bestial," when combined with descriptions of the slums from which the alleged perpetrators hailed, tapped the barbarians-at-the-gate fears of the city's elite, encouraging their prejudices against the untraceable migrant population (Mea culpa).  Meanwhile, the victim was always described as a "physical therapist" or "physical therapy student" and her companion as a "software engineer," even though the victim had also migrated from a village to the capital.

In the US, the media trumpeted the New York police claim that the five suspects had confessed to going "wilding" in Central Park on the night in question. The phrase reportedly stemmed from Tone Loc's "Wild Thing," popular at the time, in which the wild thing was sex. But for many readers (and writers) it conjured up much more sinister images--of "wild" or savage teenagers from New York's African-American and Latino neighborhoods who had forsworn all vestiges of civilized behavior and were now "on the loose" right across the street from The Ritz. And in direct contradiction of New York policy in cases of juvenile offenders, the names of these and other suspects were released to the media before any of them were formally charged--including one 14-year-old suspect who later did not figure in the charge sheet.

The result in the New York case was the swift conviction in 1990 of all five "wilding" suspects, four of whom signed written confessions and one of whom made a verbal admission of guilt while in custody but refused to sign on the dotted line. But then things went bad. There was no DNA evidence at the scene to link any of the five young men to the crime--only a sample from another, unidentified man. And as a 2012 film called "The Central Park Five" depicts, all five convicted teenagers retracted their confessions within weeks, claiming that they'd been intimidated or coerced into making false admissions of guilt. (For example, one of the boys confessed to being present after detectives told him they'd found his fingerprints on the victim's clothing).

A decade later, a convicted rapist and murderer, doing a life sentence for other crimes, confessed to raping and beating the Central Park jogger, not as part of a gang, but all by himself, and DNA testing confirmed that he was, indeed, the person who had left behind the only physical evidence that police had from the scene of the crime. Though the so-called "Central Park Five" had also confessed to other crimes they allegedly committed that night, and police insisted they still believed the five had participated in the assault, evidence or no, all five men were released from prison and their names were removed from the sex offender registry. A year later, three of them sued the City of New York -- each seeking $50 million in damages.

In India, we must await the verdict--and inevitable appeals.

In the New York case, the Central Park jogger survived her ordeal but was left with no memory of the event, so there was no evidence apart from the DNA sample and the confessions of the five suspects. In India, the victim survived long enough to make a statement, and was allegedly able to identify her attackers. Moreover, her male companion, though beaten badly himself, was allegedly a witness to the entire assault, and also able to identify the attackers and recall the crime in great detail.

The problem is that in this atmosphere it may prove impossible for anyone to question those alleged facts. How did the victim identify the alleged attackers--without prompting, from an array of photos that included many others from similar backgrounds, with similar dress? For how much of the ordeal was her companion conscious? How did he make his identification of the attackers? (Again, I am not expressing any personal doubt or knowledge of the actual evidence here, only pointing out that the issue is not simply "what happened" but also "are these men, and all of these men, guilty of all of these charges?")

The lynch mob atmosphere, as in the Central Park jogger case, means that it may be very difficult to know beyond a shadow of a doubt, even after the verdict comes in.

As the New York Times pointed out, lawyers initially refused to defend the suspects (and tried to block their fellows from doing so), though the accused now have court-appointed representatives. But where the NYT editors think the judge's decision to try the case in camera (i.e. without allowing the media to observe and report on the proceedings) will make it all the more likely that the proceedings will amount to jumping through hoops before coming to an inevitable conclusion, I'm not necessarily inclined to agree.