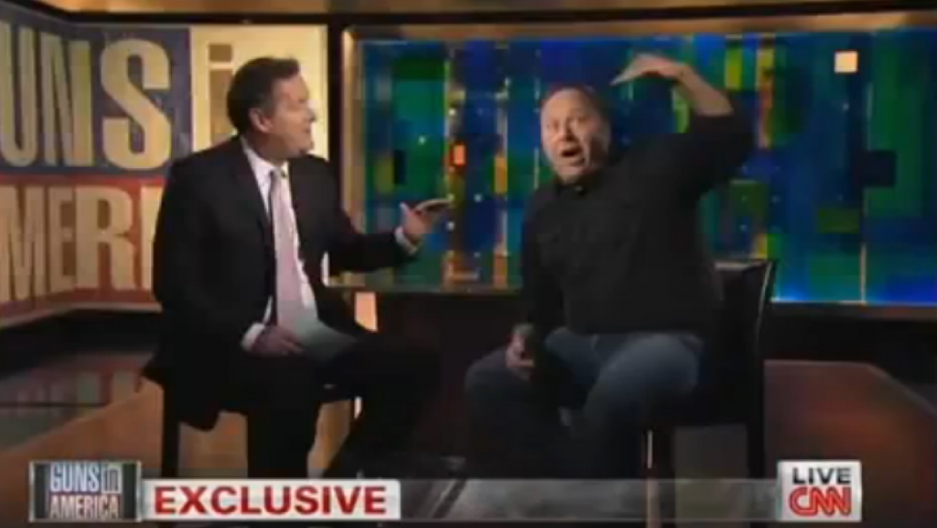 Alex Jones, a syndicated talk show host known for conspiracy theories, duked it out with Piers Morgan Monday night on the issue of gun control.

Jones, a supporter of the movement to deport Piers Morgan over his gun control stance, said on Morgan's CNN show that "1776 will commence again if you try to take our firearms."

Morgan has been a vocal supporter of gun control in America since the attempted murder of Rep. Gabrielle Giffords and the recent Sandy Hook Elementary School shooting, said the Daily Mirror.

Jones' bizarre rant on Morgan's CNN show may not surprise his fans, but it made headlines after his appearance on the program.

The shock jock accused Morgan of many offenses, including allegedly being part of a global conspiracy called "The New World Order."

Jones also said Morgan should go back to Britain and answer for what Jones alleged was his role in the News of the World phone-hacking scandal; Morgan was the editor of the Sun-owned Daily Mirror.

Jones was on the show to discuss a petition to deport Morgan, but the interview descended into near-hysteria, with Jones at one point mocking Morgan's accent.

Jones also railed against drug companies that dispense what he termed "suicide pills," like Prozac, which he called the real culprits behind gun violence.

Morgan remained calm and staid during the interview, likely in an attempt to counter his guest's outbursts.

Jones also said that Britain's low gun murder rate was made up for by its anarchic and violent society that even Morgan had to flee.

The British media were not impressed.

"The mad are mad because they do mad things but don’t think it’s mad to do them: most insane people operate by a rational order of their very own."

[View the story "Alex Jones to Piers Morgan: '1776 will return if you take our guns'" on Storify]