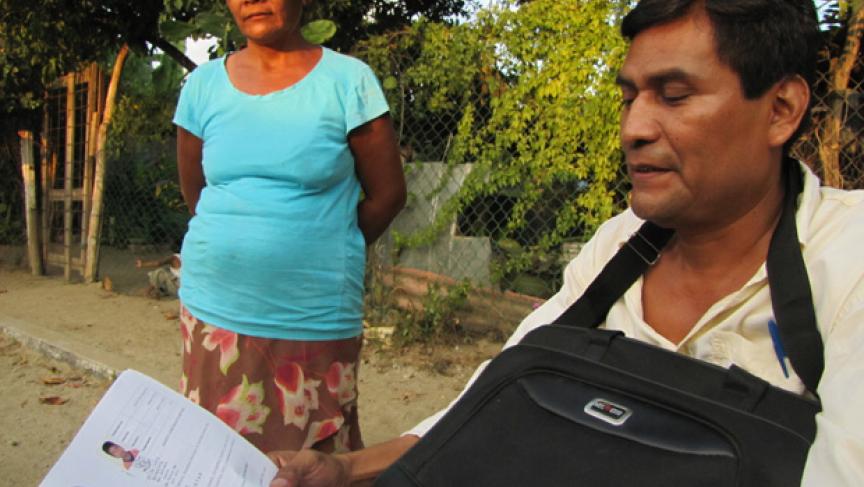 Octavio Martínez is known as the man who brings people back from oblivion, by helping them get registered. (Photo by Mónica Ortiz Uribe.)

Octavio Martínez is easily recognized in his hometown.

He lives in Santa Maria Huatulco, near the emerald bays of Mexico’s southern Pacific coast, in the state of Oaxaca. Tourism here means work. But some of the poorest job seekers will not be hired at places like hotels and restaurants because they are undocumented.

Martínez is known as the man who brings people back from oblivion.

On a recent afternoon, he rides in a battered old minivan with no air-conditioning. Martínez can’t drive himself because he is paralyzed from the waist down. He gets around on a wheelchair and with help from a generous network of friends — from taxi drivers to attorneys.

A young woman in a torn tank top with a toddler at her side stops him on the sidewalk.

“You’re the one who does the civil registries, right?” she asked.

Her husband needs to get his paperwork in order. She asks how much it costs and they agree to meet over the weekend.

Mexico’s National Registry estimates that between seven and nine million Mexicans lack a proper birth certificate. Here, babies are not automatically registered at birth. Mexican parents must take their newborns to the local civil registry office.

Those who don’t, typically live in Mexico’s rural or indigenous regions or are extremely poor.

“A lot of these people, they don’t understand the importance of having a birth certificate until they have to get the children to school,” said Karen Mercado, who heads the BE Foundation, a non-profit based in Mexico City dedicated to tackling this problem. “By then, the children are five, six years old and they have to pay fees. People who live on less than $5 a day. They tell us, ‘Look, a birth certificate is a luxury.’”

People who lack registration are often those who tend to immigrate to the United States for better opportunities, as well. When that happens, their situation becomes even more complex — they’re not only invisible in their home country but in the United States, too.

“They become doubly invisible, doubly undocumented,” Mercado said. “They have no country.”

These immigrants are ineligible for Mexican consular benefits, including grant money and identification cards that allow them to get a federal tax identification number. If Congress ever enacts immigration reform, those doubly undocumented would likely be ineligible to participate.

That’s one reason why, back in Mexico, Martínez works so hard.

Oaxaca, one of Mexico’s poorest states, is where many unregistered Mexicans live. During one month each year, the state government runs a program that lets people register themselves for free. But it’s not enough. Martínez helps hundreds of people year-round. The city gives him a small stipend for his work.

On a recent evening, Martínez visits a woman who lives on the outskirts of town, off a rugged dirt road. Her 9-year-old boy is unregistered. At school, the teacher lets him sit in class, but without proof of identity, he won’t get credit or a diploma.

“We now know that registering your child is important,” she said. “Without a birth certificate, it’s like they don’t exist.”

Undocumented Mexicans can face a life with little promise. Not only are they deprived of an education and a formal job, they also can’t open a bank account, get legally married or register their own children. Even worse, they can be targeted by organized crime, either as a victim or a recruit. Being undocumented makes it extremely difficult for police to track them down.

The problem of under registration isn't exclusive to rural regions. It’s also found in the urban jungles of Mexico City.

Brijida Mata Luna has spent half of her life selling dried chile and garlic off a noisy sidewalk in the country’s capital. She thinks she’s around 80 years old, but doesn’t know for sure because she’s never celebrated her own birthday.

Only recently did a church group help her get a birth certificate. Now, she might receive government welfare. There’s value in that, but being registered also means something more: dignity. When Mata Luna dies, she won’t end up in a nameless grave.Mata Luna says she's glad to have my papers.