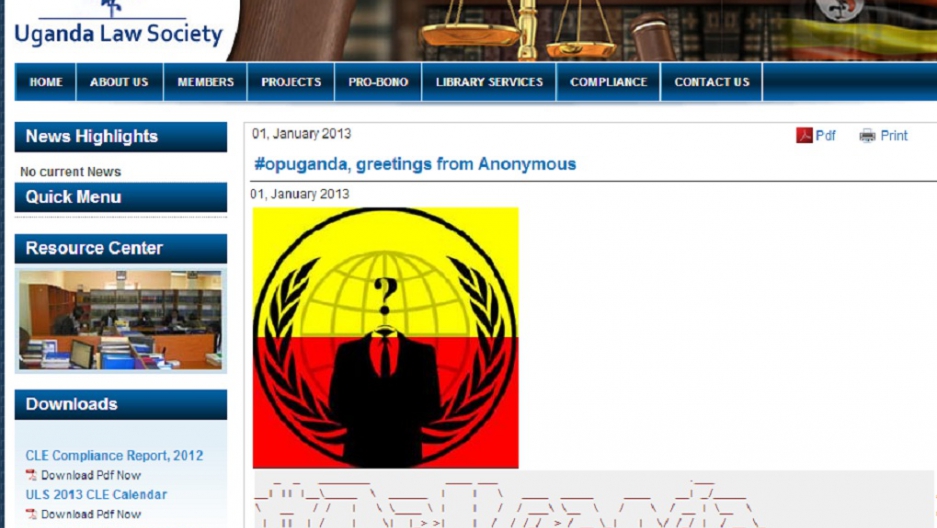 A screengrab of the Ugandan Legal Society's webpage defaced by Anonymous as part of OpUganda
Credit: Screengrab
Share

Anonymous and GreySecurity (Gsec) have launched the second phase of OpUganda, a campaign designed to bring pressure on the Ugandan press and government in protest of the country’s anti-homosexuality legislation.

While there is no clear ideology or set of beliefs espoused by the amorphous and multifaceted hacker collective, some factions within Anonymous have taken a keen interest in the case of Uganda’s discriminatory legislation against LGBT people.

“HOMOSEXUALITY IS A FREEDOM. It is a choice every man or woman has. It is NOT something to be governed. It is NOT a sin. It is freedom,” read an OpUganda press release issued by the collective on Wednesday.

And the operation doesn't stop there. As more private sector Ugandan websites are being hacked, hackers have pledged to attack major Ugandan government websites, as well.

"We are currently planning attacks for January we can confirm that 4 Ugandan government sites are top priority,” said Twitter account AnonTitan, which is closely linked with OpUganda.

Anonymous claims to have access to government websites, including those of the Ugandan Justice, Law and Order Sector; the Petroleum Exploration and Production Department of the Ministry of Energy and Mineral Development; the Uganda Biodiversity Information Facility; the Uganda National Bureau of Standards and the Health Service Commission.

In a stand against what one Anonymous member called “bullying and scapegoating,” last August the collective hacked and vandalized the website belonging to Ugandan Prime Minister Amama Mbabazi.

Last November, a controversial provision in Uganda’s anti-homosexuality bill that allowed the death penalty against those convicted was removed. However, Ugandan Speaker of Parliament Rebecca Kadaga has pledged to pass the law by the end of the year as a “Christmas gift” to the bill’s advocates.

Many of the bill's advocates continue to call on Ugandan Parliament to enact the legislation quickly.