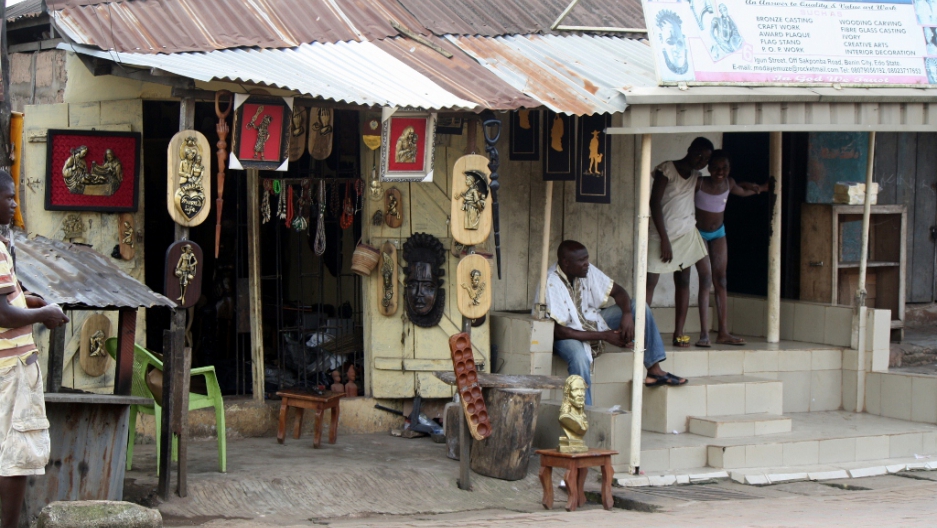 Local artists run shops like this in Benin City that have been in their families for generations.
Credit: Heather Murdock
Share

BENIN CITY, Nigeria — In this city, statues adorn the streets and there’s an art museum in the town square. It is the heart of Nigeria’s art world.

But officials say millions of dollars worth of Benin art remains in Europe and the United States, stolen more than a century ago by British colonials. And the people of Benin want it back.

“If anybody can go down to the British government and tell them to bring those artifacts [back], we still need them in Benin,” Uyi Omoruyi, a local artist that creates bronze sculptures and woodcarvings told GlobalPost outside his small shop. “We still need them because all of them represent Benin culture.”

Benin City is the capital of Edo State in Nigeria — not to be confused with the Republic of Benin, a neighboring West African country. A traditional king, known as the “Oba,” still informally rules the Kingdom of Benin.

Umogbai Theophilus, the curator for Nigeria’s National Museum in Benin City told GlobalPost that Nigerians have been petitioning for the return of their ancient art works for decades, but most of it remains at large.

“In the past we’ve had successes bu  t they were very modest compared to what was taken away,” he said.

Foreign art collectors, however, argue that the history of Benin Kingdom is kept alive by the art, which travels the world.

Last summer, after obtaining 32 works of Benin art from Robert Lehman, the great-grandson of the founder of the now-defunct investment group, Lehman Brothers, Boston’s Museum of Fine Arts said it would “present a number of public programs that further the appreciation of the Kingdom of Benin’s renowned arts, cultural heritage, and complex history.”

Lehman’s collection includes bronze and ivory statues, plaques and utilitarian items. The most famous bronze bust in the group is from the late 15th or early 16th century and is called the “Commemorative Head of a Defeated Neighboring Leader,” an homage to Benin’s victories.

Nigerian officials, however, say the Boston acquisition along with other collections around the world are the legal property of the Benin royal family. In response to the museum’s announcement, Yusuf Abdallah Usman, the director-general of Nigeria’s National Commission for Museums and Monument demanded the art be returned.

"Without mincing words, these artworks are heirlooms of the great people of the Benin Kingdom and Nigeria generally," he said. "They form part of the history of the people. The gap created by this senseless exploitation is causing our people untold anguish, discomfort and disillusionment."

Most of the Benin art traveling the globe as museum exhibits was taken in 1897, at a time when the Kingdom of Benin had been flourishing for hundreds of years. And while tales vary, the generally accepted story of the stolen art goes something like this:

In the late 19th century, the Benin Oba enacted trade embargos against the British who were growing more powerful in the region, as European empires competed for African resources.

In response to the embargos, a party of British men traveled to the kingdom’s capital. By most accounts, they were planning to attack the city and depose the king. But the nature of their trip is still disputed. Either way, the British party was attacked, and most of the men were slaughtered.

The result is not disputed. The British launched a “punitive expedition” and sacked the capital. They trashed the palace, overthrew the Oba and forced him into exile. Most of the more than 4,000 pieces of art in the palace were looted, and much of it was sold internationally to pay for the battle.

“After cutting all the art work away they burnt the old palace,” he said outside the museum, which sits on a grassy park in the city’s main roundabout. “They burnt it down in retaliation for what they felt was Benin aggression to the party that came earlier.”

“In the olden days any event that took place is [remembered] through art work,” local artist Williams Edosowan told GlobalPost. “There were no cameras to snap any events. These days now if you are doing marriages there is a video that will cover it.”