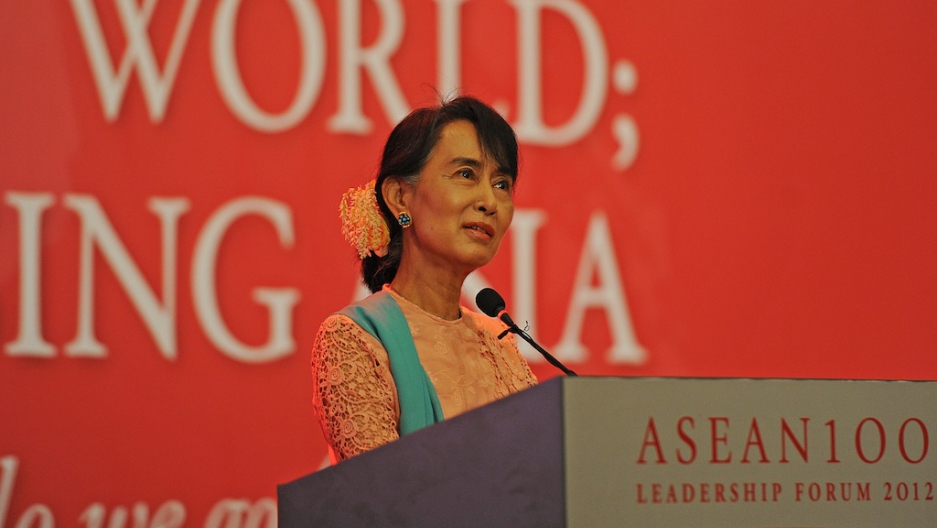 Myanmar democracy leader Aung San Suu Kyi — daughter of Aung San, considered to be the Father of modern-day Burma — talks during the 'ASEAN 100 Leadership Forum 2012' at a hotel in Yangon on December 6, 2012. Suu Kyi was speaking on the topic of ' Resilience in Turbulent Times.'
Credit: Soe Than Win
Share

From Malala Yousafzai to Aung Sang Suu Kyi to Hillary Clinton, 2012 was a dramatic year for women.

Women made major steps forward in politics and in business. But horrific acts of violence against an Indian medical student and an outspoken Pakistani teen proved how far there still is to go for women's rights.

Here's a look at some of the big milestones for women this year.

1. Women clean up in the November US elections, and will hold 20 Senate seats in January

The "war on women": not exactly a winning strategy.

Obama's re-election wasn't the only big story out of the November US elections: 20 women were elected to the Senate this year, a record number. Although the numbers are still grossly skewed in favor of men in the Senate, America's female politicians may prove they can punch above their weight in 2013.

Female voters had a decisive role in the election, with a healthy 55 percent of the women's vote directed to Barack Obama. Concerned about reproductive rights, the economy, and same-sex marriage (among other worries,) 6 percent more women turned out to vote than their male counterparts, skewing in favor of Obama and the Democratic Party.

As for those politicians who took what many considered to be grossly anti-women stances — and aligning themselves with the War on Women, legitimate rape, and the vitrol of Rush Limbaugh? They were almost overwhelmingly awarded with a one-way-ticket out of political office, observed the Daily Beast. So much for that political strategy.

2. Malala Yousafzai brings the attention of the world to Pakistan and the plight of women there

Shot in the head by purported members of the Taliban for the "crime" of attending school, the articulate and outspoken Malala Yousafzai brought world attention to the plight of women in Pakistan — and she's only 15 years old.

Read more from GlobalPost: Malala Yousafzai: Why did the Taliban shoot this girl? (VIDEO)

Shot in October in Pakistan's Swat Valley, Yousafzai was transported to England for treatment and appears to be making a full recovery. She has become an international celebrity (seemingly somewhat against her natural inclination), collecting awards, media attention and the admiration of millions.

Yousafzai has shined a bright light on the oppression faceb by Pakistani women— and has even galvanized the Pakistani government into the most concrete action on gender issues in years.

She's no stranger to dissent: she was blogging for the BBC on social issues at the tender age of 11, and is the daughter of an education activist, who also had his life threatened for the crime of seeking gender equity in South Asia.

The daughter of General Park Chung-hee, Geun-hye grew up in South Korea's presidential palace after Chung-Hee successfully led a 1961 military coup that won him the presidency.

But her father was assassinated in 1979, only five years after the murder of Geun-hye's mother, forcing the young woman to take up the mantle of political responsibility. A career engineer, Geun-Hye has served in Korea's National Assembly since 1998, and hopes to commit herself to "economic democratization" while in office.

Change hasn't only happened in Asia: in Africa, Malawi's Joyce Banda found herself in the office in April following the sudden death of former President Bingu wa Mutharika. Banda quickly swung into action, suspending the nation's retrograde anti-gay laws, and working non-stop to extract the Southern African nation from a crippling economic crisis.

Banda, a life-long gender activist, hasn't been able to work any economic miracles yet — but give the 62-year-old leader time.

Women proved a major presence in Southeast Asia, taking the helm of governments of Thailand and Australia. And Aung Sang Suu Kyi presented a dynamic challenge to the weakening grip of Myanmar's military rulers.

Female leaders made international headlines during US President Obama's much-vaunted visit to Southeast Asia, as he flirted with Thai premier Yingluck Shinawatra in Bangkok, embraced Aung Sang Suu Kyi on her home-turf, and yukked it up with Australian Prime Minister Julia Gillard in Phnom Penh.

These women represent the most public aspect of social change in Southeast Asia, as women continue to take greater leadership roles in their communities and in their government — including vocal indigenous women from across the region. Although the average Asian parliament is comprised of only 18.5 percent women, according to IPU statistics, expect that figure to shift in 2013.

The horrifying gang rape and eventual death of a 23-year-old Indian medical student in New Delhi shocked the world.

Indian observers got angry, very angry. The unnamed student's murder has served as a social flashpoint of sorts in India, as thousands continue to pour into the streets to demand that the government — and men — to do more to protect women from a pervasive culture of sexual assualt.

It remains to be seen if any structural changes will come of the tragedy, but the floodgates have opened. Indian women's advocates have made it clear that they are not going down without a fierce fight, and have no intention of staying silent.

Hillary Clinton navigated WikiLeaks, Syria, North Korea and Southeast Asia — not to mention the Libyan diplomatic crisis – in a powerful final year as secretary of state. She accompanied the president in a historic first visit to Myanmar.

She even proved she had a sense of humor with her good-natured response to the (hilarious) "Texts from Hillary" Tumblr blog.

Clinton's banner year didn't stop there: she was named 2012's most admired US woman for the 17th year running, according to a Gallup poll. Now that's longevity.

Recently admitted to the hospital for a blood-clot, Clinton appears to be on the mend, and she's expected to testify on the Benghazi affair when she recovers. That's a good thing: most reports indicate Madame Secretary is gearing up for another presidential run for the 2016 race.

8. Women control the massive economies of Brazil and Germany—and a woman helms the IMF.

As the world suffered from financial crisis after financial crisis, women proved to be major economic players, from heads of state to the chief of the International Monetary Fund.

German Chancellor Angela Merkel helped steer the European Union through the Eurozone crisis, intent on keeping the coalition together despite chilling indications that the center could not hold. The Eurozone now appears to be on a more stable track thanks to a series of reforms, though as Merkel herself warned at the end of the year, the region isn't out of the woods yet.

Brazilian President Dilma Rousseff helped to guide the planet's 6th largest economy through brutal international economic conditions, implementing a bevy of stimulus measures aimed at pushing growth to 3.3 percent in 2013, according to Reuters.

Although economists predict a considerably less optimistic 2012, a Brazilian slowdown and yet more inflation, Brazil remains one of the stronger developing economies — and Rousseff appears to be holding onto her popularity, despite political scandal.

Most recently, Lagarde weighed in on the USA's fiscal cliff debate on CNN — and shockingly enough, she thinks a quick fix probably isn't the answer.

2012 was a good year for businesswomen. Twenty women now serve as CEOs at the 500 biggest US corporations — still a small number. But a real improvement over the past. Women are showing up more and more on the board of major corporations as well, with around 16 percent representation in the ranks of American Fortune 500 firms, and a more impressive 40 percent in progressive Norway.

More than half of these women landed the top job just since 2011, including Marissa Mayer, the much-vaunted new CEO of Yahoo. Could all this sudden change indicate that equality may be coming a bit faster than anticipated?

10. Every country sends a woman to the 2012 Olympic Games in London

The 2012 London Olympics proved remarkable for female athletes, who broke records, competed in previously male-centric sports, and achieved previously unthought of athletic heights. Women made up 45 percent of the 2012 Games participants, the closest to gender equity the international sporting event has ever achieved.

The Guardian's wrap-up of the 2012 Olympics found that 37 women beat world records in their disciplines, while male athletes shattered a mere 29.

Even long-time holdout Saudi Arabia sent two female athletes to the Games, including 18-year-old runner Sarah Attar and judo athlete Wojdan Shahrkhani. They were joined by first-time female athletes from Brunei and Qatar.