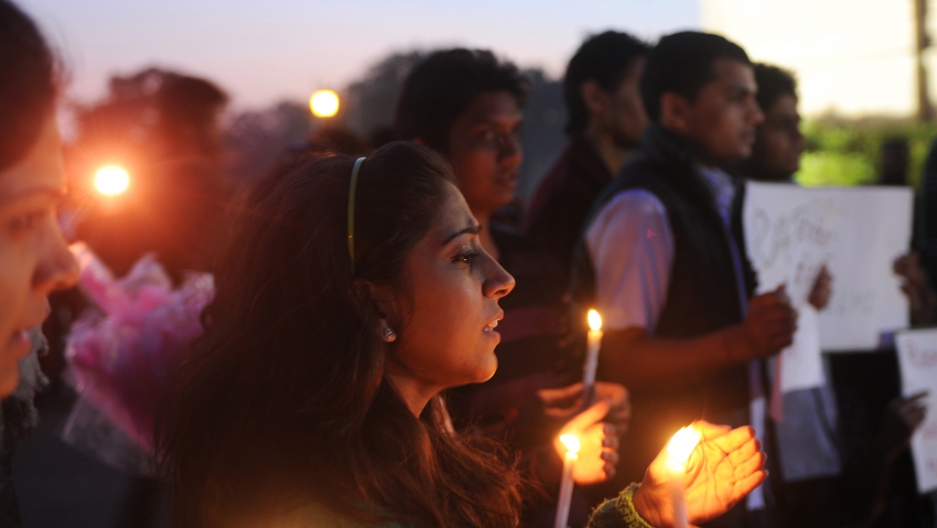 Indian students and activists carry candles at India Gate during a protest following the gang-rape of a student in New Delhi on December 19, 2012. Indian police December 17 arrested the driver of a bus a day after a student was gang-raped and thrown out of the vehicle, reports said, in an attack that has sparked fresh concern for women's safety in New Delhi. The attack sparked new calls for greater security for women in New Delhi, which registered 568 rapes in 2011 compared with 218 in India's financial capital Mumbai the same year.
Credit: SAJJAD HUSSAIN
Share

Americans often lament that the massive campaign contributions of the tobacco lobby or arms manufacturers stack the deck against our politicians passing certain types of legislation. But India's experience with drastic limits on these documented campaign contributions tells a different story, according to the local business press: When you keep big business out of politics, you let (alleged) criminals and gangsters in.

According to Forbes India and the Economic Times, raising legal limits on campaign expenditures and allowing companies to contribute as much cash as they want--as long as it's on the books--will "reduce the wealth advantage enjoyed by the tainted" and thus eliminate the incentive that makes political parties field candidates with long, if not always proven, criminal records.

Even anti-corruption watchdog Transparency International has joined the fray, writing to the prime minister to argue: "We demand special courts which should be fast tracked, be set up for dealing with all politicians, especially legislators, charged with heinous offence against women, including rape and molestation," according to India's DNA newspaper.

According to the Economic Times, the spending limits for one parliamentary constituency are stunningly low -- and completely dwarfed by illegal spending. In 22 states and Delhi, the limit is 2.5 million rupees (around $45,000), while in smaller states the limit is even lower. Because so much of the real spending is therefore illegal, parties need untraceable "black money" to fund their campaigns, rather than documented contributions. And that gives dubious characters -- crime is, after all, a cash business -- a distinct advantage.

"Cash is easier to spend in elections. It doesn't leave any trail," Harish Damodaran, author of “India's New Capitalists,” told me after one such campaign contributor was killed in a Scarface-style shootout in New Delhi.

“If you want to have a political rally and get people, you have to pay people in cash. That's why politics and the liquor business go together very well, and not politics and say, software.”

As I've reported earlier for GlobalPost, an Indian outfit called the Association for Democratic Reforms and National Election Watch has worked tirelessly to expose the degree to which alleged criminals have infiltrated India's political system. First, activists forced the passage of mandatory rules that require all candidates to declare any criminal cases against them, as well as their financial assets, with the Election Commission before they can stand for office. And now, ADR / NEW tabulates and disemminates that data to Indian and foreign news outlets before and after every state and national election, to show just how many such alleged criminals each party is fielding, and later, how many of them have won.

According to ADR, the number of politicians implicated in criminal cases has steadily increased over the past several elections, despite those efforts. And around a quarter of India's current members of parliament have criminal charges pending against them.

Perhaps more disturbing, even as that same parliament decries last month's gruesome gang rape, calling for fast-track courts and strict punishments, the alleged criminals among their ranks face charges of rape, sexual harassment and other crimes against women -- suggesting that cleaning house should begin, well, at home.

As GlobalPost reported earlier, India's leading political parties have offered tickets to 27 candidates accused of rape and a whopping 260 candidates facing charges for crimes against women ranging from assault to harassment over the past five years. As a result, two members of the current parliament and six members of the various state legislative assemblies are facing rape charges, while 36 others face charges for lesser crimes against women.

It's not that they love rapists, or hate women, according to research conducted by India's National Institute of Public Finance and Policy. India's political parties, like those of America, simply love money. And the same guys facing criminal charges for rape, murder, attempted murder, sexual assault, sexual harassment, and so on also know how to bring in the long green.

According to NIPFP research (as tabulated by the Economic Times), voters do attempt to punish parties who choose these tainted candidates. But in many cases, there's no alternative because the parties put alleged criminals up against other alleged criminals. Meanwhile, "money has the power to increase vote share. And this means higher campaign expenditures, which tainted candidates are most eager to provide. That's why parties welcome them into their fold as it helps them fund other candidates even if tainted ones lose," says ET.

So it comes down to this: Do you want Tata Group's Ratan Tata and Wipro's Azim Premji and, okay, maybe Vedanta's Anil Agarwal, dictating public policy -- with their degree of influence a matter of public record? Or mysterious figures with long, never addressed lists of criminal charges against them, whose contributions are completely unknown?