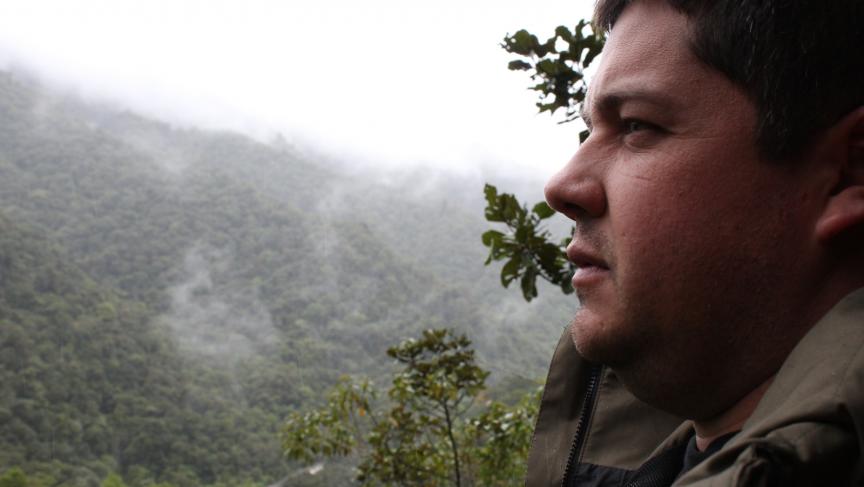 Editor's Note: This story comes to PRI's The World as part of a partnership with PBS's NOVA.

Costa Rica, a tropical country known for its national parks and ecotourism, has gone one step further to protect its environment: a ban on hunting.

But even in this environmentally conscious nation, the new ban faces obstacles.

Costa Rica does not have a lot of hunters, but if you talk to some environmentalists, they will tell you that hunting has caused problems in certain parts of the country.

Take Tapantí National Park, a patch of tropical rainforest in the heart of Costa Rica.

“Purisíl is a town close to the national park,” said park ranger Leonel Delgado Pereira. “(It) has many, many hunters.”

These hunters outside the park have caused trouble inside, says Delgado Pereira. He says sometimes hunters sneak into Tapantí to kill animals, even though it is illegal. At other times, they hunt with their dogs along the border of the park, and occasionally the dogs escape and end up killing animals in the park or getting killed themselves.

Delgado Pereira says recently a group of hunters blamed the disappearance of their dogs on a rare black jaguar, and in retaliation, the men killed the jaguar.

These types of activities have caused a noticeable decline of animals within Tapantí and in other protected areas, says Delgado Pereira.

In the last few decades, Costa Rica has enacted a series of laws to safeguard its environment.

For instance, the country has locked up nearly a quarter of its land for conservation purposes, and inside these protected areas, sport hunting and trapping have been banned.

But throughout the rest of the country, hunting has been permitted under the country’s wildlife protection law, which passed in 1992.

A number of environmental groups have been frustrated with that law. Gino Biamonte, president of the Association for the Preservation of Flora and Fauna (Apreflofas), says his group and others lobbied the Costa Rican legislature to ban hunting.

“It’s completely anti-democratic to allow an activity that goes against the good of most of the population (to benefit) the very few,” he said.

Biamonte says changing the law wasn't a priority for the legislature, and for years nothing happened. So he and his colleagues went to the public.

Environmentalists took advantage of a new “popular initiative” process in Costa Rica. Apreflofas and its partner organizations collected 177,000 signatures in support of a new wildlife management law that bans sport hunting and trapping across the entire country, inside and outside national parks.

That bill went before Costa Rica’s Congress this month. It passed unanimously and is expected to be signed into law by President Laura Chinchilla.

The hunting ban — the first of its kind in the Americas — would go into effect early next year, but it would take another 12 months for all currently valid hunting licenses to expire.

The Hunters Push Back

Ricardo Guardia, president of the Costa Rican Hunters Association and an attorney who wrote the national gun law, says he will contest the ban on sport hunting all the way to the constitutional court.

Guardia contends that the Congress did not follow proper procedures in passing the law, and he argues that hunting is a reasonable use of natural resources that doesn’t harm the general public.

The new law does allow hunting in two special circumstances — subsistence hunting by indigenous groups and culls to control overpopulation. But Guardia says with virtually no legal hunting, the law could cause a poaching free-for-all in protected areas and cause wildlife numbers to plummet.

Costa Rica’s Minister of the Environment, René Castro, in an email said the government would redouble its efforts to keep poachers out of national parks when the hunting ban takes effect.

But, given the country’s limited resources, some say enforcement will be a challenge.

Alonso Villalobos, a political scientist at the University of Costa Rica, says even if the hunting ban is not implemented perfectly, the law is symbolically important.

Costa Ricans think of themselves as “people who are in a very good relation with the environment,” Villalobos said. “And in that way, we have made a lot of progress. We have a stronger environmental consciousness.”