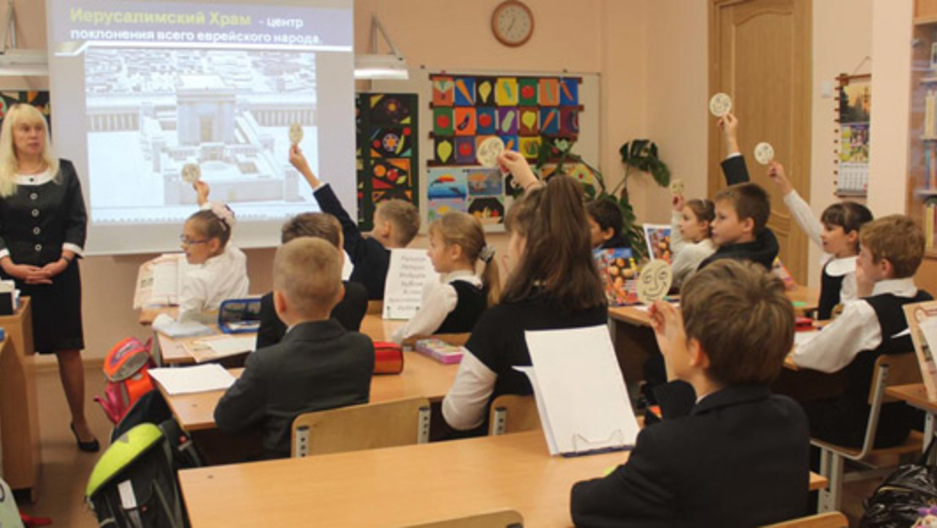 A class called the "Basis of Secular Ethics" is popular among the students. (Photo: Matthew Brunwasser)

Share
This year Russia required fourth graders across the country to take a religion class. There are six choices: Orthodox Christianity, Islam, Judaism, Buddhism, secular ethics or world religions. Most Russians consider themselves Orthodox Christians, but most did not choose that class for their children. Matthew Brunwasser reports. The fourth graders in this "Basis of Orthodox Culture" class are discussing some pretty heavy duty concepts. "God is a creator," says the teacher. "How do you understand this? what does it mean?" A small girl answers, "he created the whole world." The teacher is using brand new textbooks and audio/visual materials prepared by the education ministry. This little classroom in St. Petersburg is one of the fruits of a two-decades-long battle by the Russian Orthodox Church to introduce religious education into every school in Russia. Church spokesman Vsevolod Chaplin says it was a tough slog. "We had very uneasy and sometimes emotional discussions with some state officials," said Chapin. "Some members of the pedagogical bureaucracy are still very much Soviet-minded." In the end, Chaplin says, the church is pleased with the outcome. "I think both children and their parents understand that such an education brings more ethics into the life of the child and the family, it brings more understanding of what is the difference between a Muslim and a Jew and a Christian and a non-believing person," Chaplin says. But the new course wasn't what the church bargained for. Analysts say the Church had to accept compromise with the deeply secular Russian state bureaucracy. The Church initially pushed for religion classes only on Russian Orthodox Christianity. While polls find that between 70 and 80 percent of Russians consider themselves Orthodox believers, many are clearly uncomfortable mixing religion and secular education. Nationwide, only a third of parents chose the class on Orthodoxy for their children. One mother, Natalia Sapruga, who considers herself a devout Orthodox Christian, says religion doesn't belong in public schools. "We think religion is a really private matter and religious education should start in the family and continue in the church," says Sapruga. "That's why we chose this secular ethics course that is aimed at helping our children developing qualities like honesty, kindness and justice." At this "basis of secular ethics" course, the class is discussing Abraham and his importance to both Jews and Muslims. The class is the most popular of the six choices, both nationally and at this school. In fact here, only four out of the 110 fourth graders take the Russian Orthodox class. Teacher Natalia Savinova says the class may be so popular because it goes beyond religion. She says parents want their children to be more moral people but don't feel confident in their ability to teach them at home. "This class has been introduced, I think, because families don't give enough time to the upbringing of their children and have placed this responsibility on the shoulders of the school," says Savinova. "The course has the potential to affect the upbringing of children and is meant to help solve the problem of morality in Russia. The third most popular course is a survey of world religions. In addition to that course, the secular ethics curriculum and the class in Russian Orthodoxy, there are basic courses in Islam, Judaism and Buddhism. Political commentator Konstantin Von Eggert says the Russian Orthodox church may not have gotten what it had hoped for, but he commends the church's efforts to make itself more relevant in today's society. "Our hierarchy can not just sit and think that because we are in theory an Orthodox majority country they can have their cup of coffee," Von Eggert says. As a national church, Russian Orthodoxy has never had to compete with other faiths, Von Eggert says. Until now. He says the fight for hearts and minds will make the church stronger. However Russian parents choose to teach religion to their children, it probably wont be through education in public schools.