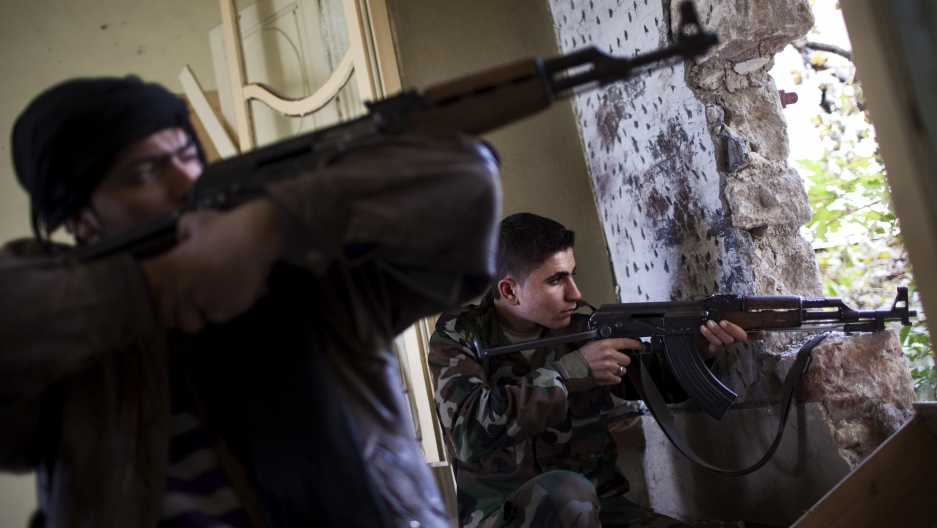 The US said in August that such a move by the Assad regime would constitute a "Red Line" and shift its military position. Obama amplified the warning again in early December when news of chemical weapons preparation came out of Syria.

Now it's clear even the American public considers it unacceptable: a Washington Post poll out last week states 63 percent of Americans support military involvement against Syria if chemical weapons are used.

All of which makes the most recent reports out of Homs even more concerning. While there is no official confirmation The Times of Israel reports at least six rebels are reported dead and 60 injured after opposition forces say "poison gas bombs" were dropped on the rebel held town of Homs.

There is video here on YouTube via Al Jazerra from “a field clinic in the city,” of exposed victims explaining and exhibiting their reported symptoms.

Activists also told Al Jazeera that scores of others were affected in al-Bayyada neighbourhood. Side effects reported include nausea, relaxed muscles,  by CouponDropDown">blurred vision, and breathing difficulties.

Residents said they did not know the nature of the gas sprayed.

"The situation is very difficult. We do not have enough facemasks. We don't know what this gas is but medics are saying it's something similar to Sarin gas," Raji Rahmet Rabbou, an activist in Homs, told Al Jazeera.

This Google+ page claims to have the names of those killed so far in the attack.

At 12:31 p.m. local time in Homs and 5:31 a.m. in New York, so far, it's only the Times of Israel reporting off of Al Jazeera. So again, there are no official confirmations of chemical attacks. Al Jazeera says it was a sprayed gas and The Times writes of gas bombs.

News from Haaretz is now out reporting it spoke to a Syrian activist who says government jet fighters dropped the "poisonous material" on Homs.

Iris Mentus at American Jihad Watch twitter stream posted the gas may be chlorine at about 7 p.m. yesterday evening. But again, it's supposition, the gas has not been identified. And attacks not officially confirmed.

The Chechen Center, a self-described "pro-Russian newspaper" also tweeted: "Parts of Syria are currently under chemical attack. Most reports seem to indicate chlorine attacks similar to those in Iraq in 2007."

It was that year Iraqi insurgents packed a truck with explosives and chlorine gas, before detonating it in southern Baghdad killing two people and sending 32 others to the hospital with chemical poisoning.

If it is chlorine, it should be easy to determine. It moves in a green cloud, has a strong odor and is water soluble. The last part is good news for anyone on the receiving end of chlorine because covering the nose and mouth with a wet cloth goes a long way to diminishing the danger. US Army manuals direct those exposed to chlorine to "Mask and Move"

While not the most lethal chemical weapon, chlorine's psychological effects following an attack are legendary. And for a rebel group already on the edge of exhaustion, hunger, cold, and despair there's no doubt that will be the case in Syria if the attacks are in fact genuine.