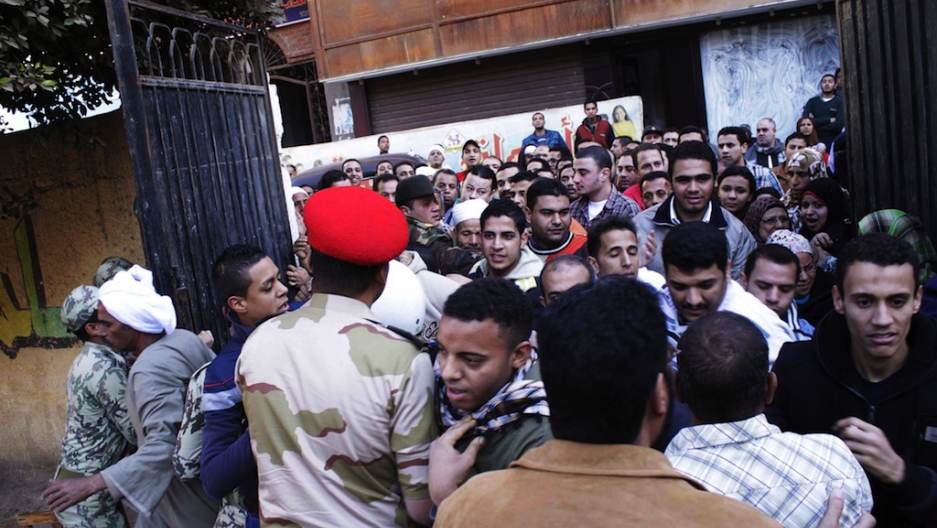 Egyptian voters scuffle with army soldiers as they enter a polling station in Giza, south of Cairo, on December 22, 2012. Egyptians voted in the final round of a referendum on a new constitution championed by President Mohamed Morsi and his Islamist allies, but with little prospect of the result quelling fierce protests.
Credit: Stringer
Share

CAIRO — Egyptians cast ballots yesterday in the second and final day of voting on an Islamist-backed draft constitution widely expected to gain passage, deepening already intense polarization between the Muslim Brotherhood and its liberal and secular opponents. If approved, the charter would serve as a milestone in a nearly two year-long democratic transition.

It would also set up a political showdown between Islamists and their opponents ahead of upcoming parliamentary elections.

The referendum followed weeks of sporadic clashes in the streets and over the airwaves, after an Islamist-dominated body authored the proposed constitution and rushed it through at the last minute. Supporters of the document say it would usher in stability as Egypt’s transition process drags on, while opponents say it gives Muslim clerics unprecedented powers and fails to ensure the rights of women and minorities.

While unofficial results from the first round of voting on Dec. 15 gave Islamists an historically small margin of victory — voters in 10 provinces voted 56 percent in favor — the 17 provinces that casted ballots yesterday included Islamist-heavy areas. Unofficial tallies that emerged overnight said overall approval for the constitution reached 64 percent.

Last week’s turnout was estimated at just over 30 percent, and turnout appeared to be low yesterday, too; over 25 million of Egypt’s 51 million voters were eligible to participate in the second round.

“I read the constitution and followed the process as it was being written,” said Mansour Ibrahim, 50, high school Arabic teacher voting in the working-class Cairo neighborhood of Imbaba. “It would give us more freedoms, and that is a good thing.”

Many Egyptians viewed yesterday’s poll as a referendum on President Mohamed Morsi and his Freedom and Justice Party, the Muslim Brotherhood’s political arm.

Randa Mohamed, 50, voted “no” in Dokki, an upper middle-class Cairo neighborhood. “I don’t approve of Morsi or the Brotherhood,” she said. “Anything that will create a war between Egyptians is bad.”

More from GlobalPost: Egypt's constitution: The good, the bad, and the ugly

One month ago, Morsi removed himself and the constitution-drafting body from judicial oversight amid fears that the courts would disband the latter. Liberals, Christians, and other non-Islamists backed out of the process, clashes erupted across the country, and the body quickly pushed through the constitution, which pulls heavily from the existing charter; Morsi eventually rescinded his new powers.

“Even if there are problems with certain articles, we’ll amend it in parliament,” said Magda Hamza Karam, a 61 year-old housewife from Dokki who voted for Morsi in this year’s presidential election. “Why stop now? Why vote no?”

Voting generally proceeded peacefully yesterday. Like last week, observers reported a variety of violations, ranging from Brotherhood members posing as judges and campaigning within polling stations, to judges showing up late, to intimidation against Christian voters. The elections commission signaled this week that it was unlikely to seriously investigate the charges.

The referendum was organized in just two weeks and required judicial oversight, but thousands of judges boycotted the vote as a protest against Morsi’s expanded powers. The government made due with fewer judges by spreading out polling over two days, and many violations likely resulted from bureaucratic bungling.

Voters breezed through a school-turned-poll in Imbaba, but at one Giza polling station, in the lower middle-class neighborhood of Haram, women waited in line for four hours as soldiers struggled to maintain order; a voter said two women fainted in a packed classroom.

“The process is very organized,” said Karam, the housewife, as a woman behind her in line interrupted: “—except for the cheating!”

But Nawal Mohamed Abdelaziz, 42, a Muslim woman from Imbaba wearing a face veil, said it was the constitution text itself and the political elites who wrote it who were creating divisions by failing to protect religious minorities, including Christians, who make up 10 percent of Egypt’s population. Religious protection should even extend beyond the three Abrahamic religions, said Abdelaziz, who voted “no.”

“If someone worships fire, why is it my business?" she asked.

The divisive nature of the vote will leave many Egyptians doubting the constitution’s legitimacy, according to Mazen Hassan, an associate professor of political science at Cairo University.

“I do not see the crisis solved anytime soon as long as the two opposing camps refuse to compromise,” he said.

More from GlobalPost: Egypt votes in second phase of referendum

If the charter passes, the upper house of parliament would assume legislative powers from Morsi and parliamentary elections would have to take place within 60 days, extending the fight between Islamists and liberals, leftists, and secularists. The Brotherhood’s political machine still holds the upper hand over non-Islamists who have been slow to connect with poorer, more rural Egyptians, according to Mostafa-Elwi Saif, a political science professor at Cairo University and former member of the upper house of parliament.

The majority of registered voters were expected to stay home yesterday despite the government declaring the day a public holiday.

Sameh Samir, 35, chose to man his vegetable stand near the polling station in Haram, preferring to make an income instead of traveling far to Upper Egypt, where he is registered to vote.

“It wouldn’t make any difference if I went,” he said. “The constitution’s going to pass anyway.”