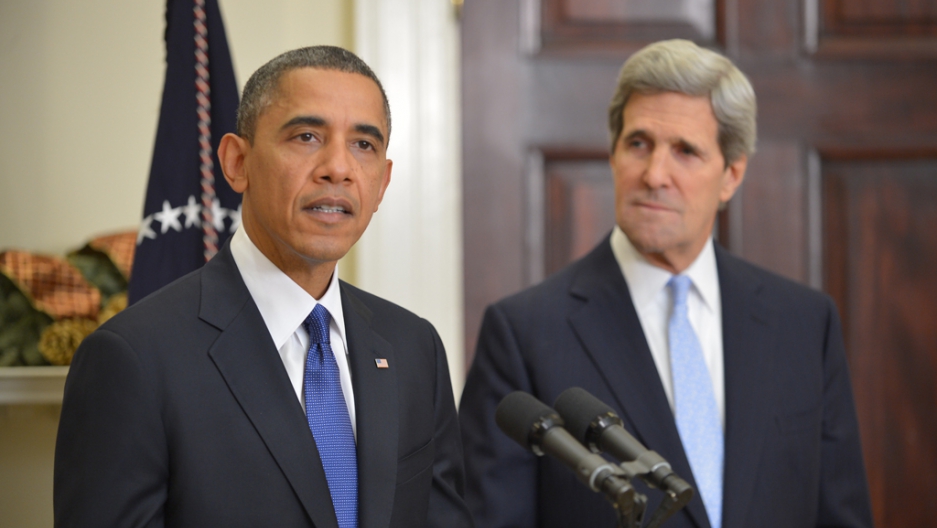 US President Barack Obama announces US Senator John Kerry as his choice for the next secretary of state on December 21, 2012 in the Roosevelt Room of the White House in Washington, DC.
Credit: MANDEL NGAN
Share

President Barack Obama officially named Sen. John Kerry as his pick for secretary of state during his second term.

Obama said on Friday that Kerry's entire life "has prepared him for this role."

"As we turn the page on a decade of war, he understands that we’ve got to harness all elements of American power and ensure that they’re working together," Obama said, with Kerry by his side. "John’s earned the respect and confidence of leaders around the world. He is not going to need a lot of on the job training."

Kerry will be replacing Secretary of State Hillary Clinton, once his nomination is confirmed by the Senate. Clinton, who is still recovering from a bout of illness and a concussion, was not at the announcement.

Republicans in the Senate have indicated that Kerry's confirmation process would be smooth, unlike the path for another potential nominee, United Nations Ambassador Susan Rice, Politico noted.

A senior administration official had leaked the news to The New York Times earlier in the day.

The AP also reported the news, saying earlier Friday morning that the president was expected to nominate Kerry this afternoon.

Vice President Joe Biden seemed to play on the wide anticipation of the choice when he entered the room before Obama's announcement, accompanied by Kerry's wife Teresa, and joked to the press corps that he was announcing her as his nominee for secretary of state.

Kerry's replacement as head of the Senate Foreign Relations Committee will be Sen. Robert Menendez of New Jersey, reported the Chicago Sun-Times.

Earlier this month, UN Ambassador Susan Rice — considered to be a frontrunner for the secretary of state post — withdrew her name from the list of candidates to take over from Hillary Clinton.

Senate Republicans had criticized Rice for comments she made after the Sept. 11 attack on the US consulate in Benghazi, Libya, which she referenced in her withdrawal letter to Obama.

"If nominated, I am now convinced that the confirmation process would be lengthy, disruptive and costly — to you and to our most pressing national and international priorities," she said Thursday night, The Telegraph reported.

Obama accepted Rice's resignation and said he deeply regretted what he called "unfair and misleading attacks" over her response to the crisis in Benghazi.

Kerry had previously played a large role in Obama's political life when he chose then-Illinois legislator Obama, seeking a seat in the Senate, to give the keynote address at the 2004 Democratic Convention, USA Today said. Many consider that speech to have launched Obama's national political career.