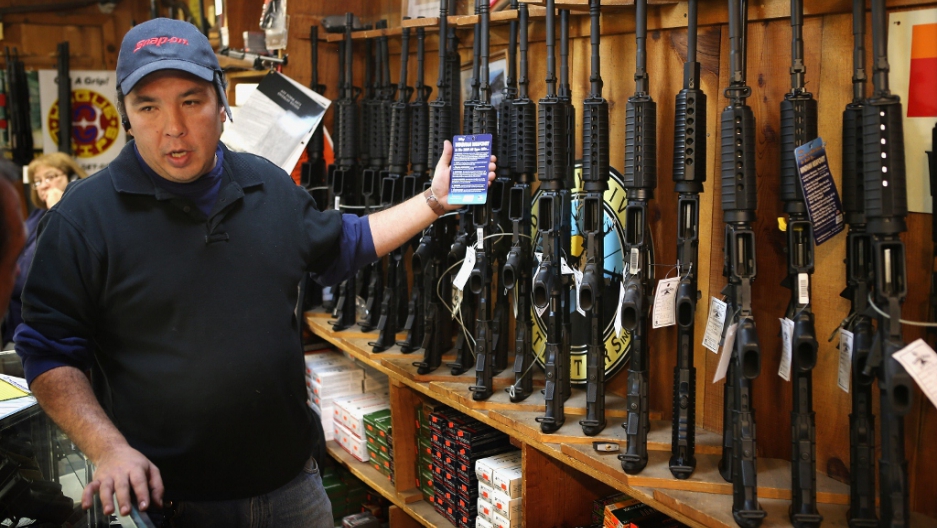 At Freedom Firearms in Fort Wayne, Ind., there is hardly anything left in the store. Managing partner Angie Freeland told CNBC sales have "gone through the roof." With little left to sell, she will probably close for what is typically her busiest day of the year, Dec. 24.

"It started on Monday with the AR-15s going out the door," she said. "Once those were gone they were buying anything with a high capacity magazine."

The rush to buy guns comes in the wake of last Friday's massacre in Newtown, Conn. Twenty-year-old Adam Lanza shot 20 children between the ages of 6 and 7, and six adults at Sandy Hook Elementary School. He killed them all with a semi-automatic rifle made by Bushmaster called the AR-15, before killing himself with a handgun.

The shootings triggered both a wave of anti-gun talk and a wave of buying by gun owners and enthusiasts. President Obama appointed Vice President Joe Biden to lead a gun violence task force. The group's charge is to present to the President by the end of January the best ideas to reduce gun violence. It is a charge that has many fearing a ban on owning some, if not all, guns.

"Talk of banning the weapons is driving sales," said Jeff Dillard, co-owner of the National Armory Gun Store & Range in Pompano Beach, Fla. "It's an incredible knee jerk reaction to what the president said. He put Biden in charge of it and they [politicians] will go crazy like they usually do. So customers want to get weapons before a ban is put in place."

Dillard called sales in the four days "incredible." On Wednesday he said the store did four times the sales volume it did on the same day last year. "The expensive guns went first, then the middle of the road guns went next," he said. "The cheap, less expensive guns will probably go today."

It is not only guns that are people are buying up, it is ammunition too.

"I've sold more bulk ammo [1000 rounds] in the last three business days than I have all year," said Henry Parro co-owner of Parro's Gun Shop and Police Supplies in Waterbury, Vt. "Customers are using their hand carts to load their cars."

Parro said with Biden in charge of the gun violence task force, his clients sees the handwriting on the wall and they are deciding to exercise their right and buy guns now. As a senator, Biden steered a now expired ban on assault weapons through Congress, and has been a long-time supporter for stricter gun laws.

The year-end surge in sales comes at the end of what gun retailers describe as a very strong year. Fears the re-election of President Obama would result in stricter gun laws drove those numbers for the first eleven months of 2011. Now the December surge could be halted by a lack of supply. Parro said he is low on inventory but cannot get through to his distributors, and Freedom Firearm's Freeland said the seven or eight distributors she deals with around the country, are all out of inventory.

For the last month Jerry McCall has hung a sign outside his store, Texas Guns, in San Antonio, Texas reading "Get Your AKs and ARs before the ban." The sign referrs to the assault rifle the AK-47, and the AR-15, and his belief that a re-elected Obama would prevent future purchases of them. McCall said he has sold everything on his wall, along with all his ARs and AKs in stock. He said the twelve distributors who supply him with these guns are out of stock too.

"Just remember one thing, " he said, referring to his clients, "These are good honest American citizens."

He said they are worried about being able to defend themselves and their homes. He said the government's talk of a new gun controls has created a kind of hysteria among buyers.

It is not only an end to the current era of gun rights causing people to buy firearms. Mike Wastler, a manager at Barts Sports in Glen Burnie, Md., told CNBC there is another segment of recent buyers who fear the world is coming to an end.

"Two ladies told me ten days ago, 'God told them we do not have until the end of the year,'" he said. "These are soccer moms driving minivans!"

He said in the gun business you have to assess people quickly because "you do not want a fruitcake buying a gun." He said people who are concerned the world is coming to an end are part of the 20 percent to 25 percent of his clientele buying to guns for defense if the economy crashes — and if their homes and families are targeted by robbers.

"These are educated people," he said, and these days they are a growing segment of his customer base.