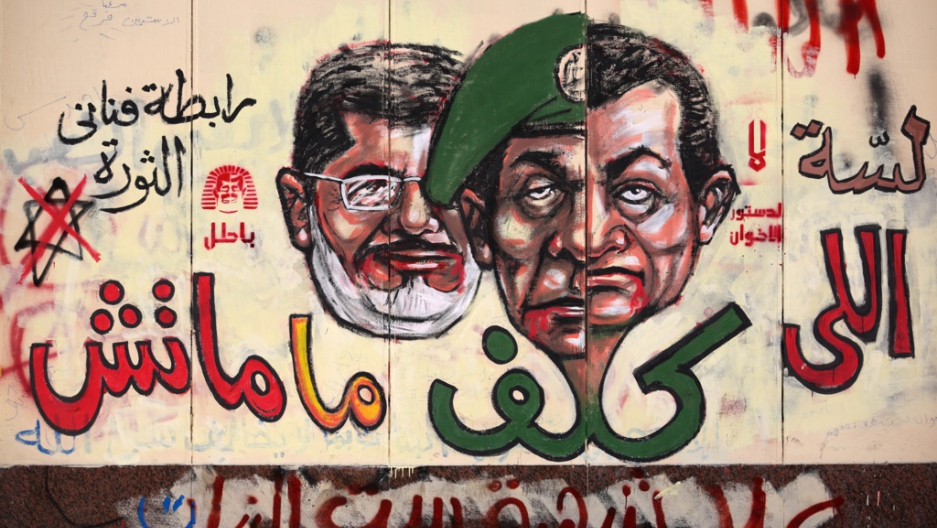 CAIRO, Egypt – Egyptian President Mohamed Morsi might be the most enigmatic man in the Middle East.

At once, he is both Egypt’s first-ever democratically elected leader and a divisive figure with unprecedented powers. He swiftly ended, in one simple stroke in August, six decades of military rule. And has since plunged the country into its deepest political crisis in years.

As an energetic, street-led opposition forms against Morsi’s recent moves — including a decree that granted him wide authority, and the hurried passage of a controversial draft constitution — the former Muslim Brotherhood leader has lurched through the crisis with a series of mercurial and sometimes contradictory statements that have done little to temper the unrest.

His erratic leadership style, heavily influenced by the Brotherhood, is now in the spotlight as the future of Egypt hangs in the balance.

“Morsi is a real leader, not a dictator,” said Ibrahim Al Iraqi, a leader of the Brotherhood and its political arm, the Freedom and Justice Party (FJP), in a province near Cairo. “He doesn’t take decisions easily — he is a man who studies things carefully. A scientific man.”

Born to a family of farmers in a conservative village in the Nile Delta in 1951, Morsi was awarded with an Egyptian government scholarship to study material engineering at the University of Southern California in Los Angeles in 1978.

It is there that he earned his PhD, moving on to teach at California State University, Northridge. But later, he said he found American culture to be immoral and in decline. And by the time he returned to Egypt in the mid-1980s, he was already dedicated to the Brotherhood, itself undergoing a revival after years of repression and arrests.

Morsi — who also served at the time as the dean of the faculty of engineering at Egypt’s Zagazig University — then built a reputation for himself as a devoted and ideologically rigid Brotherhood operative, according to the organization’s members and academics that study the movement.

He favored a more conservative agenda for the secretive, decades-old Islamist movement, and saw internal dissent as damaging to the cause.

“For much of the past decade, Morsi has been a behind-the-scenes player,” Eric Trager, a fellow and Egypt observer at the Washington Institute for Near East Policy, wrote in a column in The New Republic in April. He performed key functions “that were vital to the Brotherhood’s external security and internal discipline,” including negotiating with the regime of former president, Hosni Mubarak.

Morsi’s loyalty and competence paid off, landing him a spot as chairman of the movement’s fledging political party, formed in the wake of the 2011 uprising. And when the Freedom and Justice Party’s first pick for the presidency, Brotherhood heavyweight Khairet Al Shater, was disqualified from the race at the last minute, Morsi was nominated to lead the ticket.

“He was definitely one of the best and easiest FJP leaders to deal with,” said another party leader in the South Sinai province, Abdullah Desouqi. Desouqi said he worked long hours with Morsi in helping build the party, and that the 61-year-old engineer was meticulous and disciplined.

“He likes to get the opinion of others. Even when he laid carpet at the new party headquarters, he wanted everyone’s opinion,” he said.

But for all his patience and control as a party member, the stout, grizzly-bearded Islamist — whom some detractors have dubbed as the Brotherhood’s “spare tire” candidate — has governed unpredictably.

So far, a mixture of both popular and unpopular moves has punctuated his five-month-long tenure. He ordered the release of all political prisoners imprisoned since the January 2011 uprising, but later cracked down on the press, supporting lawsuits against media figures for “insulting the president.”

Early on, he moved to reinstate the Brotherhood-led parliament that was dissolved by Egypt’s erstwhile military rulers. He backed down, only to sack the army generals in a masterful countercoup a month later.

He usurped the military’s legislative powers, prompting some critics to warn of an impending dictatorship.

When in November, Morsi announced his edicts were above the law, a move aimed at sidelining a judiciary the Brotherhood says is hostile to their rule, it proved too much for an opposition that battled the previous authoritarian regime in a fight for freedom.

Morsi later retracted large parts of his decree after weeks of protests, but pushed ahead with a constitutional referendum, the end of which will be held Dec. 22. The constitution lacks the backing of key secular and church groups who were not present at the constituent assembly vote to ratify the document last month.

But some critics say Morsi is not in a position to back down independently from his policy provisions. He is still beholden to the Brotherhood’s Supreme Guidance Council, they say, which is bent on consolidating the organization’s political power.

“Morsi is a worker bee, not a leader,” said Cairo-based writer and longtime activist, Hisham Kassem. “He is a puppet of the Supreme Guidance Council.”

Desouqi admits that the council, which has 15 members who act as the movement’s executive branch, influences the president’s decisions.

“There are four main advisers [to Morsi] from our party, and these advisers go to the Supreme Council for guidance on how to advise him,” Desouqi said.

Shadi Hamid, the director of research at the Brookings Doha Center, a think tank, is a longtime Brotherhood watcher.

“Does it matter what Morsi thinks?” he wrote in Foreign Policy in June. “The Brotherhood’s presidential campaign was never about Morsi […] It was about the Brotherhood.”

“This is what makes it difficult to assess a Morsi presidency,” he wrote.