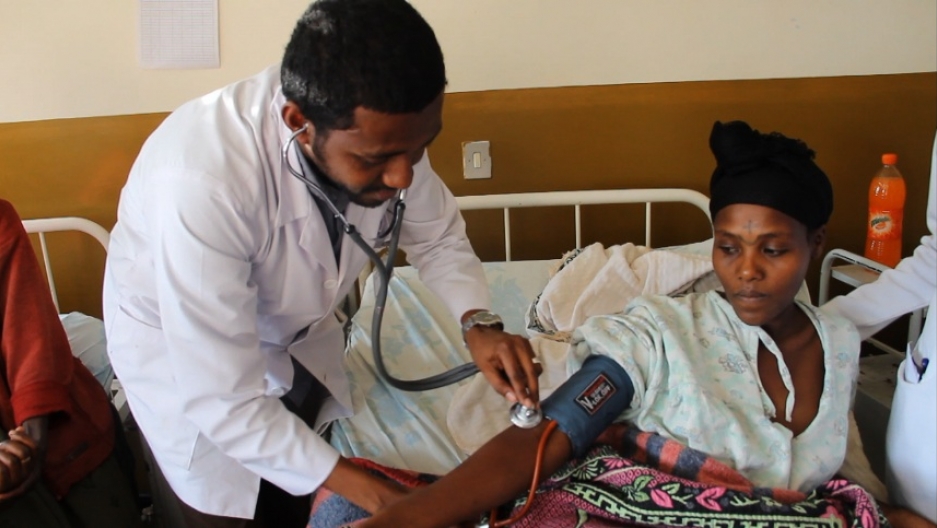 The pediatrics wing of St. Paul’s Hospital in Addis Ababa is a busy place. Nervous parents move in and out, waiting for their kids to be seen.

There aren’t a lot of doctors here, but there is one group of people that seems to be everywhere: young, white-coated medical students.

Until recently, Ethiopia had just one physician for every 100,000 people, but now the country is dramatically increasing the number of doctors it produces.

This year, the government opened 13 new medical schools, which more than doubled the number in the country. Ethiopia has also been increasing enrollment at existing schools.

“This year, for the first time, we enrolled 3,100 medical students, which is almost tenfold compared to what we used to enroll five, six years ago,” says Dr. Tedros Adhanom, Ethiopia’s foreign minister, who until recently served as minister of health.

Tedros says Ethiopia’s severe physician shortage is one of the country’s most pressing concerns.

Many doctors leave Ethiopia for higher-paying jobs overseas, and those who stay tend to work in the cities and in the private sector. That means the 85 percent of Ethiopians who live in rural villages may never see a doctor.

Tedros says the government’s solution is to deliberately overproduce doctors and flood the country with new physicians. “Even if you lose 100 or 200, everybody doesn’t migrate,” he says.

But some say this huge increase in the quantity of doctors is compromising quality.

Dame Endalew, a medical student at St. Paul’s, says the sharp increase in enrollment has made it difficult to learn.

“There’s a scarcity of resources,” Dame says. “We don’t have books, computer labs, lecturers. Every time the number of students increases, these things become worsened.”

Dame says he often can’t complete assignments because all of the books and computers are in use. He had to share a cadaver with 30 peers. And he often interviews patients who have already seen 10 or 15 other medical students.

“When you try to work with them, they are really fed up with the students asking the same question again and again,” he says.

But perhaps the biggest problem at Ethiopian medical schools is a shortage of instructors.

There are very few incentives for senior doctors to teach at medical schools. That means young doctors like Daniel Hailemariam, a professor of public health at the University of Addis Ababa, are asked to step in.

“I just graduated in July, and I’m currently enrolled as a faculty there,” he says, though he has never worked in the public health sector.

At Ethiopia’s 13 new medical schools there is also a shortage of professors, so recent graduates are often asked to teach. Some say that could cause big problems down the road.

One foreign doctor, who has worked in Ethiopia for more than 20 years, but asked not to be identified, said these new schools are producing a generation of doctors who don’t know what they’re doing, and they could do more harm than good.

Dr. Tedros Adhanom, Ethiopia’s former minister of health, agrees that physician quality is a concern, but he insists that Ethiopian schools will meet a minimum standard for medical education. And he says that’s good enough for now.

“I don’t think we will change this country by waiting until we get something perfect to start something,” Tedros says. “It cannot be perfect. We have to start with what we have.”