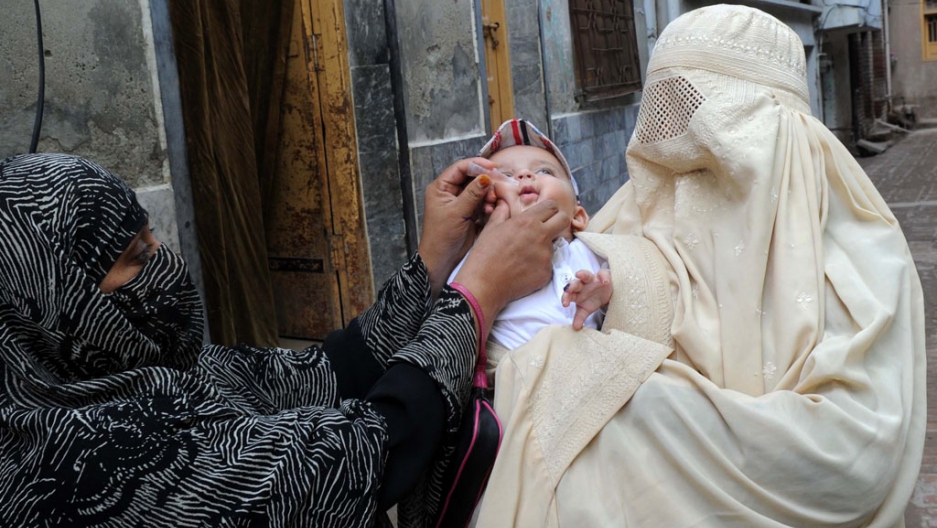 KARACHI, Pakistan — Three more health-care workers were killed Wednesday in renewed attacks against those trying to immunize Pakistani children against polio, bringing the total killed this week to nine.

The attacks Wednesday occurred near Peshawar, killing a female health worker and her driver as well as a third worker in a separate incident, Al Jazeera reported. The World Health Organization and the United Nations have both suspended their campaigns in the country because of the violence.

Reuters reported United Nations spokesman Michael Coleman said the organization has pulled "all staff involved in the campaign off the streets" in Pakistan.

The government said immunization would continue without the UN but many workers refused to go out in the field, Reuters said.

On Monday and Tuesday, six workers died in the first of what many suspect are Taliban attacks, CNN reported.

The Taliban announced this year that it opposes polio vaccinations if the West is involved.

The Taliban issued its decree because the CIA, during its hunt for Osama bin Laden in 2011, collected DNA samples under the guise of polio vaccinations, CNN reported.

Aside from that, Islamist extremists in Pakistan claim that polio vaccines are part of a US conspiracy to render the people of Pakistan infertile, pointing to foreign NGOs that support polio eradication campaigns while also promoting reproductive health programs in the country.

Polio is a highly infectious disease that cripples its victims very quickly, sometimes within hours. It's an all but eliminated disease everywhere in the world except Pakistan, Afghanistan and Nigeria, where it remains endemic. The eradication efforts underway in Pakistan this week involved 200,000 workers trying to immunize 30 million Pakistani children, Al Jazeera reported.

More from GlobalPost: Can the world beat polio?

On Wednesday at Karachi's Agha Khan University Hospital, one of the country's best medical institutions, nurses and doctors pointed to Karachi's large Pashtun population as one of the causes for the growing polio crisis.

Pashtuns account for 75 percent of Pakistan's polio cases, and according to a recent report by the World Health Organization, polio in Pakistan will never be eradicated unless workers can convince the Pashtun elders that accepting the vaccine is in their best interest. The WHO says that only 2 percent of Pakistan's population is considered high-risk for contracting the disease because of religious objections to the vaccine; and that refusal presents a larger risk to public health.

"It's difficult when someone has specifically said that this is medicine that is completely banned by your religion," said Nosheen Fakhir, a nurse in the pediatric ward of AKU. "These are essentially illiterate people who have no way of knowing what is true and what's not."

Another nurse, Habiba Ahsan, agreed. "Fact is, a lot of the religious leaders and elders in the neighborhood also have been told that the eradication is just a front for population control. Now with the CIA's meddling in the vaccine efforts, people are much more suspicious."

Fakhir explained that rich parents in the city are also disdainful of the vaccine's benefits. "These people, though — we can give them literature by WHO and the UN, and they sometimes understand. The poor people, on the other hand, don't have any means to understand how bad the disease can be for their children."

Hospitals like AKU have attempted to recruit Pashtuns into their community health programs to increase the likelihood of success. Their efforts have included asking religious clerics to issue fatwas encouraging people to get vaccinated, making videos of village elders acknowledging the vaccine's benefits, and using people in the communities who have already been vaccinated to spread the work. However, resistance has grown since news that the CIA had used polio vaccines as a front for its pursuit of bin Laden.

Many community health workers who work in Pakistan's poorer neighborhoods spoke out over the attacks Wednesday.

“We go out and risk our lives to save other people’s children from being permanently handicapped, for what? So that our own children become orphans?” Ambreen Bibi told Reuters in Islamabad.