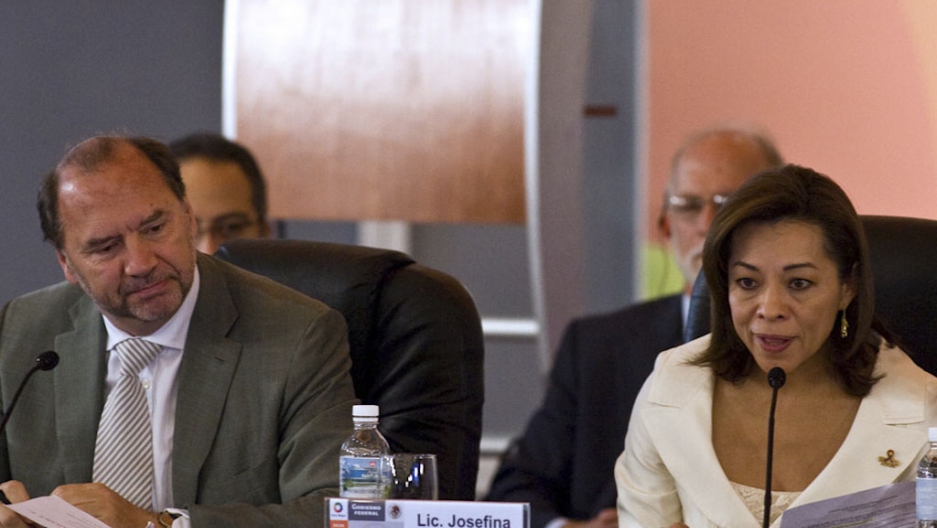 Mexico's Minister of Public Education Josefina Vazquez (R) speaks next to Peter Piot, Executive Director of ONUAIDS, during the inaguration of the Meeting of Health and Education to stop HIV/AIDS in Latin America and the Caribbean, in Mexico City on August 1, 2008.
Credit: Ronaldo Schemidt
Share

At the 2008 International AIDS Conference in Mexico City, the Ministers of Health and Education from Latin America and the Caribbean promised to increase young people’s access to sexuality education and reproductive health services. The international community celebrated the historic signing of the Ministerial Declaration, "Preventing through Education," as a key instrument in combating HIV/AIDS in the region. But four years later, the ministries have failed to uphold their promise.

Armed with information, creativity, and passion, Latin American and Caribbean youth advocates are trying to change that. They are holding governments accountable for their commitments and aim move the Ministerial Declaration forward. To help achieve this goal, Demysex and the International Planned Parenthood Federation/Western Hemisphere Region (IPPF/WHR) have rallied more than 40 organizations to form a regional advocacy initiative: the Mesoamerican Coalition for Comprehensive Sexuality Education.

The lack of comprehensive sexuality education and access to youth-friendly services has proven devastating. Young people are at the center of the global HIV/AIDS epidemic, comprising 40 percent of new infections, according to the United Nations Population Fund (UNFPA). More than 160 million young people live in Latin America and the Caribbean, and UNICEF statistics report that 68,000 of them are living with HIV/AIDS.

“Young people have the right to make informed decisions about our bodies and the ways we express our sexuality,” said Erick Monterrosas, evaluation officer at Demysex in Mexico. “Comprehensive sexuality education means our generation will not be condemned to ignorance, discrimination, HIV infection, and unwanted pregnancies.”

More from GlobalPost: Op-Ed: Empowering Youth to own their futures

In 2010 and 2011, the Mesoamerican Coalition evaluated the region’s progress toward reaching the Ministerial Declaration’s goals in 17 Latin American and Caribbean countries. With just two years until the target date for full implementation, the evaluation revealed that the region is only halfway to achieving the Declaration’s aims.

In Latin America, a region with huge disparity between rich and poor,adolescents’ inability to access sexual health information and services is a matter of economics. The UN Development Program reports that income inequality has grown in Latin America and the Caribbean over the last 15 years, and the region's youth feels the greatest impact. Comprehensive sexuality education empowers young people with the tools they need to control their own economic futures and develop secure, sustainable economies.

“Youth advocates aren’t just demanding the fulfillment of the promises made by the Ministerial Declaration,” said Flor Hunt, IPPF/WHR’s regional advocacy officer. “They’re creating a better future for all young people in the region.”

“From Mexico to Chile, we are in the streets and squares and on the web,” said Monterrosas. “We are asking our government leaders: What happened to your promise?”

There are signs that the youth advocates’ strategy is working. Between 2010 and 2011, the level of progress toward meeting the goals of the Ministerial Declaration increased by 13 percent. In Guatemala, youth advocates scored another victory. Asociación Pro-bienestar de la Familia de Guatemala (APROFAM) engaged in direct dialogue with government officials. As a result, in 2011, the government launched a comprehensive sexuality education program in nine departments of the country and has created an agency to monitor the progress.

The youth advocates’ work is about more than just securing legislative victories and gaining access to information and services. It is about fundamentally changing the relationship between government, civil society, and young people in Latin America and the Caribbean.

Mia Mazer is a reproductive health advocate and a recent graduate of the University of Michigan. She works as the media and communications intern at International Planned Parenthood Federation/Western Hemisphere Region (IPPF/WHR).

More from GlobalPost: In AIDS fight, is it the beginning of the end?