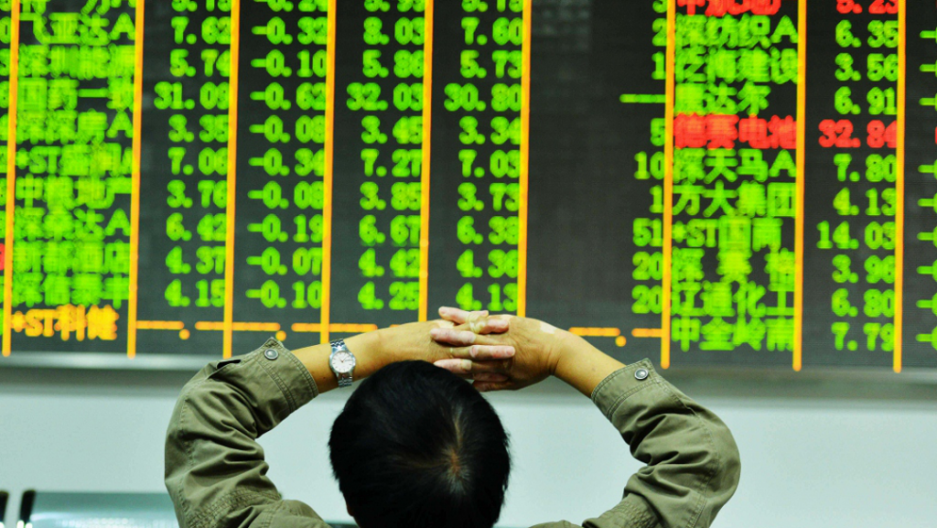 An investor stares at the screen Nov. 27, 2012 in Hangzhou Province, China.
Share

China, already struggling with a slowing economy, may now be facing the type of credit crunch that helped derail the US economy four years ago.

Among the all-too-familiar ingredients: supposedly risk-free — yet high-yield — investments, off-balance-sheet transactions, little if any disclosure and investors who don't ask a lot of questions.

All this has one Wall Street analyst warning that China is "a step closer to a potential credit event in the shadow banking sector."

The security in this case is known as a Wealth Management Product, which has grown wildly popular in China over the last few years.

Investors choose WMPs over traditional savings accounts or certificates of deposit because they offer higher yields. The rate on a benchmark one-year CD maxes out at 3.3 percent, while the average interest rate on WMPs is closer to 4 percent, with the riskier ones promising double digit returns.

WMPs are mostly short term securities, with some having a duration of just a few weeks. The underlying asset they are investing in can be anything from very safe corporate bonds to speculative real-estate developments and long-term infrastructure projects.

However, in an investigation done by Reuters earlier this year, the vast majority of WMPs they examined didn't disclose what the money would be used for.

What triggered all the worries is the recent default of a WMP that invested in a pawn shop, two car dealers and an entertainment venue. Sold by a bank in Shanghai in November of 2011, the security promised a return as high as 13 percent in just one year.

Instead, investors learned on Nov. 25 they'd lost everything — a total of $22.5 million. In early December, they protested daily in front of the bank, making headlines across China.

"As far as we are aware, this is the first (widely publicized) case that investors have lost principal in a WMP," wrote David Cui of Merrill Lynch, and "we believe the outcome of this case could become a watershed event for the WMP market."

The worst case scenario says Donald Straszheim, head of China research at ISI group "is a run on WMPs which could become large and destabilizing."

If investors stop buying WMPs, a huge source of credit dries up for small and medium sized businesses , a major blow to a Chinese economy already struggling with slow growth. Alternatively, depending on the actions of regulators, it could be a huge risk to banks' balance sheets, leading to solvency issues in the Chinese financial system.

In a note warning about the risks of the WMPs to the financial system, Fitch Ratings says there may be 13 Trillion Yuan (just over $2 trillion) of WMPs in the system by the end of 2012, equaling 16 percent of commercial deposits in the country.

They estimate that as half much as half of all new deposit growth in China is now being generated through the sale of WMPs, and finish the note saying "there is clearly cause for concern."

There are two types of WMPs — those that are issued by banks, and those where the bank only acts as the selling agent on behalf of another institution.

It's clear from the drama unfolding over the defaulted WMP, the investors thought they had bought something that was guaranteed.

Chinese newspapers quote some of the investors, who claim they were told the bank's president and his sister were investing in this product, that it was "risk free."

The bank, Huaxia, has said they did not issue this security, and that it was sold by a rogue employee who now remains in police detention, hence they do not bear any financial responsibility.

There is an investigation under way by Chinese regulators as to whether or not the bank should bear some of the financial responsibility, regardless of what the documents state.

If they force the bank to cover the losses, this could shore up confidence in the products and prevent a run on other WMPs. However, it would raise another, perhaps even bigger problem.

If the regulators insist the bank covers the losses, it sets "a very expensive precedent" says Straszheim. It would cause force the banks to shifts those products onto their balance sheets, and expose them to potentially large liabilities if there are widespread defaults. Straszheim says "I think the regulator would be careful about stepping over that line."

Will the worst come to pass? Straszheim doesn't think so. "I am optimist that they can get through this, but it's time they create a more modern structure."

Many people have raised red flags about the situation, from reporters and ratings agencies, to Wall Street analysts and bankers. In fact, just this past October the chairman of the Bank of China, Xiao Gang, wrote an op-ed critical of the WMPs in the China Daily.

"Many assets underlying the products are dependent on some empty real estate property or long-term infrastructure, and are sometimes even linked to high-risk projects, which may find it impossible to generate sufficient cash-flow to meet repayment obligations." In other words, the products will default.

Another key risk he highlighted, that WMPs are short term funding being used for what are often long-term projects, "and in such situations there is a possibility of a liquidity crisis being triggered if the markets were abruptly squeezed."

In other words, if investors stop buying WMPs, a long-term construction product for example may find itself without any working capital because they can no longer sell short-term debt.

This is essentially what happened to Bear Sterns which was funding its business on a daily basis by borrowing on the overnight market. One morning they couldn't borrow anymore and were pushed into the arms of JPMorgan.

Finally, writes Xiao, many of the new WMPs may be issued just to cover older, maturing WMPs. "To some extent, this is fundamentally a Ponzi scheme."