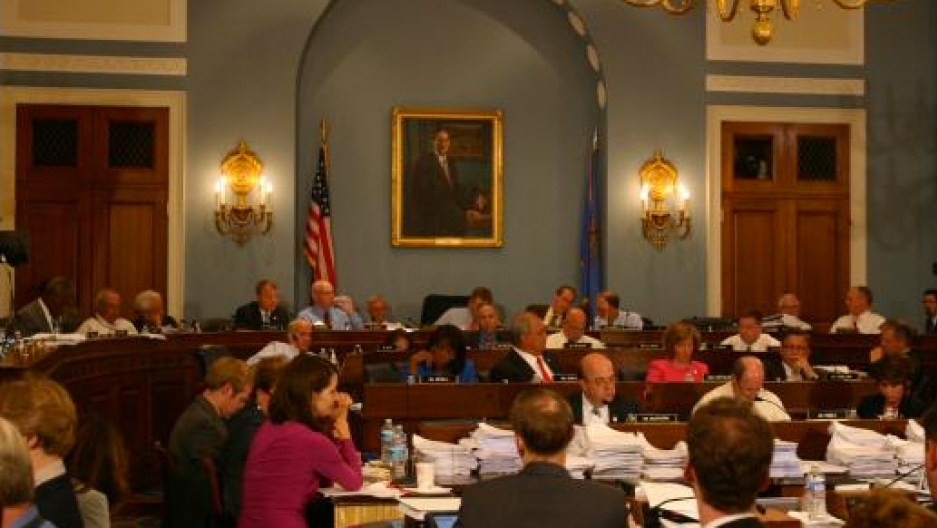 The U.S House of Representatives Committee on Agriculture meets recently. (Photo courtesy of the U.S. Congress.)

Congress and the White House are scrambling to find savings big enough to avert the broad cuts mandated by Congress, known as the fiscal cliff.

Substantial savings could be extracted from the so-called Farm Bill, as both the House and Senate agriculture committees have proposed legislation that say would save billions for the federal budget. But critics on the left and right say it would cost more than it would save.

Faber, vice president of governmental affairs, calls the farm bill one of the most important influencers on not just what we eat, but how much we pay for it as well.

"The farm bill is a trillion dollar bill that not only provides subsidies to farmers, but also provides conservation payments to farmers that are offering to help save the environment," he said. "It helps feed the hungry, it invests in research, renewable energy, it will cost more than the Affordable Care Act over 10 years."

Faber reserves special criticism for the House version of the bill.

"The House measure is just one of the worst pieces of farm and food legislation in decades," he said.

It cuts food stamps and funding for environmental programs, and uses those savings to provide more subsidies for farm businesses, he said, at a time when farmers are enjoying record incomes and seeing the value of their land skyrocket.

So far, the House version of the bill has remained stuck in committee, in part because House leaders aren't sure the polarizing bill would get enough votes to pass. There are proposals that would see the bill wrapped up in a broader, budget balancing bill, which would potentially limit debate on the bill's many components. Faber said that can't be allowed to happen.

"It kind of boggles the mind that we’d put a bill to commit the government to spending a trillion dollars into another piece of legislation that’s ostensibly designed to right the nation’s finances, but that’s exactly what some are proposing," he said.

The Senate bill isn't as bad, Faber said, but he was still critical. It cuts food stamps and conservation subsidies, though less than in the House proposal.

The Senate bill shaves about $23 billion from the federal budget deficit, while the House version cuts about $35 billion.

"Unfortunately almost half of the savings in the House bill come from cutting food stamps or from what’s now called the Supplemental Nutrition and Food Program," Faber said. "The savings that are predicted are really an illusion because of the ways they’ve designed the new subsidy programs. ... They’ve included some price guarantees for the major commodity crops like corn, soy beans, wheat, cotton, rice and so on, that may not appear to cost much according to the Congressional budget office, but could cost the taxpayers tens of billions, even hundreds of billions of dollars, over the next ten years."

Faber says the long-term costs to taxpayers will be far beyond what the Congressional Budget Office is estimating.

Both bills also greatly reduce funding for conservation programs. Faber says this is the worst time to do that. In the last four years, more than 23 million acres, an area the size of Indiana, have been converted to produce corn and other crops.

"To cut those programs, the only safety net we have for the environment, is really disappointing," Faber said.

Faber says his group has reached across the partisan divide and worked with several conservative groups, including the Heritage Foundation, American Enterprise Institute and Americans for Prosperity, in opposition to these agricultural bills.

"(They) believe that there are significantly more savings to be found if we really reform farm subsidy programs," Faber said. "Especially in light of the fact that the household income of a real farm, a large commercial farm, is well above $200,000 a year."

Faber would like to see those top earners pay higher taxes as part of incentive reform.