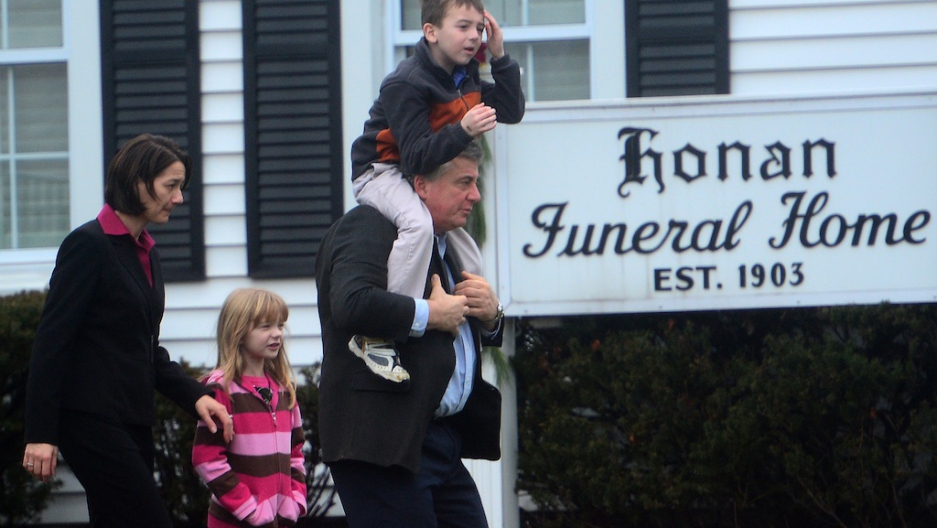 Mourners leave the Honan Funeral Home today after attending a service for Jack Pinto, one of the victims of Friday's mass shooting.
Share

Newtown in Connecticut today began the dreadful process of burying the dozens of victims of one of the worst mass shootings in US history.

The bodies of Jack Pinto and Noah Pozner, both aged six, were laid to rest in the first of many funerals to be held in the grief-stricken town, the Associated Press reported.

The two boys were among the youngest killed in their classrooms at Sandy Hook elementary school on Friday.

In all, 28 people died in the deadly rampage, including 20 children, six teachers, the shooter Adam Lanza and his mother, Nancy, whom he shot dead before going to the school.

Newtown's schools remained closed today, Reuters reported, as the families, friends and townspeople struggled to come to terms with the tragedy. Sandy Hook is likely to remain closed forever.

Outside the funeral home where a service was held for Noah, “well-wishers placed two teddy bears, white flowers and and a single red rose at the base of a maple tree,” the AP said.

The boy’s family had moved to Connecticut from Brooklyn for the “quality and security of its schools,” his uncle was quoted by The Guardian as saying.

Noah’s twin sister, Arielle, was also at the school during Friday’s shooting but was in a different classroom and survived, CBS News reported.

Jack was a big New York Giants fan and might be buried in wide receiver’ Victor Cruz’s jersey.

The funerals came a day after President Barack Obama arrived in Newtown to console the grieving families, friends and townspeople. Obama pledged to seek change in memory of the victims.

‘What choice do we have?’’ he said. ‘‘Are we really prepared to say that we’re powerless in the face of such carnage, that the politics are too hard?’’