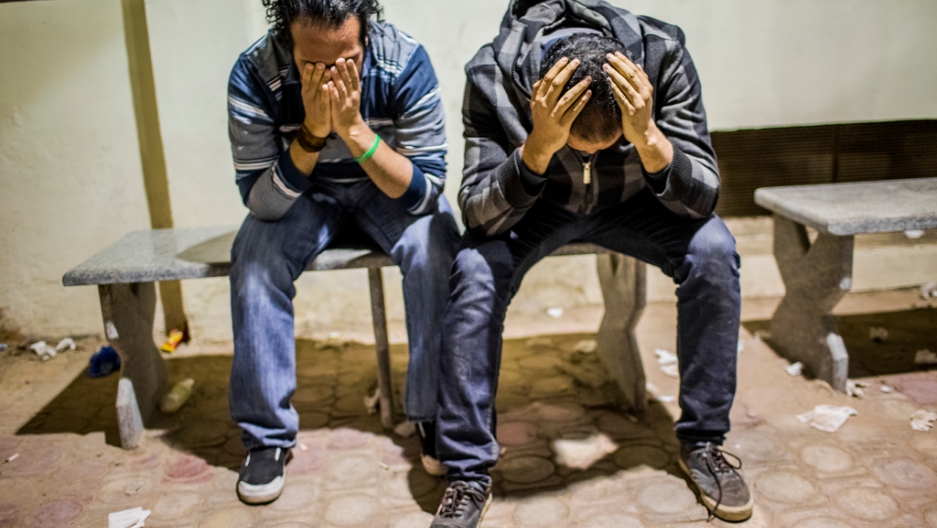 Friends of killed journalist El-Hosseiny Abou-Deif after his body was carried out from a morgue on Dec. 12, 2012 in Cairo, Egypt. Economic instability and political upheaval have made happiness hard to come by for all Egyptians.
Credit: Daniel Berehulak
Share

CAIRO, Egypt — GlobalPost set off across the Egyptian capital in a quest to find happy people. We searched high and low for residents who lived outside the world of poverty and who were unfazed by the country’s political turmoil.

Maybe there’s a couple ecstatic about an impending marriage, we thought. Or perhaps a fresh graduate who just landed the job of her dreams. The birth of a new child is sure to bring joy, or an artist could be thriving in the vibrant new civic environment.

We would have settled for just content people. They were nowhere to be found.

It seems there is no life that is not deeply affected by the sputtering economy and the political chaos. Interviews with Cairo residents revealed, perhaps unsurprisingly, a city weighed down by the burden of uncertainty.

Engulfed in a weeks-long upheaval sparked by Egyptian President Mohamed Morsi’s authoritarian-style power grab, Egyptians say there are few things to be happy about.

“I hope that this is just a phase, and what comes next is better,” said 31-year-old Mostafa Mahmoud, the owner of a small kiosk selling chips, soda and biscuits on a busy Cairo street. In another country, he said, he would have a good degree and his own business.

“We’ve now reached a place that is so hopeless,” he said. “I just want a quiet life of freedom. But how can I plan for this?”

Even the unaffiliated are politicized by the mayhem. Abdel Kader, a cheerful man who asked that his real name not be used, works as a household cleaner in the capital. He had attended a few protests in the past, but does not subscribe to any political parties or ideologies, he said.

As he spoke to GlobalPost, he casually produced a bullet from his pocket. He said he had picked it up from the ground during deadly clashes between opposition protesters and Morsi supporters outside the presidential palace last week.

“They were firing at us,” he said of Morsi’s supporters. “Where are our rights?”

Last month, Morsi granted himself broad powers to prevent the nation’s top court from dissolving Egypt’s constitution-writing committee, which is stacked with his allies.

The Muslim Brotherhood, Morsi’s former organization, then pushed through a draft constitution that lacked the backing of Egypt’s Coptic Church or secular groups. A controversial referendum on the constitution will begin on Dec. 15.

In the meantime, protests have been a near-everyday occurrence. Egyptians across the political and economic strata are struggling to find the silver lining.

Even musicians are glum. In Egypt’s normally vibrant, if saccharine, music business, songwriters worry that a prolonged economic slump will cripple sales.

They also worry that the more radical among the newly-empowered Islamists will move to shut down their trade, says Cairo-based songwriter, Abdul Rahman AbalKhail.

Hardline Salafi Islamists have already staged disruptive sit-ins outside a media production building on the outskirts of Cairo, protesting what they say is an anti-Islamist slant.And Egypt’s liberal elite generally fear Islamist rule will threaten their individual freedoms.

34-year-old Sarah Ebeid, an employee at Nokia, has participated in the anti-Morsi protests and supports the opposition. But she is anxious over what the unrest is doing to her wealthy and once-peaceful neighborhood, which abuts the presidential palace.

“This area was very safe, and we live across the street [from the palace],” she said. “My parents want to leave. We are locking the buildings with a key. We are doing things we usually don’t do.”

For their part, the urban poor are grappling with an economic slowdown and rising prices. A stock market crash — a reaction to Morsi’s decree — knocked the Egyptian pound to its lowest value against the US dollar in eight years.

“The only good thing is that we are having a conversation. But it’s still violent,” said 27-year-old Ahmed Ibrahim, a pastry baker in the capital. “I can say that nothing truly good has happened in months — there is no reason to be happy.”

Ahmed Arafa, 60, has been running his newsstand in the heart of Cairo for decades, and says newspaper sales are up “because people want to know what is happening.”

But his customers are all worried, he said, and even a rise in sales cannot fend off the affects of the chaos.

“Of course I am affected by the crisis,” Arafa said. “Do I not live in this country?”

Just down the street was 80-year-old Khalil Sadiq, smiling joyously as he chased down an empty cardboard box blown out of his store by a wintry gust of wind.

He was the first person in several city blocks that seemed genuinely happy.

“Do you know?” Sadiq said when GlobalPost approached him. “That I am actually the last King of Egypt?”