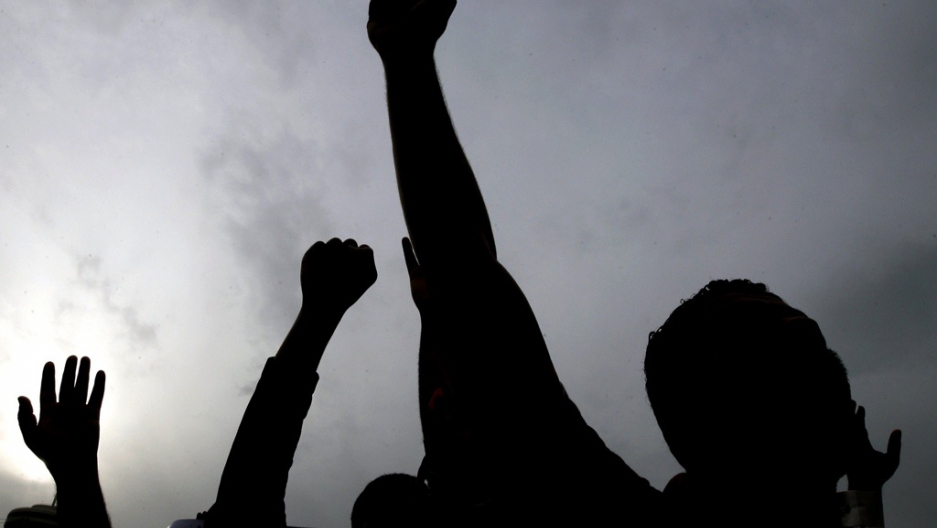 They were showing solidarity with peaceful demonstrations calling for an end to the country’s dictatorship.

Within a week of the first protests on Feb. 14, the country’s labor union federation called a general strike. But the protests, including a second general strike, were short-lived.

With the help of Saudi Arabian troops, the Bahraini monarchy tried to crush the revolt with tanks, tear gas and live ammunition.

More than 4,500 workers were fired for their alleged participation in the general strikes, and their fate has now become a major rallying point for the opposition, which has been weakened but not defeated.

It has also sparked a divide between pro- and anti-government labor groups, and has prompted unions in the United States to call on the Obama Administration to revisit its free-trade agreement with this key Washington ally.

On one recent day, Tawaa al Wadi sat quietly in a union hall packed with fired workers. Wearing the all-black chador of observant Shiite Muslims, she explained how she lost her job, a day after the general strike in February 2011.

The company never explained why she was fired. Still without a job a year later, her employer offered her a job doing manual labor in the company cafeteria or laundry room.

“I wanted to return to my senior secretary job,” Al Wadi said. “The manager said no, it’s been restructured.”

Since the general strike, Bahrain’s Labor Ministry says all public sector workers have been rehired and only 2 percent in the private sector, or 176 people, remain out of work. The General Federation of Bahrain Trade Unions, however, says the number is closer to 500, and many others were asked to accept lower status jobs. Few received back pay.

Al Wadi’s story, critics say, illustrates how the monarchy, away from the street and the public eye, has wielded its power against the opposition, exacting revenge against citizens who spoke up for their rights.

Critics say the government, in its attempt to divide the opposition, backed a new union umbrella group — the Bahrain Free Labor Union Federation — that promotes itself as “non-political.” The new group supports the government on most labor issues, including the matter of fired workers.

The new federation’s leaders also oppose the demonstrations and general strikes. “To improve the lives of our members, we have to support the government,” said Hamad Al Thanadi, vice chair of the new federation.

“The government is trying to create a federation it can control,” he said.

Whether aligned with the government or not, the new federation has had success recruiting affiliates. While the original union federation says it has 30,000 members, the new organization says it already has 5,900, with another 11,000 set to join soon. Bahrain has a labor force of 557,000, including migrants from abroad.

Unions have long occupied a grey area in Bahrain. They were outlawed after the country’s 1971 independence from Britain. In 2002, the newly enthroned King Hamad bin Isa al Khalifa enacted reforms that allowed one union per workplace and one overarching national union federation.

For about 10 years, the government tolerated the union federation as part of the loyal opposition.

That tolerance quickly collapsed in February 2011 when — taking inspiration from the Arab Spring uprisings in Tunisia and Egypt — Bahraini demonstrators peacefully occupied the Pearl Roundabout, the central driving circle in Manama.

Within weeks, the government called in troops from Saudi Arabia and imposed martial law. The army and police attacked the Pearl Square encampment and subsequent demonstrations. At least 70 people have died over the past 22 months.

“Some members want complete political reform,” through removal of the monarchy, he said. “Some want a constitutional monarchy. Generally, we support the King’s original project when he said he wants Bahrain to be a model of democracy.”

“These are not union demands,” responded Yaqoob Mohammad, chair of the new union group. Unions should focus on wages and working conditions, not politics, he said.

During the spring and summer of 2011, the government grew increasingly worried about the General Federation’s new militancy. In October, the government issued a royal decree that allowed multiple unions in one workplace, reversing the previous decade-old policy. The move gave the new federation an opportunity to undermine the old one.

The government, meanwhile, has also stoked divisions between Sunni and Shiite Muslims. Shiites make up 70 percent of Bahrain’s population. The monarchy, which is Sunni, has painted the uprising as predominantly Shiite, promoting fears of Iranian influence and pushing the conflict toward a sectarian battle.

These divisions are now playing out between the two union federations. The new federation has been forming mostly Sunni-based unions to swell its ranks.

Mohammad, from the new federation, argues that the Al Wefaq Islamic Society, the largest opposition group, controls the General Federation of Bahrain Trade Unions. The government portrays Al Wefaq as extreme Islamists, which most analysts agree is an unfair label.

Radhi said while he is a member of Al Wefaq — and that the Al Wefaq has many supporters in the General Federation leadership — it includes many political viewpoints.

“There is no dominant ideology,” he said. “Our work is based on trade unions.”

The new group’s leadership argues that unions should cooperate with management and the government, and abstain from politicking.

International pressure is growing against the Bahrain government’s labor practices. The International Labor Organization ruled against Bahrain in the dispute over rehiring fired workers.

The AFL-CIO filed a complaint last year with the US Department of Labor, calling on the United States to withdraw from its Free Trade Pact with Bahrain.

The complaint noted, “The US should simply not provide preferential trade treatment to a country that has and continues to engage in well documented, widespread and serious violations of human rights, including labor rights….”

Cathy Feingold, director of the AFL-CIO International Department, hopes an official Department of Labor finding is made public soon. She said in a phone interview from Washington, DC that the next step would be for the US and Bahrain to hold consultations. She doesn’t realistically expect the United States to cancel the trade pact.

“Bahrainis are very sensitive to their brand as a country. We hope release of the report will add further pressure to stop the attacks,” she said.

During the meeting of fired workers, unemployed secretary al Wadi said she’s not giving up hope. The workers plan court cases and other pressure tactics. And she doesn’t regret her actions of last year.

“We want our rights,” she said simply.