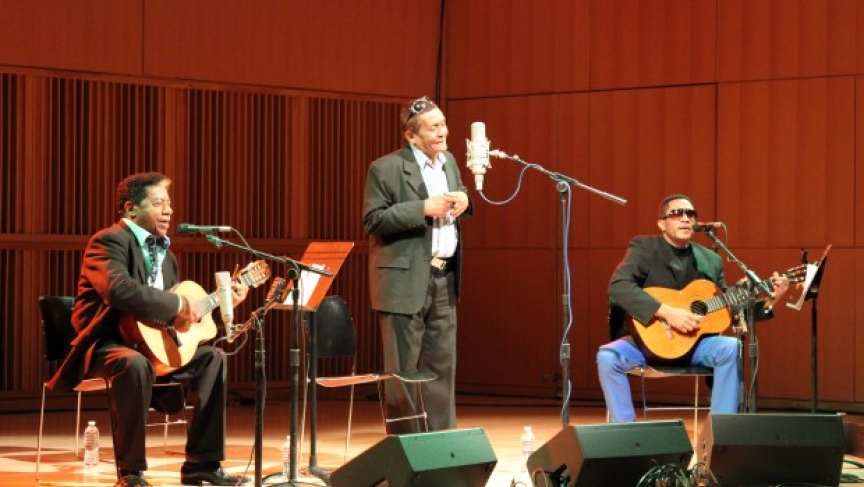 Share
A recent concert in New York City brought two generations of musicians together to pay homage to bachata, a style of music born in the Dominican countryside more than 50 years ago. At the end of October in New York City, two generations of bachata musicians gathered to pay homage to the classic style of the music–an acoustic, earthy brand that comes from the Dominican Republic's rural north. That's where guitarist Edilio Paredes and singer Ramon Cordero started playing it in the 1950s, and where singer Andre Veloz first heard it many years later. Edilio Paredes says his relationship with Ramon Cordero is like that of a finger to a fingernail. "We were born in the same place, we were raised together," Paredes said, reminiscing in Spanish in the dressing room after the show. "Since we were kids we were always together, together, together—never separated. And we have always understood one another. The most important thing in a partnership is one understanding the other." You can hear that understanding as Paredes's guitar weaves around Cordero's lithe, plaintive voice. They've been playing music together for more than 50 years; they grew up near each other in the Dominican Republic's Duarte Province. One song from their October 24th performance at the CUNY Graduate Center in Manhattan, part of the Live @ 365 world music series, "Condenado a la Distancia," has been in their repertoire since the late 60s. "The song is about someone who leaves a person behind," Ramon Cordero explained in Spanish. "A woman goes away and leaves someone waiting. Like a mother who goes out to get something, a bit of milk, and she never returns. She leaves him there … condenado a la distancia. They say the distance causes one to forget and so you stay there waiting." The song has one of bachata's main ingredients–amargue–a kind of bittersweet melancholy; a recognition of life's sadness. Amargue runs through bachata's songs, and its history. Through the 70s, the music was marginalized–associated with poor campesinos and kept off most radio stations. "In those years, bachata was solely … it wasn't always shunned but they treated it as if it was low class," Paredes said. "It was like a vulgar, poor-people music," singer Andre Veloz said. "And now everybody sings it, and now everybody enjoys it. And even now, people who say they don't do, because they are too fine for it, still do it." Veloz shared the stage with Paredes and Cordero in New York. She's in her 20s, and lives in the Bronx now. She grew up in the Dominican countryside not far from where the two bachata elder statesmen are from. Music by them and other classic bachateros played around the house while she was growing up. "And that is what the maids used to put all day—bachata bachata—old styles, old school, very cool. And I remember everybody was like 'Aw stop listening to that, that's not for ladies.'" Veloz says that she always has to fight against that not-for-ladies stereotype. "It's just very disappointing and frustrating. And I really hope that very soon more places will open for more women–not only in bachata, but in Latin music in general. And, yeah, I'm looking forward to being part of that." Ramon Cordero returned to close the night with another helping of amargue—the song "Adios." "Life is so unjust," one of the lyrics goes, "how cruel it has been to me; It has condemned me to live without the sweet warmth of your love. Adios."